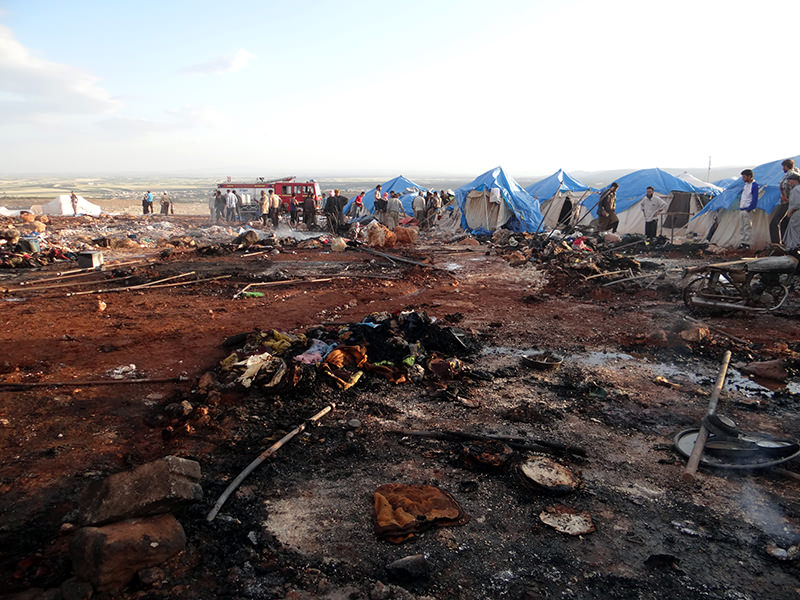 Airstrikes hit a refugee camp in the north of Syria near the border with Turkey, leaving at least 28 killed. (AA Photo)
by Daily Sabah with Agencies May 05, 2016 12:00 am

Airstrikes hit a refugee camp in northern Syria near the Turkish border, killing at least 28 and left dozens injured, a monitor said Thursday.

Women and children are among the dead, the Syrian Observatory for Human Rights said.

The number of dead at the camp near the town of Sarmada is expected to rise because of the number of seriously injured people, the U.K.-based watchdog added.

U.N. High Commissioner for Human Rights Zeid Raad al-Hussein said the attacks were almost certainly a deliberate war crime. "Given these tent settlements have been in these locations for several weeks, and can be clearly viewed from the air, it is extremely unlikely that these murderous attacks were an accident," Hussein said in a statement. "My staff, along with other organizations, will leave no stone unturned in their efforts to research and record evidence of what appears to be a particularly despicable and calculated crime against an extremely vulnerable group of people," he said. "Initial reports suggest the attacks were carried out by Syrian Government aircraft, but this remains to be verified."

Footage shared on social media showed rescue workers putting out fires, which still burned among charred tent frames pitched in a muddy field. White smoke billowed from smoldering ashes and a burned and bloodied torso could be seen. Hussein said most of the people in the camps had been forced to flee their homes in Aleppo in February because of sustained aerial attacks there. He said he was also alarmed about the situation in Syria's Hama central prison where detainees had taken control of a section of the prison and were holding some guards hostage. "Heavily armed security forces are surrounding the prison and we fear that a possibly lethal assault is imminent. Hundreds of lives are at stake, and I call on the authorities to resort to mediation, or other alternatives to force," Zeid said. He urged governments on the U.N. Security Council to refer Syria to the International Criminal Court so that there is "a clear path to punishment for those who commit crimes like these."

Sarmada lies about 30 kilometers west of Aleppo, where a cessation of hostilities brokered by Russia and the United States had brought a measure of relief on Thursday. It was not clear who had carried out the airstrike and the observatory did not immediately have a breakdown of the casualties.

"Two missiles fell near the camp causing people to panic and two more fell inside where a dozen tents caught fire," he said.

"If this obscene attack is found to be a deliberate targeting of a civilian structure, it could amount to a war crime," O'Brien said.