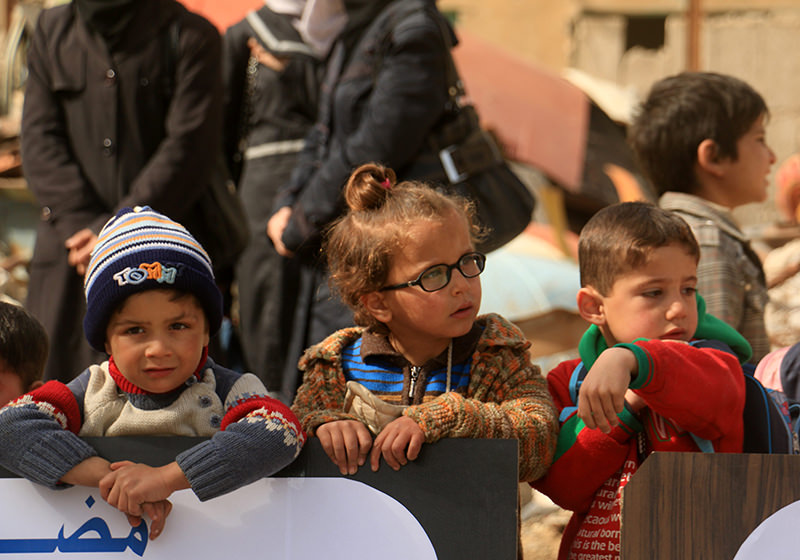 A joint aid convoy was denied entry at the Syrian regime checkpoint on its way to Darayya, where residents are suffering from severe food shortages and malnutrition. If allowed to enter, it would have been the first such delivery to its residents since 2012

An aid convoy was denied entry to Darayya, Syria, Thursday, the Red Cross said, dashing hopes for the first such delivery since regime forces began a siege of the opposition-held town in 2012. Further north in the province of Idlib, unidentified aircraft launched more than 60 raids targeting a military airport controlled by al-Qaida's Syrian affiliate, al-Nusra Front, and allied fighters, killing 16 militants, a monitor said. Meanwhile, a truce in Syria's battleground city of Aleppo expired, with no new last-minute prolongation after it had been extended twice through last-minute intervention by Moscow and Washington.

The five-truck convoy Darayya organized by the International Committee of the Red Cross (ICRC), the United Nations and the Syrian Arab Red Crescent had been due to deliver baby milk and medical and school supplies to Darayya. "We urge the responsible authorities to grant us access to Darayya so we can return with desperately-needed food and medicines," said the ICRC after the convoy was refused entry. A U.N. official said it had decided against going ahead with the convoy after "nutrition items" were removed. U.N. special envoy for Syria Staffan de Mistura and the resident humanitarian coordinator had "decided to abort the mission to Darayya because of the removal of nutrition items for children other than vaccines from the U.N. convoy at the last checkpoint," U.N. spokesman Stephane Dujarric said.

The U.N. said this month that Syria's government was refusing U.N. demands to deliver aid to hundreds of thousands of people. "Despite having obtained prior clearance by all parties that it could proceed," the convoy was not allowed through, a statement from the ICRC and U.N. said. "Darayya has been the site of relentless fighting … and we know the situation there is desperate," said Yacoub El Hillo, U.N. Humanitarian Coordinator in Syria.

Darayya had a pre-war population of about 80,000 people but that has dropped by almost 90 percent, with the remaining residents suffering from severe shortages and malnutrition. In a video posted by the town's council on Facebook, residents begged for food and drink. "We don't want books or pens. We don't want just medicine," said one young woman clutching a baby, her voice breaking. "We want to eat. We want to drink."

World powers are to meet in Vienna next week to try to push faltering peace talks toward ending a five-year conflict that has killed thousands of people. They hope a broad cease-fire in Syria could help the flow of desperate needed relief supplies to reach people trapped by fighting and violence. At least one civilian died in regime shelling in the town on Thursday afternoon, said the Syrian Observatory for Human Rights. In Aleppo, emergency workers reported no deaths in eastern opposition-held areas since the local truce expired on Wednesday night. But two civilians including a woman died from sniper fire on the divided city's regime-controlled west, according to the observatory. That truce came after a spike in violence that killed more than 300 civilians on both sides of the city last month.

The last round of peace talks in Geneva reached a deadlock in April when the main opposition group suspended its participation over mounting violence and lack of humanitarian access. Talks have also faltered over the fate of Bashar Assad, with the opposition insisting any peace deal must include his departure. "My priority is how we can resolve this crisis through political dialogue," said U.N. Secretary-General Ban Ki-moon.

The head of Syria's main opposition group, Riad Hijab, earlier called for tougher action against Assad, whom he claimed had effectively received a "green light" from Moscow and Washington to continue bombing civilian areas.

Millions have fled Syria's conflict since it started with anti-government protests in 2011. These include 20 percent of Syria's Palestinian refugees, the head of the U.N. Palestinian refugee agency said Thursday. Before the war, Syria was home to about 560,000 Palestinians whose ancestors fled the 1948 foundation of Israel and ensuing conflicts.

In March, another attempt to deliver aid to six besieged towns in Syria was hindered by the Syrian regime. U.N. humanitarian advisor Jan Egeland said it was "a violation of international law to prevent us from going." According to the U.N. World Food Programme, roughly 485,000 people in 18 besieged areas of Syria – the most notable of which is Madaya – face rapidly deteriorating conditions due to the lack of humanitarian assistance.