Jolie says US, EU in 'race to the bottom' with isolationist policies over Syrian crisis 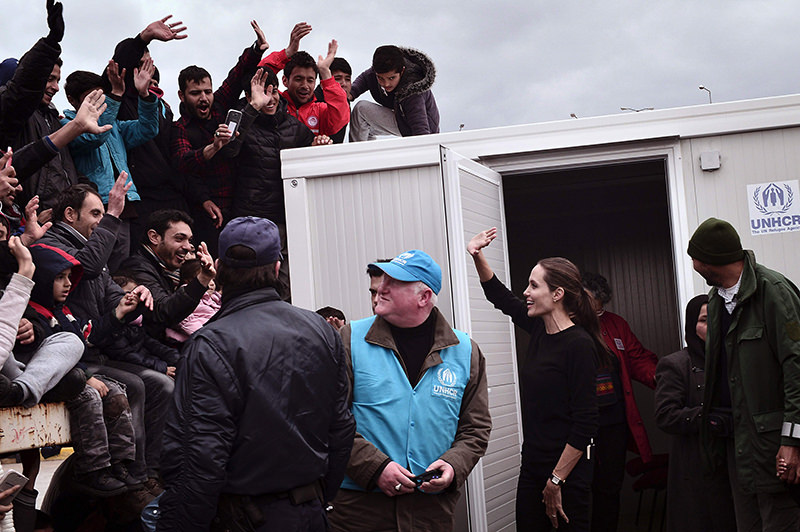 This file photo taken on March 16, 2016 shows UNHCR's Goodwill Ambassador Angelina Jolie Pitt greeting (C) refugees and migrants during her visit to the port of Piraeus on March 16, 2016. (AFP Photo)
by Compiled from Wire Services May 16, 2016 12:00 am

Angelina Jolie says she is "very disheartened" by the U.S. response to the global migration crisis, and fears countries will adopt increasingly isolationist policies instead of acting together to tackle the challenge.

Jolie, special envoy for the U.N. refugee agency UNHCR, said she was disappointed in some politicians for fear-mongering and a "race to the bottom" approach to the refugee crisis.

The special envoy for the United Nations refugee agency said Monday that worries about uncontrolled immigration has given a "false air of legitimacy to those who promote politics of fear and separation."

"It has created the risk of a race to the bottom, with countries competing to be the toughest," she said at a migration event sponsored by the BBC in London.

She said nations need to pull together to deal with the world's 60 million displaced people by rebuilding a coordinated and orderly system for dealing with refugees and migrants.

"I have been very, very disheartened by my own country's response to the situation," Jolie said.

She referred to Republican presidential contender Donald Trump, who suggested a temporary ban on all Muslims entering the U.S. in the wake of attacks by extremists.

"To me, America is built on people from around the world coming together for freedoms, and especially freedom of religion," she said. "And so it is hard to hear that this is coming from someone who's pressing to be an American president."

Global leaders must come together to tackle a 'once-in-a-generation' migrant crisis, she said, or risk greater instability that could drive more refugees to Europe.

The United Nations and the declaration of human rights were among the world-changing outcomes of the global refugee crisis after World War Two, Jolie said, adding that the international community is now at a similar pivotal moment.

"I believe this is again that once-in-a-generation moment when nations have to pull together," the Hollywood actress and director told the BBC.

"How we respond will determine whether we create a more stable world, or face decades of far greater instability."

Jolie said inaction or uncoordinated efforts that did not address the underlying causes of the crisis would only lead to more conflict and displacement.

"If these things continue to happen, there will be further displacement and more people on the borders of Europe and elsewhere," she said.

Europe is grappling with its largest migration wave since World War Two, as a traditional flow of refugees from Africa is compounded by those fleeing wars and poverty in the Middle East and South Asia.

The U.N. refugee agency has said the number of people forcibly displaced worldwide was likely to have "far surpassed" a record 60 million in 2015, including 20 million refugees, driven by the Syrian war and other drawn-out conflicts.

The Oscar-winning actress argued against closing borders to refugees and migrants.

"If your neighbour's house is on fire you are not safe if you lock your doors. Isolationism is not strength," she said.

European Union leaders, alarmed by an influx of one million refugees and migrants into the bloc of 500 million people, struck an accord with Turkey in March that would grant Ankara more money to keep Syrian refugees on its territory.

The deal sealed off the main route by which a million migrants crossed the Aegean into Greece last year, but some believe new routes will develop through Bulgaria or Albania as Mediterranean crossings to Italy from Libya resume.