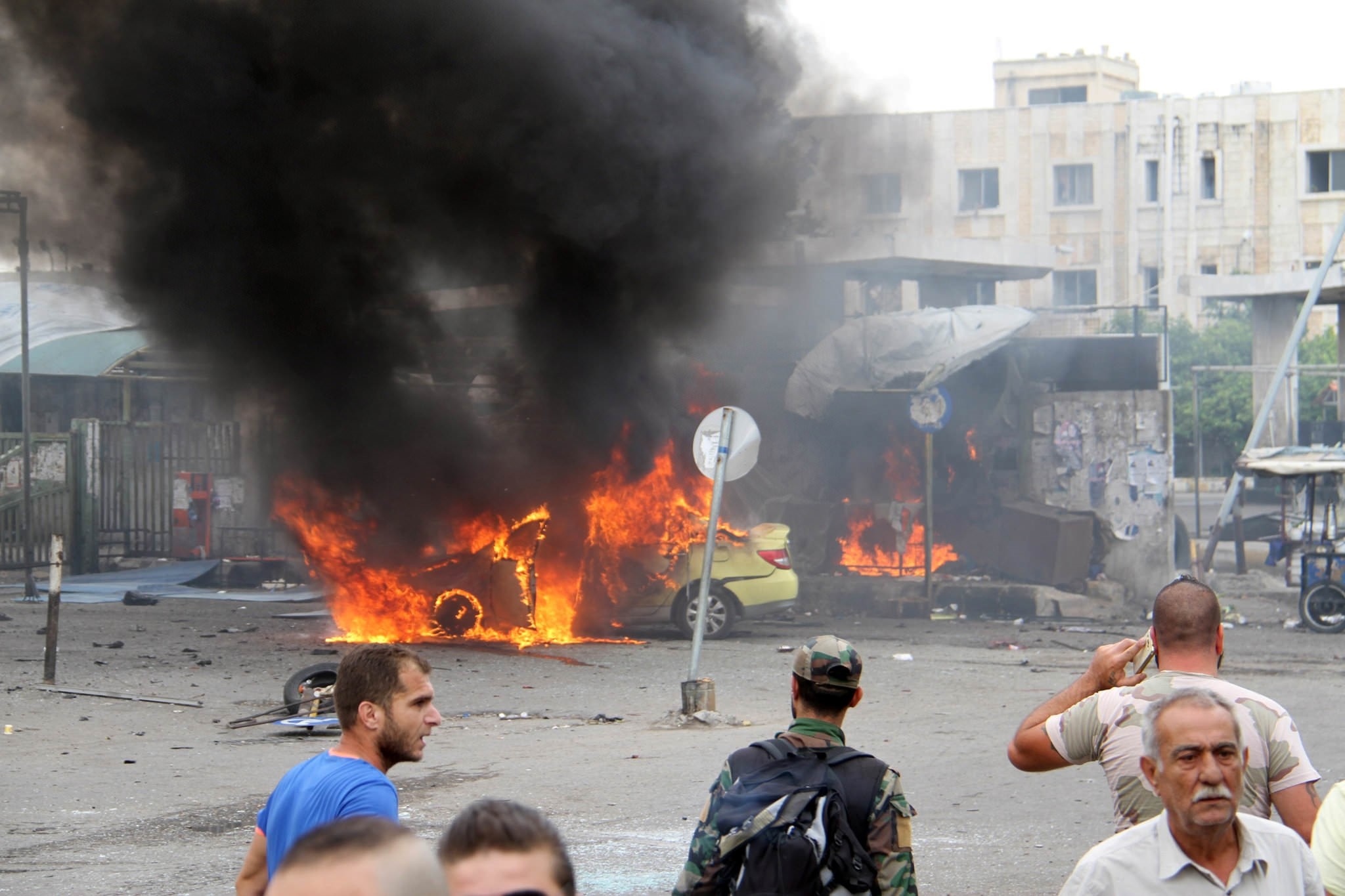 A Syrian army soldier and civilians inspect the damage after explosions hit the Syrian city of Tartous, in this handout picture provided by SANA on May 23, 2016.
by Daily Sabah with Agencies May 23, 2016 12:00 am

The Daesh terror group has claimed a spate of bombings in two Syrian regime stronghold cities, which the london-based Syrian Observatory for Human Rights said killed at least 148 people and wounded 200 on Monday.

The terrorist group's Amaq news agency said Daesh attackers had targeted "gatherings of Alawites in Tartous and Jableh", a reference to the minority sect to which Syria's Bashar Assad belongs.

In the attacks by at least five suicide bombers and two devices planted in cars killed nearly 150 people and wounded at least 200 in Jableh and Tartous on Syria's Mediterranean coast on Monday in regime-controlled territory that hosts Russian military bases, monitors and Syrian media said.

Syrian media had said 78 people had been killed in what is Assad's coastal heartland.

The attacks were the first of their kind in Tartous, capital of Tartous province and home to a Russian naval facility, and in Jableh in Latakia province, near a Russian-operated air base.

U.N. Secretary General Ban Ki-moon condemned the attacks and a spokesman said Ban took "note with great concern of the escalating military activity in many areas in and around Damascus".

One of the four blasts in Jableh happened when a man walked into a hospital emergency department and blew himself up. Another blast was at a bus station. The Tartous bombs also targeted a bus station, the Observatory and state media said.

Younes Hassan, a doctor working at the Jableh hospital, said he heard an explosion at the bus station, followed less than a minute later by the blast at the hospital.

The Tartous explosions also occurred in quick succession, no more than 10 seconds apart, a driver at the bus station said.

"People began running but didn't know which direction to go, cars were on fire, there was blood and bodies on the ground," Nizar Hamade said.

Daesh claimed the attacks in a statement posted online by the group's Amaq news agency, saying its fighters had targeted "gatherings of Alawites".

Syria's Information Minister Omran al-Zoubi said in an interview with Ikhbariya that terrorists were resorting to bomb attacks against civilians instead of fighting on the front lines, and vowed to keep battling them.

The Observatory said an area of Tartous hosting internally displaced Syrians near a blast site was briefly attacked by regime supporters in reaction to the bombings. Some tents were burned but nobody was killed.

Tartous governor Safwan Abu Saadah told Reuters that reports on social media about refugees being shot and tents being burned down were not true. He said some Tartous residents had gone to refugee areas to protect them from possible attacks.

"Two days ago some camps in Tartous province experienced fires because of electrical problems ... today's reports that people burned (these camps) are not true. Nobody would turn against our guests in this way," Abu Saadah said.

Bombings in the capital Damascus and western city of Homs this year killed dozens of people and were also claimed by Daesh, which is fighting against regime forces and their allies in some areas, and separately against its rival al Qaeda and other terrorist groups.

Latakia city, which is north of Jableh and capital of the province, has been targeted on a number of occasions by bombings and rocket attacks by terrorists, including late last year.

Regime forces and their allies have recently stepped up bombardment of areas in Aleppo province in the north, which has become a focal point for the escalating violence.

The only road into rebel-held areas of Aleppo city has suffered a week of increasingly heavy air strikes. Zakaria Malahefji, a senior official in the opposition group Fastaqim that operates in the Aleppo area told Reuters that the road was heavily bombarded again on Monday and was dangerous to use.

He said Iranian-backed fighters, who are supporting regime forces, were mobilising in the southern Aleppo area.

France's foreign ministry called the Tartous and Jableh bombings "odious", and said violence from all sides must stop if a political transition is to take place.