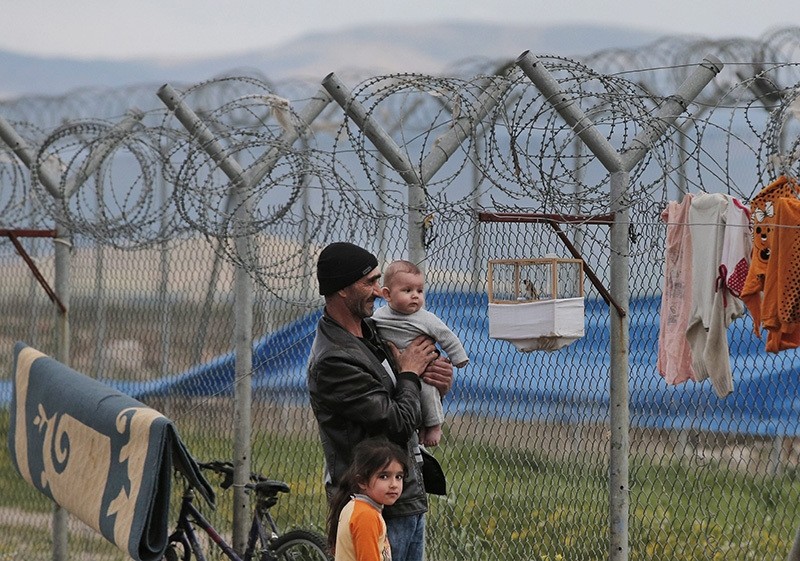 File photo of Syrian refugee Abdullah Koca, 43, who fled Syria 4-years ago and has been living at a refugee camp for Syrian refugees in s.eastern Turkey (AP)
by May 26, 2016 12:00 am

The global community should step up its assistance in the current refugee and migration crisis, EU President Donald Tusk said on Thursday, the first day of the G7 summit in Japan.

The European Union has been grappling with a surge in illegal migration surge that saw 1 million people reach the continent last year, mostly from the Middle East and North Africa.

"We are aware that it is because of geography that the most responsibility is - and will continue to be - placed on Europe, however we would also like the global community to show solidarity and recognize the fact that this is a global crisis," Tusk told journalists ahead of the summit.

Tusk said he would "appeal to G7 leaders" to boost public assistance to refugees and host communities.

Thursday's summit in the coastal city of Shima will begin with a working lunch. Ahead of that, Japanese prime minister and summit host Shinzo Abe took the G7 leaders to the Ise Grand Shrine, the most sacred site in Shinto, Japan's indigenous religion.

Abe said he wants to focus the two-day summit on economic challenges and efforts to reboot global growth.

The G7 leaders are expected to promise flexible fiscal stimulus and structural reforms to counter a slowdown in emerging economies, Japanese media reported.

They are also expected to discuss the conflict in Ukraine and the role of Russia, which was excluded from the G8 in 2014 after annexing the Ukrainian peninsula of Crimea.

Moscow is accused of supporting separatists in eastern Ukraine, and has been hit with Western sanctions, with EU measures up for renewal at the end of July.

"Our stance vis-a-vis Russia, including economic sanctions, will remain unchanged as long as the Minsk agreements are not fully implemented," Tusk said, referring to the peace deal signed in the Belarusian capital.

"When it comes to the EU, we are ready to continue with our sanctions and I am quite sure that in fact we don't need a special discussion among leaders," he said, adding that he expected a decision "in the next two, three weeks."

Despite the "very positive" signal set by the release of Ukrainian pilot Nadiya Savchenko from Russian custody this week, Tusk said it was "not easy to be optimistic" about Russia's role in helping to resolve the Ukraine crisis.

The G7 comprises Britain, Canada, France, Germany, Italy, Japan and the United States, while the EU is also takes part. The 2017 summit will take place on the Italian island of Sicily, Italian Prime Minister Matteo Renzi announced on his website.