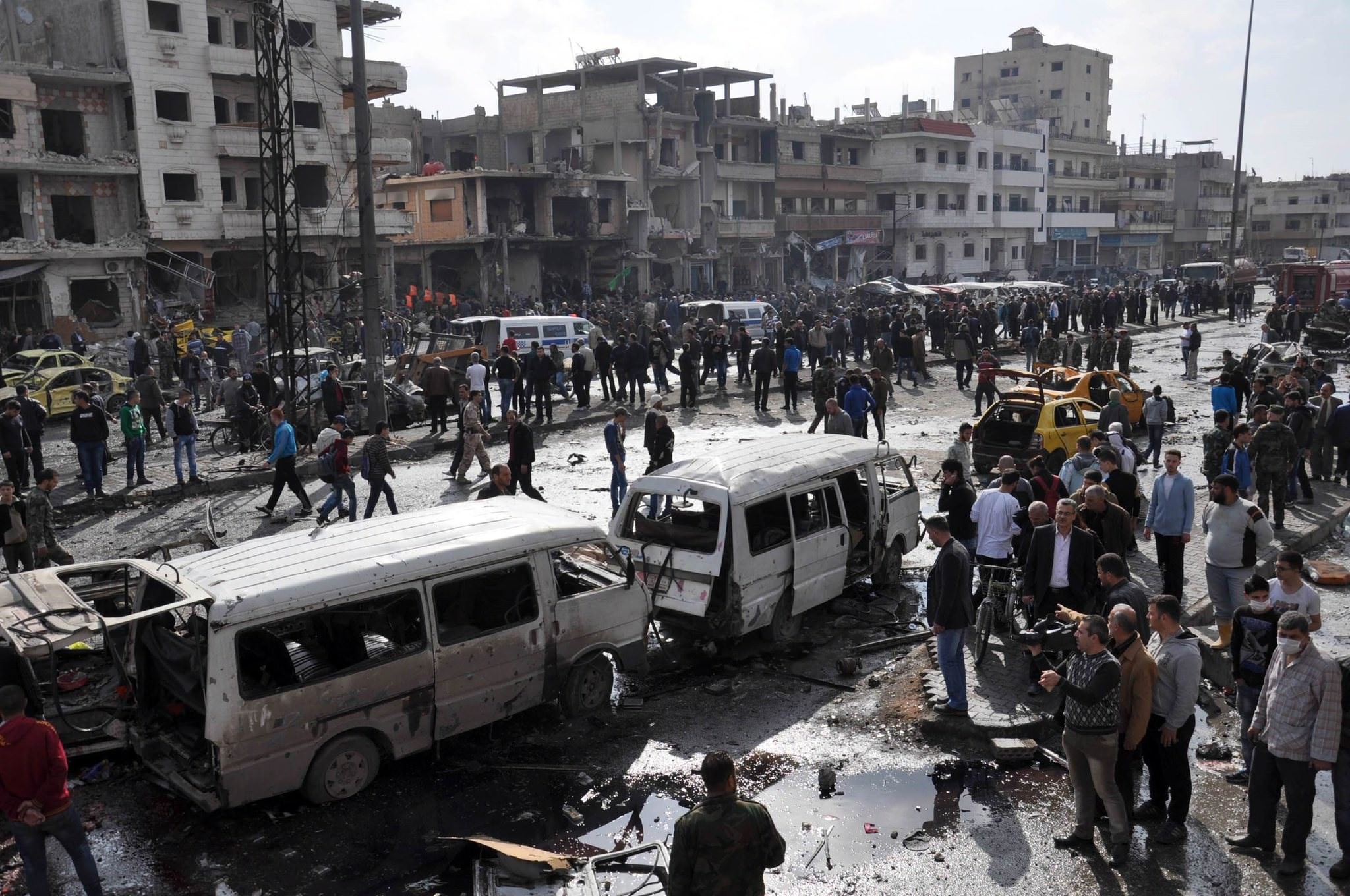 yrians gather at the site of a double car bomb attack in the Al-Zahraa neighbourhood of the central Syrian city of Homs on February 21, 2016. (AFP Photo)
by Compiled from Wire Services Jun 02, 2016 12:00 am

The UN is waiting for approval from the Syrian regime before it can airlift humanitarian aid to besieged areas, lowering expectations Thursday that the operation was imminent.

"You need the consent of the government," UN deputy Syria envoy Ramzy Ezzeldin Ramzy said at a press conference in Geneva, adding that he was not "aware" of any such permission.

"I don't think there is something imminent," he cautioned.

"WFP has studied the issue and is in the process of finalising its plans," Ramzi said, but added that it was "a very complex venture," and would require approval from Damascus, which has yet to be given.

He said the airdrops would be "put into effect at the earliest possible date."

His comments came after France and Britain on Wednesday called on the UN to urgently begin the aid deliveries by air.

Last month, the 20-nation International Syria Support Group agreed that if aid convoys over land had not reached all besieged areas by June 1, drops from aircraft would be used.

De Mistura said last week it can take six weeks of airdrops to deliver the same amount of aid to an area as a single land convoy.

Since April, WFP has been carrying out dangerous and complex high-altitude airdrops over Deir Ezzor, where 200,000 people are besieged by the Islamic State group.

Most of the other besieged areas would likely need to be reached by helicopter, Jan Egeland, who heads an international humanitarian taskforce for the war-ravaged country, told reporters.

The total number of areas under siege in Syria is 19, with a total population of 592,000, most of them surrounded by regime forces, according to UN figures.

Humanitarian access to these areas has been a key sticking point in stalled UN-backed peace talks aimed at ending the five-year war that has killed at least 280,000 people and displaced millions.

Questions have also been raised as to whether airdrops are needed, after a local truce on Wednesday allowed desperately needed aid to be delivered by land to two towns besieged by government forces.

Moscow, which helped ensure the convoys got through, suggested they might mean plans to airdrop relief could be put on hold for now.

But Britain and France insisted aerial aid was still needed, with British envoy Matthew Rycroft insisting Wednesday's deliveries were "too little, too late".

The Syrian opposition has criticised the fact that no food was on the Daraya convoy but Egeland said it had only been meant to bring in vaccines and baby milk, with a second convoy carrying food expected "soon".

He said Daraya and Moadamiyeh were among 11 besieged areas the UN expected to reach in the next few days, including five areas in Eastern Ghouta and three areas not previously reached: Zabdine, Erbine and Zamalka.

"There is more success possibly in these hours and the coming days than in a long time," Egeland said.