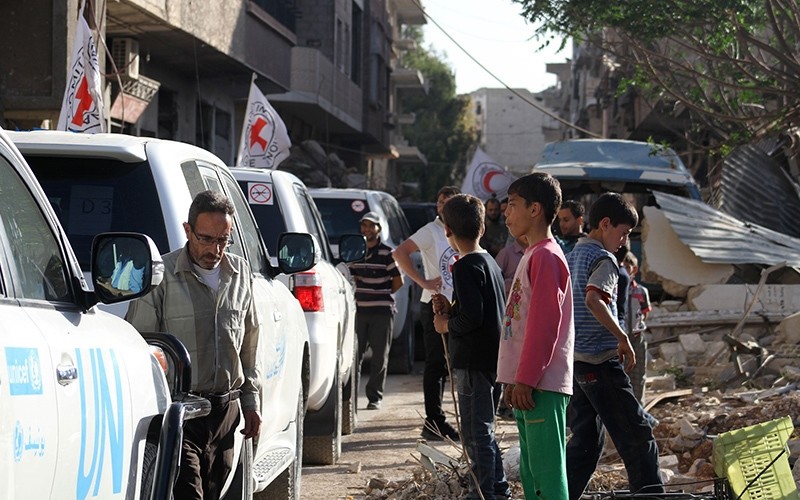 Vehicles of the International Committee of the Red Cross (ICRC), the Syrian Arab Red Crescent and the United Nations wait on a street after an aid convoy entered the rebel-held Syrian town of Daraya (AFP Photo)
by Anadolu Agency Jun 03, 2016 12:00 am

A recent humanitarian aid summit in Istanbul proved that the current global assistance system is not working well and needs a radical change, a U.S.-based nongovernmental organization chief said Thursday.

Following the summit late last month, several panelists from U.S.-based non governmental organizations and the American government discussed the issue during a panel discussion at the Institute of Peace (USIP) in Washington DC.

The overall outcome of the discussion was that the current system for humanitarian aid assistance has to be improved as the international community has failed to help countries in crisis such as war-torn Syria where more than 250,000 victims have been killed since 2011, according to UN figures.

The humanitarian aid system that has been led by the UN since the end of World War II "is perhaps not fit for purpose for the 21st century," said Oxfam America President Ray Offenheiser. "That means it needs a radical overhaul."

He stressed that it was an obvious need as the world has seen the largest migration during the Syrian war since the World War II.

Offenheiser added that he hoped to see "improvements" in the report about the results of the Istanbul summit that UN Secretary General Ban Ki-Moon will release in September during the organization's General Assembly meeting.

"Instead of individual projects, we have a shared focus on the outcomes of the need for greater resilience for being able to get ahead of conflict," Lindborg said, adding that ways of how the aid was financed and reported were among the discussions at the summit.

"I'm enormously encouraged by all of this," she said.

A representative for the U.S. Agency for International Development, Thomas Staal, said organizations are doing their best to a certain extent but a larger movement is needed.

"When you don't have an intergovernmental you can't really bring strong commitments with teeth," he said.

"In a number of ways, we can take a leadership role in providing a voice for these kind of issues on the humanitarian side."