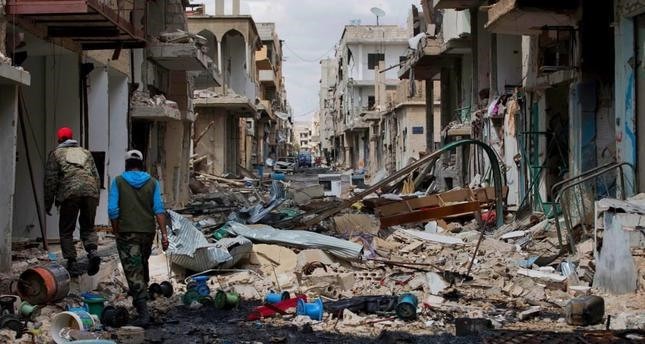 People walk through a devastated part of the town of Palmyra as families load their belongings onto a bus in the central province of Homs, Syria on April 14. (AP Photo)
by Jun 03, 2016 12:00 am
Syrian regime gave the United Nations and the Red Cross approval on Thursday to send humanitarian aid convoys into at least 11 of 19 besieged areas during June after the United States and Britain called for air drops due to a lack of access.

In a statement the Syrian Mission to the United Nations named the besieged areas of Kafr Batna, Saqba, Hammura, Jisrein, Zabadin, East Harasta, Zamalka, Madaya, Foua, Kefraya and Yarmouk on its approved list, along with some 25 other areas.

It also named two other besieged areas - Daraya and Douma - on a list of eight places approved to receive medical assistance, school supplies and milk for children.

Daraya has not received food since 2012 and the United Nations said a delivery planned for Friday has been delayed. Daraya was not on the Syrian list of approved destinations for humanitarian relief convoys.

However, Jan Egeland, chairman of the U.N. humanitarian task force, said there were "clear indications" that a food convoy would go to Daraya within days.

Last month members of the International Syria Support Group, which includes Russia and the United States, agreed that the U.N. World Food Program should air drop aid to Syria's besieged communities if land access was denied to any of them.

Syria's opposition has warned the government may open the door just enough to defuse international pressure before restricting access again.

U.N. aid chief Stephen O'Brien is to brief the U.N. Security Council on Friday on the situation. The World Food Program would need Syrian government approval to carry out any air drops, diplomats said.

"We call on the (Syrian) regime to provide land access and if they're not going to do that, then to allow air drops to deliver aid to these people," British U.N. Ambassador Matthew Rycroft said on Thursday.