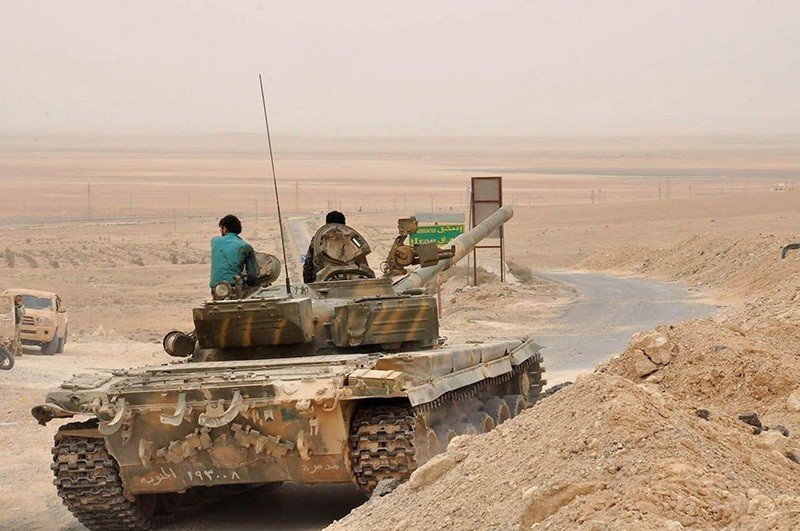 Syrian soldiers sit on a tank during fighting between regime forces and Daesh militants in Palmyra, March 28, 2016. (File Photo)
by Compiled from Wire Services Jun 04, 2016 12:00 am

The Syrian regime forces have crossed the boundary of Raqqa province after advancing in a major Russian-backed offensive against Daesh militants, the Syrian Observatory for Human Rights, a group that monitors the war, said on Saturday.

Heavy Russian air strikes hit Daesh-held territory in eastern areas of Syria's Hama province, near the boundary of Raqqa province, on Friday and the regime forces reached the edge of the province.

Going on an offensive in the region for the first time since 2014, regime forces aim to reach the country's largest dam. The Tabqa Dam on the Euphrates River, 40 kilometers (25 miles) upstream from Raqqa city, is also the target of a separate offensive launched by the US-backed Kurdish-led SDF militia group advancing from the north late last month.

The lightning advance from the southwest brought government troops to within less than 40 kilometers (25 miles) of Tabqa, which is also the site of an airbase, Syrian Observatory for Human Rights director Rami Abdel Rahman told AFP.

"It seems there has been an undeclared coordination between Washington and Moscow," he added, referring to the pincer movement by the two governments' respective Syria allies.

At least 26 Daesh terrorists and nine regime troops and militia were killed in the advance, according to the Britain-based Observatory, which relies on reports from medics and activists on the ground.

Raqqa city, further east, is Daesh's de facto capital in Syria and, along with Mosul in Iraq, the ultimate target of those seeking to destroy the group's self-declared caliphate.

Regime army spokesmen were not immediately available for comment.

Arab and Kurdish fighters backed by Washington have launched an assault on the strategic Manbij pocket further up the Euphrates on the Turkish border, regarded as a key entry point for foreign fighters.

Hundreds of kilometers downstream in neighboring Iraq, elite Iraq troops have launched an assault on the emblematic Daesh bastion of Fallujah.

The three big offensives are some of the most aggressive campaigns against Daesh since it declared its aim to rule over all Muslims from parts of Iraq and Syria two years ago.