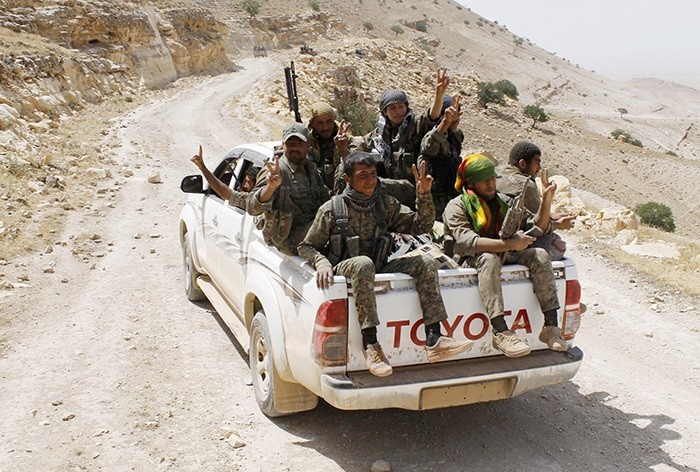 A group of Syrian Islamic scholars condemned on Thursday in a statement the practices of the U.S.-backed Syrian Democratic Forces (SDF) in areas under their control, saying they are a cover for hateful PYD militias.

"We consider the SDF nothing but a deception and cover for the secularist hateful PYD militias. This group has turned into a tool to implement foreign agendas that do not help the Syrian revolution, nor Syrian people and Kurd's interests," said in a statement the Syrian Islamic Council.

"We certainly do not support this group's ambitions to build a Kurdish entity, separate from the Syrian land," the statement added.

The statement added that the people should not give up the resistance and struggle against the invasions of the lands.

The SDF, although it includes other groups, is dominated by the Syrian Democratic Union Party (PYD) and its armed wing, the People's Protection Units (YPG), affiliated with PKK terrorists group.

U.S.-backed operations against the Daesh terror group were recently launched by the SDF to overtake the strategic northern town of Manbij, along the route to Raqqa which Daesh has claimed as its capital, by crossing the Euphrates River in Syria from the east, which Turkey has declared as a redline and a national security threat in its southern border.

Turkey argues that the YPG's aim is to expand territories under its control, while also affecting demographics in the areas it captures against the Arabs and Turkmens.

Ankara also criticizes the U.S. for supporting the PYD, which Turkey lists as a terrorist organization for its ties to the PKK, which has carried out a three-decade insurgency in Turkey's mainly Kurdish southeast.

President Recep Tayyip Erdoğan continuously called on the Obama administration to make a decision on whom to side with.

"Are you on Turkey's side or the side of the PYD, [and its armed] YPG terrorist organization?" he asked in a question pointed at the U.S. on February 10.

Despite the repeated calls by Turkey the U.S. has designated the YPG as one of its "partners."

Meanwhile, Ankara has said that the forces, which crossed the redlines, are Arab militias of the SDF, not the YPG, and that in a case where YPG crosses the red lines Turkey will take steps to intervene and protect its borders.

Ankara considers the PYD to be a terrorist organization.