Daesh claims responsibility for bombings near Damascus, at least 20 dead 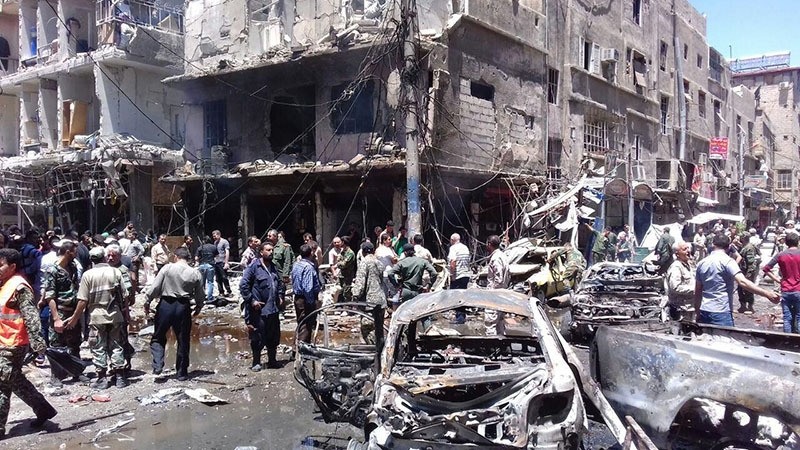 A handout picture released by the official Syrian Arab News Agency (SANA) on June 11, 2016 shows Syrians gathering at the scene of a double bomb attack outside the Sayyida Zeinab shrine (AFP)
by Jun 11, 2016 12:00 am

Suicide bombers struck outside a Shiite shrine near Syria's capital Saturday, leaving at least 20 people dead, a monitor said, in an attack claimed by the Daesh group.

The official SANA news agency said two suicide bombers, one in a car, attacked the entrance to the Sayyida Zeinab shrine, which is revered by Shiites around the world.

The Syrian Observatory for Human Rights, a British-based monitoring group, said at least 20 people were killed, including 13 civilians, and more than 30 wounded in the blasts.

Daesh claimed the attack via its Amaq news agency, saying it was carried out by three suicide bombers.

The shrine, around 10 kilometres (six miles) south of the centre of Damascus, is heavily guarded by pro-government forces but has still been the target of several attacks, including those claimed by the Daesh terrorist group.

Firefighters battled to extinguish the flames as shop signs lay in the street.

The last attack on Sayyida Zeinab on April 25 killed at least seven and wounded dozens.

A string of Daesh bombings near the shrine in February left 134 people dead, most of them civilians, according to the Observatory.

And in January, another attack claimed by Daes killed 70 people.

Lebanese Shiite militant group Hezbollah cited the threat to Sayyida Zeinab as a principal reason for its intervention in Syria's civil war on the side of Bashar al-Assad.

The shrine contains the grave of Zeinab, a venerated granddaughter of the Prophet Mohammed, and is renowned for its glistening golden, onion-shaped dome.