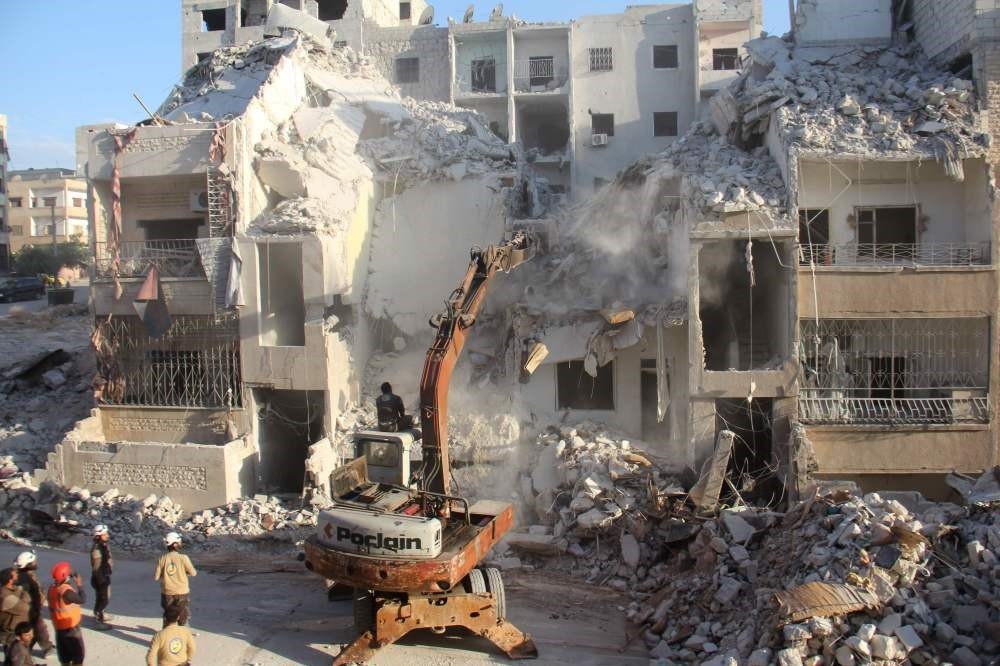 Syrian Civil Defense members search for survivors amid the rubble following reported Russian airstrikes on the Syrian northwestern city of Idlib on May 31.
by Daily Sabah with Wires Jun 25, 2016 12:00 am

The Syrian opposition High Negotiations Committee (HNC) called on U.N. Secretary-General Ban Ki-moon on Thursday to launch an investigation into their assertions that Russia has repeatedly used air-delivered incendiary weapons in Syria.

Russia deployed warplanes to Syria last year to support the regime of Bashar Assad. A crackdown by the Assad regime on pro-democracy protesters five years ago sparked a civil war, and DAESH militants have used the chaos to seize territory in Syria and Iraq.

"Russian air forces have repeatedly deployed incendiary weapons and cluster munitions to kill, main and terrorize Syrian civilians, including in at least 10 documented incidents," Riad Hijab, coordinator of the opposition HNC, wrote to Ban. "They have violated the Convention on Certain Conventional Weapons and breached international humanitarian law," he wrote. Hijab alleged that "thermite, which ignites while falling, has been likened to 'mini nuclear bombs' and was deployed repeatedly by Russian forces in residential areas." He also accused Russian forces of using cluster munitions. Incendiary weapons use substances that are designed to set fire to objects or burn people, and cluster munitions are containers that explode in the air to distribute smaller bombs over a large area. Both are banned under the convention.

State Department spokesman John Kirby told reporters in Washington that the United States was not in a position to confirm the assertions by the Syrian opposition, but that the claims were taken very seriously. "Regardless of what weapons they're using, (the Russians) shouldn't be striking groups that are committed to the counter-DAESH fight or civilians. Russia and the Assad regime need to be more careful about distinguishing between terrorists, civilians and parties to the cessation of hostilities."

Syria has been locked in a vicious civil war since early 2011, when Bashar Assad's regime cracked down on pro-democracy protests – which erupted as part of the "Arab Spring" uprisings – with unexpected ferocity. Since then, more than a quarter of a million people have been killed and more than 10 million displaced across the war-battered country, according to the U.N.

In September 2015, the Russian military began a campaign of highly criticized air strikes in Syria at the request of the Bashar Assad regime. The indiscriminate airstrikes have leveled mosques, hospitals, bakeries and schools. Rights groups have said hundreds of civilians were killed by Russian airstrikes.

The United Nations now estimates there are five million Syrians in need of humanitarian aid living in hard-to-reach areas, nearly a million more than in April.

Under-Secretary-General for Humanitarian Affairs and Emergency Relief Stephen O'Brien told the U.N. Security Council on Thursday that the increase of 900,000 people over the previous estimate of 4.1 million people in April was mainly due to growing insecurity in a number of areas.

O'Brien said, "This large increase is based on several factors, but is primarily due the inclusion of areas in parts of Aleppo, Raqqa and Hasakah governorates as a result of insecurity, as well as constrained access for humanitarian actors." He also flagged continuing attacks on hospitals and medical facilities in Syria as violations of international law and Security Council resolutions.

O'Brien said that Physicians for Human Rights documented 365 attacks on 259 medical facilities as of late April, with 76 percent of attacks attributed to Syrian government forces, adding that the U.N. has received reports of many more attacks on medical facilities since April. "There is something fundamentally wrong when attacks on hospitals and schools, on mosques and public markets, on ethnic religious and confessional groups have become so commonplace that they cease to incite any reaction."

O'Brien condemned DAESH for genocide and war crimes against Yazidis, saying thousands of Yazidis remain captive, with women being used as sex slaves while male children are indoctrinated and used as child soldiers. He said thousands of Yazidi men and boys are missing.

The U.N. is asking for access to reach over 1.2 million in 35 besieged and hard-to-reach areas in July, O'Brien said, calling the Syrian government to allow the aid, "approved in full and without any conditions."

O'Brien dedicated his remarks Thursday to Jo Cox, the British lawmaker killed last week, who he said had "worked relentlessly, courageously and effectively," for the innocent people of Syria.
Last Update: Jun 25, 2016 11:23 am
RELATED TOPICS