25 children killed in airstrikes in eastern Syria in latest round of Russian, Syrian bombing: UNICEF 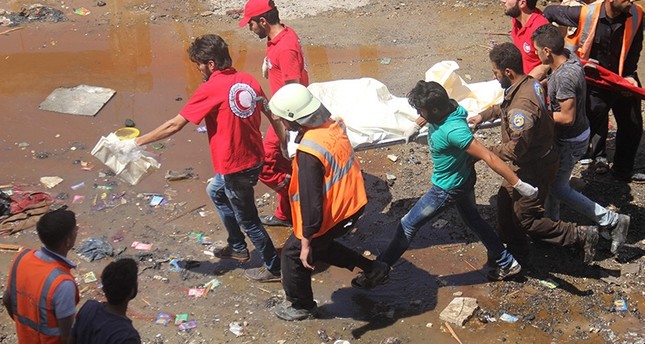 Representative photo: Syrian Red Crescent members carry the body of a victim on a stretcher following air strikes on the northwestern city of Idlib, on June 12, 2016. (AFP)

A day after it was announced that Russian and Syrian regime airstrikes killed 58 civilians in eastern Syria, UNICEF said 25 casualties were children

Twenty-five children were reportedly killed in airstrikes that hit heavily crowded areas in a town in eastern Syria, UNICEF has said.

Quoting reports from its local partners in Syria, UNICEF said health workers were reported to have pulled bodies of children from under rubble in the town of al-Quria in Deir ez-Zor province, which is mostly under DAESH control.

The Syrian Observatory for Human Rights monitoring group reported on Saturday that air strikes carried out by Syrian or Russian warplanes killed dozens of people in al-Quria.

Deir ez-Zor province links DAESH's de facto capital in the Syrian city of Raqqa with territory it controls in Iraq. "Three attacks reportedly hit heavily crowded areas including a mosque during prayer time," UNICEF said in a statement. "UNICEF deplores these attacks and calls on all parties to the conflict to keep children out of harm's way."

On Sunday, a monitor said at least 82 people, including 58 civilians, were killed during airstrikes launched by Russia and Bashar Assad's regime on the DAESH-held area of eastern Syria. "Three Russian and Syrian regime air raids on the region of Al-Quriyah, southeast of Deir ez-Zor city, killed 58 civilians," the Syrian Observatory for Human Rights said.

It added that 24 other people were killed, without specifying whether they were civilians or DAESH extremists.

DAESH holds around 60 percent of Deir e-Zzor, the capital of the province of the same name, which is next to the extremist-held Raqqa province.

Last week, the Syrian opposition High Negotiations Committee (HNC) called on U.N. Secretary-General Ban Ki-moon to launch an investigation into their assertions that Russia has repeatedly used air-delivered incendiary weapons against civilians in Syria. "Russian air forces have repeatedly deployed incendiary weapons and cluster munitions to kill, main and terrorize Syrian civilians, including in at least 10 documented incidents," Riad Hijab, coordinator of the opposition HNC, wrote to Ban. "They have violated the Convention on Certain Conventional Weapons and breached international humanitarian law," he wrote.

Syria has been locked in a vicious civil war since early 2011, when the Assad regime cracked down on pro-democracy protests, which erupted as part of the Arab Spring uprisings, with unexpected ferocity and disproportionate force. Russia first began its air campaign in Syria on Sept. 30 of last year. While Russia claims its campaign is aimed primarily at the DAESH terrorist group, it has repeatedly targeted civilian areas and the moderate anti-regime opposition groups that control them.

Since then, more than a quarter of a million people have been killed, and more than 10 million displaced, throughout the war-battered country, according to the U.N. The Syrian Center for Policy Research, a nongovernmental organization, however, has put the death toll from the five-year conflict at as high as 470,000.

Meanwhile, a human rights group said more than 12,000 people have been tortured to death by the Syrian regime since 2011.

"The Syrian regime is responsible for 99 percent of deaths due to torture at detention centers," the statement added, which was issued to mark the International Day in Support of Victims of Torture.

SNHR Director Fadl Abdel-Ghani said his group could not document any case of detention with a legal warrant. "The regime has committed crimes against humanity," he said, citing sexual assault, killing and involuntary disappearance as some of the practices by the Syrian regime.

Last month, The Syrian Observatory for Human Rights monitoring group said that at least 60,000 people have died in Syrian government jails during the five-year conflict. He said more than 20,000 of them had died at Sednaya prison near Damascus. The observatory said it had been able to verify the deaths of 14,456 people, 110 of them under the age of 18, since the start of the Syrian uprising in 2011.

"We know large numbers of people have died in detention in Syria," said Nadim Houry, deputy director of the Middle East and North Africa division at Human Rights Watch in a telephone interview.

A Syrian defector known as Caesar in 2013 smuggled out tens of thousands of photos taken between May 2011 and August 2013 that show at least 6,786 separate individuals who had died in government custody, HRW said in a report issued in December. That toll was calculated by the Syrian Association for Missing and Conscience Detainees (SAFMCD), which was formed by an opposition body and reviewed all the photos, the HRW report said.

U.N. investigators said in February the reported killings of detainees amounting to a state policy of "extermination" of the civilian population, a crime against humanity.

Share on Facebook Share on Twitter
Previous in Syrian Crisis At least 64 civilians were killed and dozens injured Saturday in Russian... Next in Syrian Crisis Syria's main opposition group said on Monday the European Union should...
DAILY SABAH RECOMMENDS