US, EU behind goals to accept refugees fleeing violence 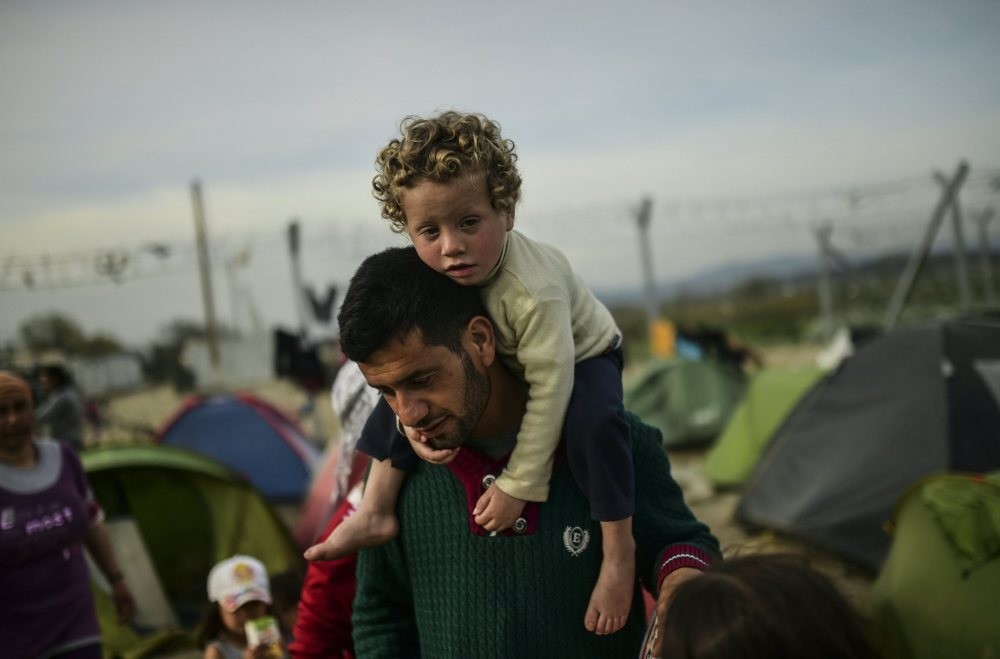 A man carries a child at the makeshift camp along the Greek-Macedonian border near the Greek village of Idomeni, April 1.
by Daily Sabah with Wires Jul 14, 2016 12:00 am

As millions of Syrians have been fleeing violence, rights groups say the refugee burden should be more evenly shared around the world. They say that so far, the U.S. and EU have moved too slowly resettling refugees they had planned to accept

Senior U.N. figures called for the refugee burden to be more evenly shared around the world, as both the United States and EU countries struggle to resettle refugees. "We cannot continue to operate in a world in which eight countries host more than half of the refugees and eight donors give well over 70 or 80 percent of the funding," U.N. High Commissioner for Refugees Filippo Grandi said at a news conference in Berlin, adding: "This has to be spread more evenly because it a phenomenon, it is a problem, it is an issue that is of concern to the entire world." U.S. President Barack Obama had promised to settle 10,000 Syrian refugees this fiscal year. Even though the process has accelerated recently, some activists have criticized Washington for moving too slowly.

So far, the United States has offered refuge to far fewer of the millions fleeing the war in Syria than many of its closest allies.

However, U.S. Secretary of State John Kerry said the United States is now on course to admit 10,000 vulnerable refugees, chosen from U.N. camps and vetted by U.S. security and intelligence agencies. "It's also representing a six-fold increase over what we did the year before," Kerry said, referring to the U.S. fiscal year, which runs from Oct. 1 to Sept. 30. But with less than three months left in the fiscal year, the U.S. has only resettled 5,186 refugees, 58 percent of its overall refugee goal, according to the Huffington Post.

Jen Smyers, a spokeswoman for Church World Service, an international humanitarian organization and one of the agencies resettling refugees in the United States, said meeting the 10,000 target would give Washington the "moral leadership" to ask other nations to do more. Syria is in the grip of what Kerry called the worst humanitarian crisis since World War II, and more than 4.8 million people have fled the country. The United States has been criticized for moving too slowly to respond to the Syrian crisis.

Turkey, which has taken in more than 2.7 million Syrian refugees, currently has the world's largest refugee population. Grandi joined officials from the EU, the World Bank and the International Organization for Migration for a meeting hosted by German Foreign Minister Frank-Walter Steinmeier on the refugee crisis.

Europe has also been reluctant to take refugees amid increasing anti-Islam sentiment. Under the EU-Turkey deal, which was agreed to in March, around 18,000 asylum seekers were expected to arrive in Europe from Turkey, while the EU only received 798 asylum seekers. According to the German Rheinische Post, Germany has taken 294 of them. According to the deal, for every Syrian returned, the EU would accept one Syrian refugee, for a target figure of 72,000 people to be distributed among European states.

Meanwhile, the EU also has a separate plan to relocate 160,000 migrants that have already arrived, though only a handful have been moved so far. Peter Sutherland, the U.N. special envoy for international migration, criticized EU states over their reluctance to accept more refugees. "The Pope coming back from Istanbul brought more on his plane than 21 countries of the EU have taken from Syria," he said about Pope Francis's trip to the region in April. "This is a disgrace." He added: "Governments in the EU are playing up the nationalist card, feeding the populism of those who do not believe in the fundamental values that we have."

EU migration chief Dimitris Avramopoulos said the events triggered by the refugee crisis had become a more serious threat to the EU than the economic and financial crisis. "Some years ago in Europe some believed that it would be the economic crisis that would put the European project at stake," he told journalists. "But it is not the case. It is exactly the refugee and migration crisis. What is threatening Europe right now is the rising of populism, nationalism and xenophobia." He pointed to developing a policy to pave the way for legal migration as the way to resolve the crisis. "Europe will be in need of migrants in the future," he said. "According to our studies, 10 years from now, Europe will need approximately 10 million workers and migrants. We need skilled workers."
RELATED TOPICS