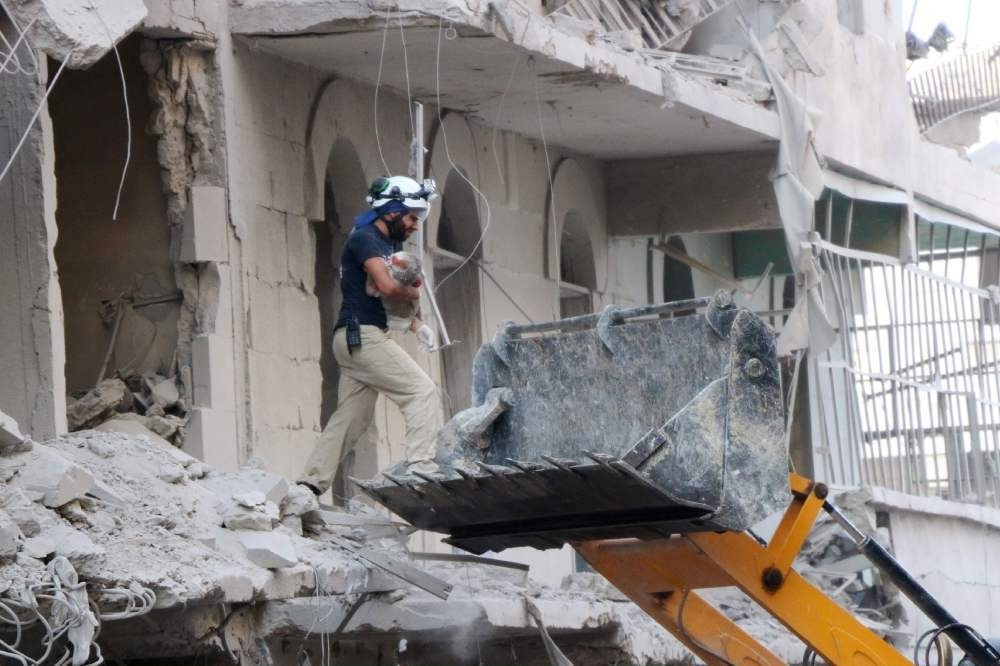 A Syrian rescue worker removes the body of an infant from the rubble of a damaged building following reported Assad regime air strikes on July 7.
by Daily Sabah Jul 15, 2016 12:00 am

Even though Ankara has warmed ties with Israel and Russia to enter into a new era, Prime Minister Yıldırım reiterated that Ankara will have no intention to reconcile with Syria until Assad leaves

Something must be changed in Syria to make things right again, but Bashar Assad must go before that something, Prime Minister Binali Yıldırım said in an exclusive interview on Thursday.

Speaking on a BBC program, Yıldırım said that the priority must be Assad's removal. "Nothing will change in Turkey's [policy] so long as Assad is not replaced. The main factor why things are this way [today] is Assad," he said.

When asked about whether there has been a change in Ankara's Syria policy, Yıldırım said that Assad and DAESH are the main problems in Syria and cannot be favored by Ankara. "We cannot choose either of them. Both must leave. The problem will not be solved as long as Assad is there, otherwise another terrorist group will come to the fore," he asserted.

Yıldırım contended that the Syrian regime's actions helped the formation of DAESH.

Rebuffing allegations that Turkey sympathizes with terrorist organizations, Yıldırım asserted that Turkey has never been and will never be one. "There is no other country that knows better than Turkey that terror is a fatal thing," he added.

Explaining that Ankara only supports groups in Syria that fight for the freedom of the people, Yıldırım said: "Turkey will never support other groups, neither DAESH nor the PYD [Democratic Union Party] nor Assad's forces."

Yıldırım said on Wednesday that their aim is to nurture friendships with neighboring countries. ''We will expand the circle of friendship. We have already started doing it. We have normalized our ties with Israel and Russia. Now I'm sure we will normalize ties with Syria," he said. "Hopefully, our relations with Syria will normalize over time. It is vital that we improve our relations with our neighbors. We went through thick and thin. The future lies in brotherhood and unity.""We need this [because] in order for counterterrorism efforts to succeed, there has to be stability in Syria and Iraq and [they] need to adopt a system of government that represents all our brothers and sisters [in Syria and Iraq]. This is inevitable," he said.

Speaking to Daily Sabah, officials stressed that there will be no changes to Turkey's relations with Syria unless the Assad leaves.

Officials said that Turkey is currently undergoing an expansion process in terms of its diplomatic relations with neighbors, which is indicated by recent developments with Russia and Israel. They said that Ankara will further develop relations with Iraq and may open diplomatic channels with Egypt, but there will not be any changes to its policy in Syria, saying that the only way to normalize relations with Syria would be Assad's departure from power.

At the beginning of his era as the AK Party Chairman and Prime Minister, Yıldırım signaled changes to the government's former foreign policy and said he would like to "decrease the number of our [Turkey's] enemies and increase the number of allies."

Yıldırım vowed that, as prime minister, he would enhance Turkey's cooperation with its allies, noting that "Turkey has a lot of issues, including regional ones. The conflicts and issues related to the European Union, Cyprus, and the Caucasus increase Turkey's significance on the international stage; especially due to its geographical position in the region. We are aware of this. What we will do is simple: we will increase our number of allies, and decrease the number of our foes. As we have throughout history, Turkey is a country that stands by the oppressed and history has left us very important responsibilities in the region."
RELATED TOPICS