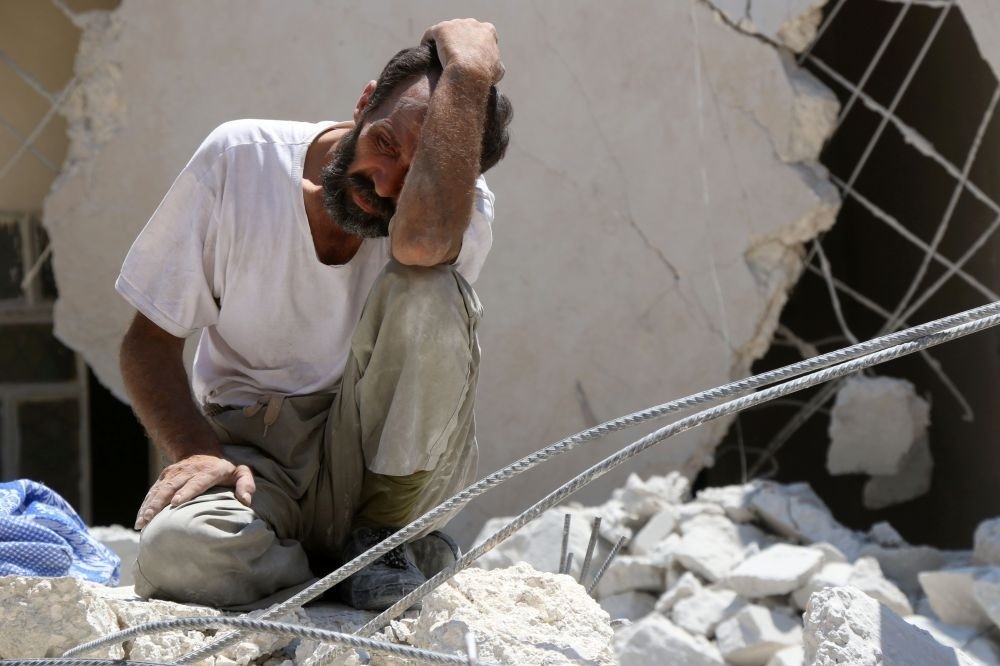 A man looks on as Syrian civil defense workers look for survivors under the rubble of a collapsed building following reported airstrikes on July 17 in the opposition-controlled neighborhood of Karm Homad in the northern city of Aleppo.
by Daily Sabah with AFP Jul 20, 2016 12:00 am

Civilians in rebel-held parts of Syria's Aleppo expressed fears Monday of a lengthy government siege, as food supplies dwindled after regime troops seized the only road into the city's east.

The government advance, which has been backed by a Russian air offensive, is seen as a major setback for opposition forces in Syria's second city.

The United Nations says about 600,000 Syrians already live under siege countrywide, most encircled by government forces.

A US-backed alliance of Kurds and Arabs has also surrounded the DAESH stronghold of Manbij about 100 kilometers (60 miles) northeast of Aleppo city.

Air strikes by the US-led coalition killed at least 21 civilians in and around the extremist bastion on Monday, said the Syrian Observatory for Human Rights.

In Aleppo city itself, air strikes struck opposition areas, killing four civilians in Qaterji, the monitor said. In Bab al-Hadid, another district that was hit, an AFP correspondent saw a man searching for his family under the rubble. He called out to his daughter, who replied: "I'm in the basement. There's no air," before she fell silent, and he burst into tears.

Bombs then dropped nearby causing more casualties, including a woman who lost a leg, said the correspondent, who noted attacks on eastern Aleppo had intensified in recent days.

Food and fuel shortages had already hit opposition-held districts that are home to at least 200,000 people, after government forces advanced to within firing range of the key Castello Road supply route on July 7.

Regime forces seized the road itself at the weekend, completely severing the opposition-held portion of the city from the outside world and raising fears of a potentially devastating siege. "I don't know what is going to happen to us," said 38-year-old Mohamed Rukby, an unemployed father-of-four in the Bustan al-Qasr neighborhood.

"We have nowhere to go. All the roads are closed and we've been suffering for days with shortages of bread, food and basically everything."

In the opposition-controlled Al-Mashhad district, mechanic Mohamed Zeitun said his work had dried up because fuel shortages meant residents were not driving anywhere. "The idea of the siege keeps me up at night," the 44-year-old told AFP. "I don't have supplies to last me more than a week, and if there is no food in the markets, there could be a famine," said the father-of-five. Aleppo city was once Syria's economic powerhouse, but it has been ravaged by the war that began in March 2011 with anti-government protests.

The conflict has killed more than 280,000 people and left Aleppo divided roughly between government control in the west and rebel control in the east.

The encircling of eastern Aleppo has raised international concern, with the U.N.'s humanitarian coordination body OCHA warning that "the situation is particularly worrying due to the high concentration of people living in this area". It said eastern Aleppo had not received humanitarian supplies since July 7, and that there was enough food there to last 145,000 people for one month.

OCHA said some essentials had been stockpiled and there were sufficient emergency medical supplies for four to five months. But "further life-saving aid is needed urgently", it added.

In some places, civilians have reportedly starved to death or died for lack of medical supplies because of siege tactics.

Despite successive rounds of talks, international efforts to find a solution to the conflict have yet to bear fruit, and U.N. Syria envoy Staffan de Mistura has urged Russia and the United States to push for renewed peace talks in Geneva next month. But the opposition High Negotiations Committee said the regime's advance around Aleppo could jeopardize new talks.

"This is pushing the negotiations in Geneva to a more remote date. Frankly the prospects are becoming less and less possible or more and more remote," HNC member Basma Kodmani said late Sunday.

Syria's civil war, which started in 2011 after al-Assad's forces launched a brutal crackdown against protests, has cost more than a quarter of a million lives and displaced half the country's population, according to U.N. estimates.
RELATED TOPICS