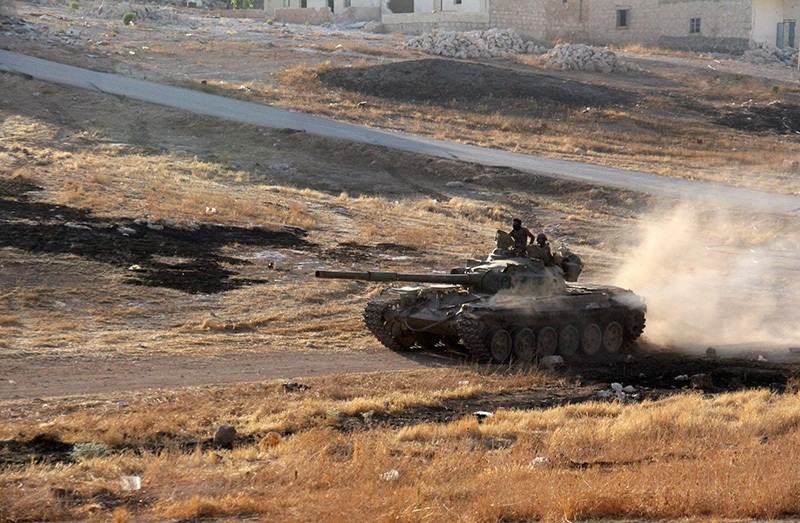 Opposition fighters drive a tank in the Al-Huweiz area on southern outskirts of Aleppo as they battle to break the government siege on the northern Syrian city on August 2, 2016. (AFP Photo)
by Compiled from Wire Services Aug 03, 2016 12:00 am

The Syrian regime army backed by Russian fighter jets pounded opposition positions in the city of Aleppo on late Tuesday in a bid to crush a major insurgent campaign to break the siege of opposition-held parts the city, rebels said.

The Observatory said 50 rebels and allies had been killed since the assault began, as well as dozens of regime troops.

Syrian regime forces backed by heavy Russian air raids recaptured a series of hilltops and villages on the southwest edges of Aleppo city from rebel groups, a monitor said Wednesday.

The advance rolls back the short-lived gains from a rebel offensive launched on Sunday to ease the regime's siege of eastern opposition-held districts of the divided city.

The Al-Watan daily, which is close to the government, reported on Wednesday that government forces "advanced again south and southwest of Aleppo because of the major setbacks" among rebel factions.

Overnight, at least 10 civilians including four children were killed in rebel shelling of government-controlled districts on Aleppo's southwestern edges, the Observatory said.

More than 40 civilians have been killed in opposition bombardment of those neighborhoods since Sunday.

Rebel groups launched the wide-scale assault on Sunday to break through a strip of regime-controlled territory and reconnect their encircled sector of eastern Aleppo with a swathe of insurgent territory in the west of Syria.

This would open a new route south of the city for a quarter of a million civilians in eastern Aleppo who are under siege by the army and its Iranian-backed allies, who tightened their grip last week on a road on the northern edge of the city that was the only route into rebel districts.

Rebels mainly from Jaish al Fatah alliance pushed from the south of the city while fighters from Free Syrian Army (FSA) brigades pounded regime-held areas of Syria's most populous city and commercial hub before the war broke out in 2011.

The heaviest fighting on Tuesday centered around the strategic al-Ramouseh area southwest of Aleppo. Video released by the Mujahideen Army brigade showed fires raging at a military academy near the country's largest artillery base.

"We are now overlooking the al-Ramouseh area but Russian jets are intensifying their bombing, which is holding us back from moving quickly," said Abu Rakan, military commander from Failaq al Sham brigade.

Rebels said jets believed to be Syrian and Russian bombed their areas southwest of Aleppo.

A rebel source in Jaish al Fatah said they had deployed around 10,000 troops, at least 95 tanks and several hundred rocket launcher vehicles in a three-stage battle they gave the name of the "great epic battle of Aleppo".

They had also prepared scores of suicide bombers to drive explosive-laden military vehicles into army posts.

The Syrian army said insurgent rockets killed at least nine people, mainly women and children, in Hamadaniyah and al-Ramouseh districts in the last day. At least five civilians were killed when rebels fired toxic gas on the old quarter, it added.

Meanwhile, rebels accused government forces of launching toxic gas attacks on civilians in a town southwest of Aleppo on Tuesday. The government rejected the claim and accused the rebels of using chemical weapons themselves.

Rebel sources provided video of people receiving treatment who they say were among the victims of a gas attack, but the images were not conclusive and neither of the gas attack claims by the rebels or the government could be independently verified.

The accusations on both sides came amid heightened fighting around the contested northern city that killed at least 20 people, activists and government media reported.

Rescuers and doctors in rebel-held Saraqib, a town in the northwestern Idlib province, about 40 kilometers (25 miles) southwest of Aleppo, reported dozens of cases of severe breathing difficulties, saying the symptoms pointed to a chlorine gas attack.

A neurologist, Dr. Ibrahim al-Assad, said he treated 16 of the 29 cases brought to his hospital on Monday night, most of whom were women and children. One elderly man needed critical care but most of the casualties were suffering from breathing difficulties, red eyes and wheezing, al-Assad said.

He said first responders smelled the gas at the site of the bomb attack, which he described as a busy shopping area near an ice cream shop. Rebels and activists have reported chlorine gas attacks in the town before, but the lack of chemical labs or independent testers makes it difficult to verify these claims. The government denies that is has launched chlorine gas attacks.

Syrian state media later reported that five people had died and eight others had experienced breathing difficulties after artillery shells laced with toxic gases landed on the old city of Aleppo. It said the shells were launched by rebels.