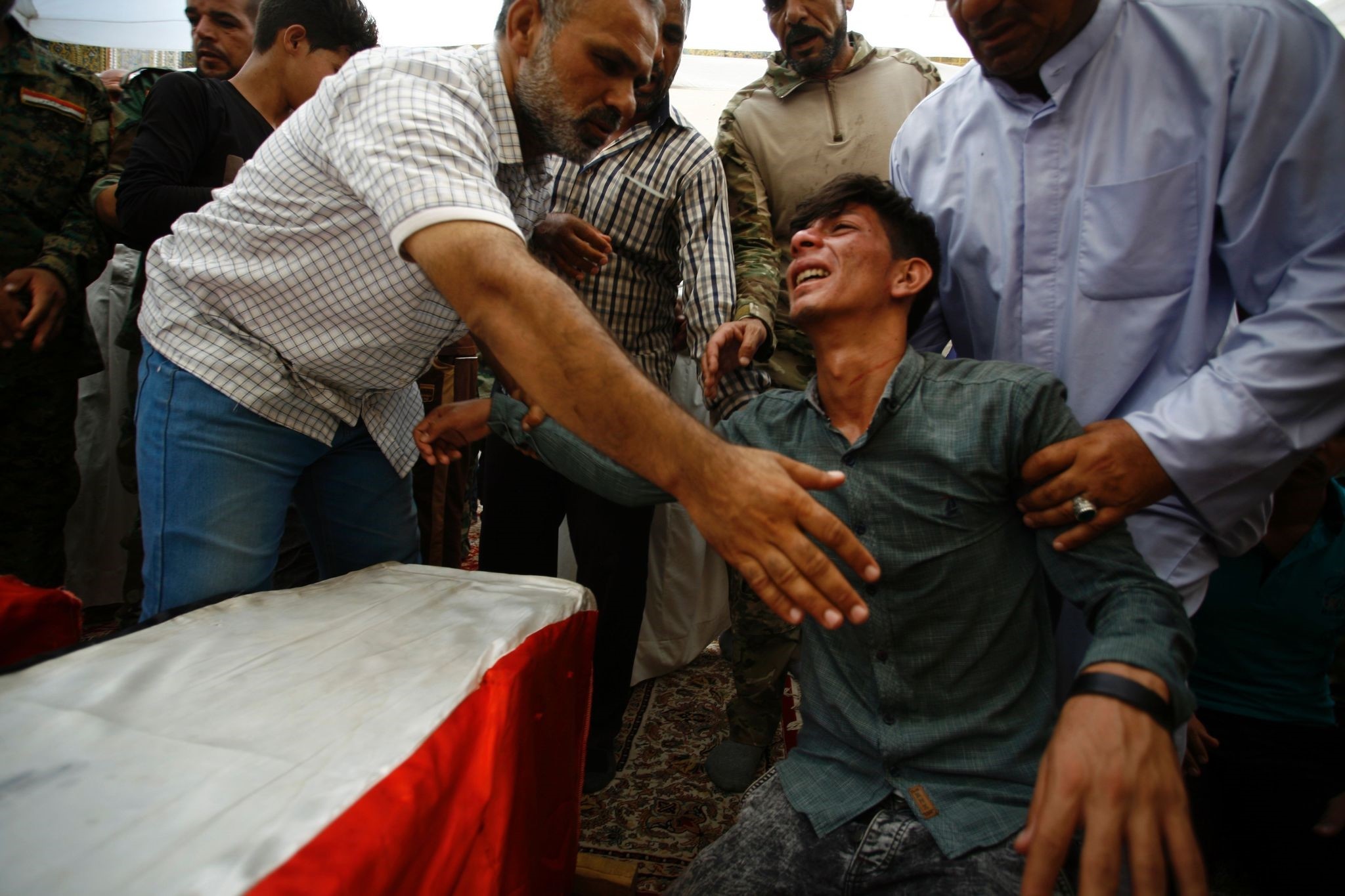 Iraqis mourn over the coffins of Shiite students who were killed in the Khalidiyah area of Iraq's Anbar province fighting alongside pro-gov't forces in the battle against Daesh. (AFP Photo)
by reuters Aug 05, 2016 12:00 am

Daesh fighters may have captured up to 3,000 fleeing Iraqi villagers on Thursday and subsequently executed 12 of them, the U.N. refugee agency UNHCR said in a daily report on events in Iraq.

The report followed a statement on Thursday from the Iraqi Observatory for Human rights, which said about 1,900 civilians had been captured by an estimated 100-120 Daesh fighters, who were using people as shields against attacks by Iraqi Security Forces. Tens of civilians had been executed, and six burnt.

"UNHCR has received reports that ISIL captured on 4 August up to 3,000 IDPs (internally displaced people) from villages in Hawiga District in Kirkuk Governorate trying to flee to Kirkuk city. Reportedly, 12 of the IDPs have been killed in captivity," the UNHCR report said, using a different acronym for Daesh.

The United States is leading a military coalition conducting air strikes against Daesh in Iraq and Syria, where the group seized broad swathes of territory in 2014. The fighting had displaced 3.4 million people in Iraq by July 2016.

Daesh's grip on some towns has been broken, but it still controls its de facto capitals of Mosul in Iraq and Raqqa in Syria.

Last month the U.N. appealed for $284 million to prepare aid for an assault on Mosul, as well as up to $1.8 billion to deal with the aftermath.

It has so far received nothing in response, according to the U.N. Financial Tracking Service.

UNHCR has begun building a site northeast of Mosul for 6,000 people and is preparing another northwest of the city for 15,000, a fraction of those expected to need shelter.

Tens of thousands who fled from the city of Falluja have still not returned since its recapture from Daesh in June. Three volunteers helping to clear Falluja of rubble and explosives died while clearing a house on Aug 1, UNHCR said.

"Although local authorities have suggested that returns to Falluja could begin in September, the Ministry of Migration and Displacement has stated that it may take another three months before conditions are conducive for large scale returns," it said.

But Iraqi authorities reported 300,000 displaced people had returned to Ramadi district, UNHCR said. Iraqi forces declared victory over the extremist group in Ramadi, the capital of Anbar province, in December, but later called a halt to returns after dozens of civilians were killed by mines.