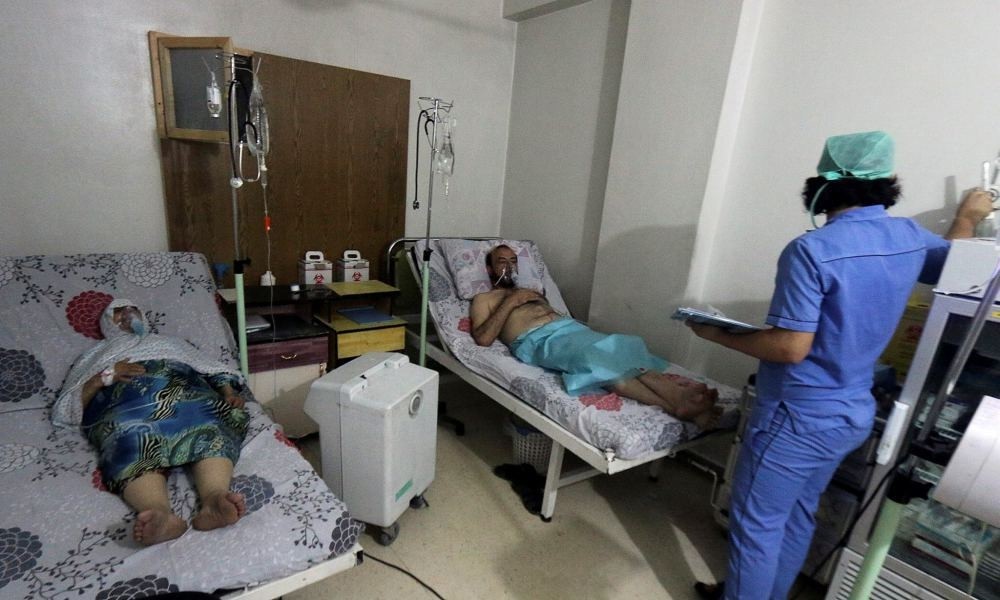 Civilians breathe through oxygen masks at al-Quds Hospital, after a hospital and a civil defence group said a gas, what they believed to be chlorine, was dropped alongside barrel bombs in Aleppo.
by Compiled from Wire Services Aug 12, 2016 12:00 am

A Syrian government airstrike on an opposition-held district in the embattled city of Aleppo killed at least two people in what was alleged to have been a chlorine gas attack, a Syrian rescue worker and opposition activists said Thursday. The attack late Wednesday on the city's eastern Zabadieh neighborhood saw at least four barrel bombs dropped on the area, one of which purportedly released the chlorine gas. A father recounted dramatic moments of gasping for breath and cowering with his family on the top floors of their apartment building as a choking gas filled the hallway. It came hours after the Russian military, which is fighting alongside Syrian government forces in the civil war, promised a daily, three-hour cease-fire for Aleppo to allow humanitarian aid in to besieged areas. Lt. Gen. Sergei Rudskoi of the Russian military's General Staff said the cease-fires will be observed from 10 a.m. to 1 p.m. local time starting Thursday, in order to facilitate the distribution of aid.

The Organization for the Prohibition of Chemical Weapons (OPCW) said Thursday that reports of possible chemical weapons use in Syria "are of great concern." The Netherlands-based agency said in a statement that the use of chemical weapons by anyone under any circumstances is "reprehensible," adding it continues to examine any credible reports it received. Khaled Harah, a first responder in the opposition-held part of Aleppo, said a government helicopter dropped four barrel bombs on the neighborhood of Zabadieh and that one of them released chlorine gas, leading to the deaths of a mother and her two children. The report, which was posted online on Thursday, could not be independently verified and it was not clear how it was determined that chlorine gas was released. The Britain-based Syrian Observatory for Human Rights, an activist group that tracks the civil war in Syria, also reported that government barrel bombs struck the neighborhood. It had reports of two killed and several people suffering breathing difficulties. The Observatory made no mention of chlorine gas.

Abdelkafi al-Hamdu, a resident of Aleppo, said he saw two air strikes from his in-law's balcony, about 30 meters away. He said the first blast released a gas he identified by the smell as chlorine, but the wind was blowing in the other direction, lessening the odor. He took cover in the apartment but began experiencing severe difficulties breathing, so he took his wife and daughter with him and tried to leave the building. But the odor grew stronger as they descended the stairs, so they returned to the higher floors to wait out the effects. He spoke to the AP via a messaging service. Accusations involving use of chlorine and other poisonous gases are not uncommon in Syria's civil war, and both sides have denied using them while blaming the other for using it as a weapon of war. Last week, the Syrian government and the opposition traded accusations of using chlorine, also in Aleppo. Chlorine gas is a crude weapon, fatal in high concentrations while in lower doses, it can damage lungs or cause severe breathing difficulties and other symptoms such as vomiting and nausea.

Fighting persisted in Aleppo on Thursday more than an hour into a three-hour ceasefire announced by Russia, two opposition groups and a witness in the city said, as government forces tried to reverse last week's opposition gains. Russia said on Wednesday daily ceasefires would last from 10 a.m. until 1 p.m. daily to facilitate the delivery of aid supplies. Mohammed Rasheed, spokesman for Jaish al-Nasr group, said "Today since the morning there has been a (government) attempt to advance in the Ramousah area. There has been a big escalation by Russian warplanes." Syrian state television reported on Thursday that the army had advanced on Wednesday night under cover of air strikes to positions near the areas that opposition groups captured last week.

Meanwhile, Russian air strikes on DAESH's bastion, Raqqa on Thursday killed at least 30 people, including 24 civilians, a monitoring group said. The Syrian Observatory for Human Rights said they were killed and dozens of people wounded when 10 Russian raids hit the city and its outskirts. The monitor said it had not yet confirmed how many of the remaining six people killed were civilians or DAESH militants.
RELATED TOPICS