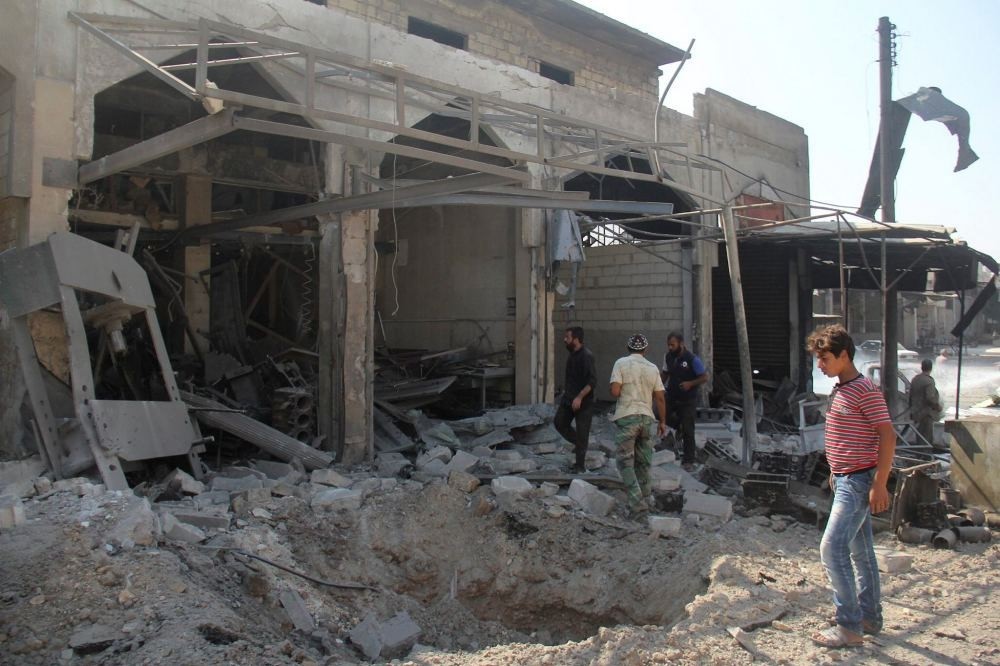 People inspect a damaged building in Idlib after warplanes pounded the city yesterday.
by Compiled from Wire Services Aug 15, 2016 12:00 am

Syrian warplanes bombed opposition-held Idlib province, killing at least 22 people. Clashes in Aleppo have also intensified and bombs dropped by the regime killed at least 49 people over the weekend

Syria's opposition-held, northwestern Idlib province came under heavy bombardment Sunday, activists reported, as opposition fighters and pro-government forces battled for control of the nearby city of Aleppo. The Britain-based Syrian Observatory for Human Rights reported 26 airstrikes across the province, one of the last remaining bastions of opposition control. 22 people were killed during the airstrikes. Opposition groups in Idlib, home to a pre-war population of 1.5 million, are mounting an offensive to seize contested Aleppo. Tens of thousands of Syrians displaced from Aleppo province have found refuge in Idlib. The Local Coordination Committees, an activist network, said Russian jets struck the towns of Jisr al-Shaghour and Binnish, while the Observatory reported strikes on the provincial capital, Idlib. It was unclear how the activists identified the planes.

Moscow has been waging an air campaign in support of government forces for nearly a year. Russia's military said six long-range Tu-22M3 bombers that took off from Russian territory carried out strikes Sunday on DAESH near the eastern Syrian city of Deir el-Zour. The strikes killed a large number of militants while destroying two command posts, six arms caches, two tanks, four armored infantry vehicles and seven all-terrain vehicles with heavy machine guns, the Defense Ministry statement said. The ministry made no mention of any strikes in Idlib.

Elsewhere in Syria, opposition groups and government forces battled around a major power plant in the central Hama province. State media reported that opposition fighters inflicted heavy damage to the Zaara generating station, while an opposition media activist in the nearby town of Aqrab said the power plant was not targeted. Obeida al-Hamawi, of the activist-run Hama Media Center, said government forces had launched an assault from positions near the plant to retake the village of Zaara, captured by opposition groups earlier this year. He said electricity was still being supplied to the area. The Observatory reported heavy clashes in the area.

Clashes and airstrikes meanwhile continued across the northern Aleppo province, resulting in at least 49 civilian deaths on Saturday alone, activists and state media reported. Five children were among the dead. The Observatory said government airstrikes and shelling on opposition areas in Aleppo city and the surrounding countryside killed 40 civilians Saturday, while the Local Coordination Committees put the toll in opposition areas at 45 dead. State media and the Observatory said opposition shelling on government-held districts of Aleppo city killed nine civilians, including two children. State media said another 22 people were wounded. Fighting for the city has intensified this summer, after regime troops seized control of the last supply route into opposition-held areas in mid-July. After a nearly three-week siege, opposition forces took Ramussa on August 6, linking up with opposition-held neighborhoods.
RELATED TOPICS