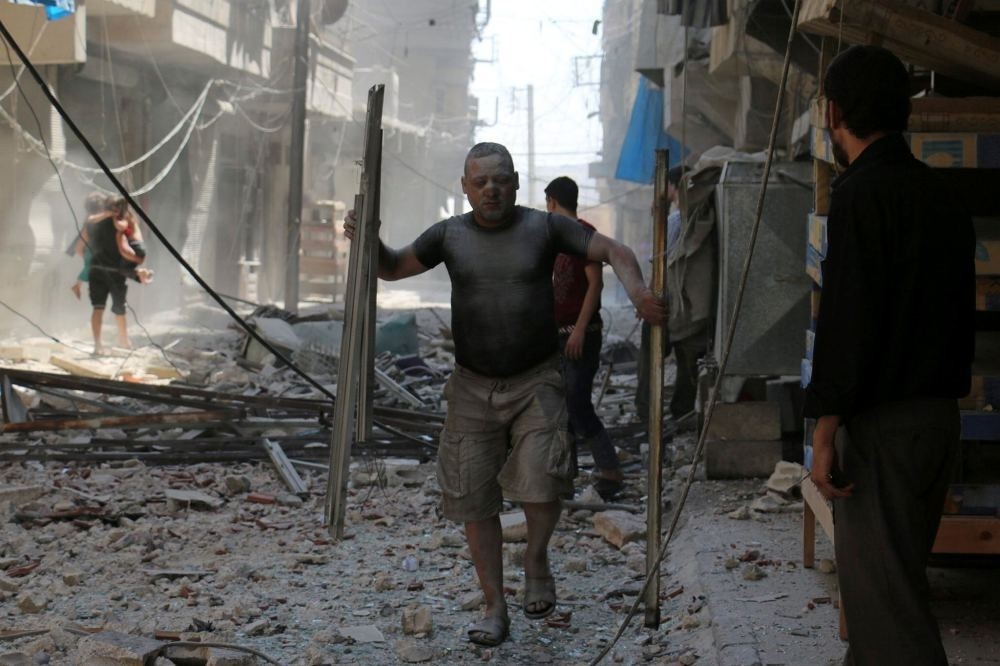 A Syrian man covered with dust carries pieces of metal on a street cluttered with rubble following an airstrike on the rebel-held neighborhood of Sakhur in Aleppo.
by Daily Sabah with Wires Aug 16, 2016 12:00 am

DAESH said that it killed at least 50 opposition fighters in a suicide bombing on a bus near the Atmeh border crossing with Turkey. The opposition faces the DAESH threat while fighting intensively against the Syrian regime in Idlib and Aleppo

DAESH said on Monday they were responsible for a suicide bombing on a bus on Sunday which killed fighters from western-backed Syrian opposition groups near the Atmeh border crossing with Turkey. In a statement on one of its Telegram channels, the hard-line militant group said it killed 50 fighters travelling on the bus, from the Failaq al-sham and the al-Zinki groups. It said the fighters were travelling to fight against DAESH in northern Aleppo province.

The Britain-based Syrian Observatory for Human Rights said a suicide bomber struck a bus transporting fighters through the Atmeh border post, one of several crossings Syrian opposition uses to bring in fighters and supplies. The monitoring group, which relies on activists inside Syria, said the attack killed 50 fighters. An activist, who spoke on condition of anonymity for fear of retribution, said some 200 fighters from various factions are based near Atmeh and bring in weapons through the crossing. The Observatory had earlier reported 26 airstrikes on Sunday across Idlib, one of the last remaining opposition bastions. Observatory head Rami Abdurrahman said Russian and government airstrikes on the province have intensified since opposition fighters launched a campaign from Idlib to break a government siege of Aleppo's opposition districts on July 31. The strikes have killed 122 civilians, he said. Another 327 civilians, including 126 children, have been killed in fighting in Aleppo province, according to the Observatory. The toll includes 126 people killed by opposition shelling of government-held parts of Aleppo city. The Local Coordination Committees, an activist network, said Russian jets struck the towns of Jisr al-Shaghour and Binnish, while the Observatory reported strikes on the provincial capital, Idlib. It was unclear how the activists identified the planes.

Aleppo is still home to some 2 million people, most of whom live in the government-controlled western districts. Syrian government forces on Monday repelled a renewed opposition assault southwest of the city of Aleppo, forcing opposition forces to retreat from positions they seized a daily earlier, the Syrian government and activists said. The development followed intense battles between the two sides. Tens of thousands of Syrians displaced from Aleppo have found refuge in Idlib, home to a pre-war population of 1.5 million. On Sunday evening, opposition fighters opened a new front, sending a truck bomb into Aleppo's western Zahraa neighborhood, according to the Twitter account of the Islamic Front, one of the factions fighting for the city. The Observatory reported fighting in the city's western and southern districts.

Moscow has been waging an air campaign in support of government forces for nearly a year. Russia's military said six long-range Tu-22M3 bombers that took off from Russian territory carried out strikes Sunday on DAESH near the eastern Syrian city of Deir el-Zour. It made no mention of any strikes in Idlib. Russian Foreign Minister Sergei Lavrov said on Monday that Syrian opposition groups had used temporary ceasefires in and around Aleppo to regroup and rearm. Lavrov, speaking at a news conference in the Russian city of Yekaterinburg with his German counterpart Frank-Walter Steinmeier, said he realized that brief daily ceasefires in place now to allow aid to enter and civilians to leave were not sufficient. But he said it was difficult to make the ceasefires longer for the moment because of the risk of militants using them to regroup and rearm, something he said they had done in the past. German government spokesman Steffen Seibert said the hardships faced by people in Aleppo could not be alleviated by announcing three-hour ceasefires. "It's supposed to sound like a concession but it's actually cynicism, because everybody knows that this amount of time is nowhere near sufficient to actually build up supplies for the desperate people there," he told a government news conference. He said the killing in Aleppo had to stop and the city needed to receive food and medical items without hindrance. Seibert said Syria's Bashar Assad and Russia, an ally of Assad against opposition in Syria's five-year-old civil war, were largely responsible for the situation in the city: "It's primarily their decision whether there will be further deaths or whether the people there get help and hope after months of suffering."
RELATED TOPICS