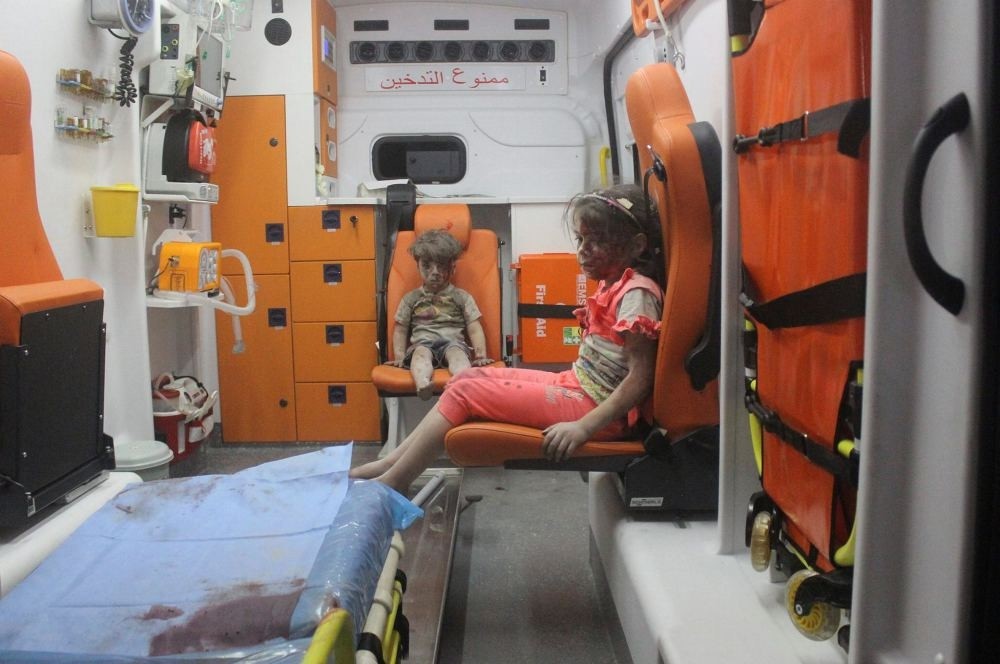 Five-year-old Omran Daqneesh with a bloodied face with his sister in an ambulance. (Reutters Photo)
by Compiled from Wire Services Aug 20, 2016 12:00 am

The image of a 5-year-old boy, taken out of debris after an apparent airstrike in Aleppo has increased awareness in the traumatic war in Syria. Russia has proposed a cease-fire for the delivery of humanitarian aid while thousands of other children have been deeply affected by the war

Haggard and covered in blood, little Omran's blank stare shook the world. But across war-torn Syria, thousands of children like him are traumatized by daily life under bombs and siege. The footage of the shell-shocked 4-year-old made headlines around the world and was dubbed by Washington "the real face" of Syria's five-year war. "Omran's case isn't rare, we treat dozens of cases like him every day, with wounds that are typically worse," Dr Abu al-Baraa, a pediatrician in a opposition-held eastern neighborhood of Aleppo, told AFP. The footage from activists at the Aleppo Media Centre shows Omran sitting quietly in an ambulance, his bare, dust-covered feet barely reaching the edge of the orange chair. He touches his forehead with his tiny hand and seems surprised to see blood on his fingers, then wipes it off on the orange chair with the timidity of a child who feels he has done something wrong. "There are thousands of stories of wounded children whose limbs have been blown off, with wounds to the stomach and head," said Dr Abu al-Baraa.

A bombing raid on the opposition-held district of Salhin in Aleppo killed seven people on Thursday and wounded many more, he added. "One child was wounded in the chest and head. We tried to stop the bleeding and give him a transfusion, but he was in critical condition and he died." "He was almost six years old. These are the cases we see every day."

Despite the international outcry, Dr Abu al-Baraa said nothing would change. "The world can see videos of children every day on YouTube, the children dying in the raids, stuck under the rubble. But the world isn't focusing on this. These are just empty words." Omran's haunting photo has sparked a series of caricatures and edited images. In one photo, Omran sits unassumingly between U.S. President Barack Obama and his Russian counterpart Vladimir Putin, deep in discussion. In another, the toddler occupies the seat held by Syria at the Arab League, as if to criticize international inaction on the crisis. And Sudanese artist Khaled Albaih drew Omran near Aylan Kurdi, the three-year-old whose tiny body washed up on a Turkish beach in September after a desperate attempt by his family to reach Europe by boat. "Choices for Syrian children," reads the bold text over the picture. Omran's blank stare is captioned with "if you stay," and Aylan's crumpled body with "if you leave".

Once Syria's economic hub, Aleppo has been divided by government control in the west and opposition fighters in the east since 2012. Regime warplanes, backed by Russia's air force since September 2015, bombard the eastern districts while opposition groups fire rockets into the west.

Of the estimated 250,000 people still living in the eastern parts of the city, 100,000 are children, said Juliette Touma, from the U.N. children agency (UNICEF). Omran's photograph "is a reminder of how horrific the war in Syria is and how brutal the impact on children is," she told AFP. "This photo should shake the conscience of the world." More than 290,000 people have been killed since Syria's conflict broke out, including nearly 15,000 children. At least 2.8 million Syrian children, some in their home country, others living as refugees in neighboring countries, are without school. Across Syria at least six million children are in urgent need of humanitarian assistance, Touma said, adding that children make up half of the 600,000 people living under siege in the country. "There are millions of kids who are in a state of shock as a result of violence because of the horrors they witness," she added. According to UNICEF, a third of Syrian children have only known war, born after the conflict erupted in March 2011. That means millions of children "have grown up too fast and way ahead of their time," the agency said.

The Russian military said Thursday it was ready to back a U.N. call for weekly cease-fires for Syria's contested city of Aleppo, as haunting footage of the young boy's rescue from the aftermath of an airstrike shook global media. Later Thursday, Russian Defense Ministry spokesman, Maj.-Gen. Igor Konashenkov said Russia would back the initiative on condition the aid convoys travel to both opposition-controlled and government-held parts of the city. He said Russia was ready to support deliveries starting next week. In Washington, State Department spokesman John Kirby said that while the U.S. would welcome any "genuine effort to stop the bombing, even if it is just for 48 hours, that's not the long term answer."

Meanwhile, two Syrian girls, one of them an eight-month-old baby, are among up to six people who died when a boat carrying would-be migrants to Europe capsized off Libya Thursday, rescuers said. Five bodies were recovered and one passenger was missing, presumed drowned, following the capsize on Thursday. Some of the 21 survivors told aid workers there had been 27 people from eight Syrian families on the boat. The Phoenix, a rescue boat run by the Malta-based NGO Migrant Offshore Aid Station (MOAS) and the Italian Red Cross (CRI), recovered the corpses of two women, one man and the baby while the five-year-old's body was picked up by a fishing boat, the organizations said. MOAS co-founder Regina Catrambone said "It is very sad and frustrating to witness the tragic loss of life at sea, especially that of such a young child."
RELATED TOPICS