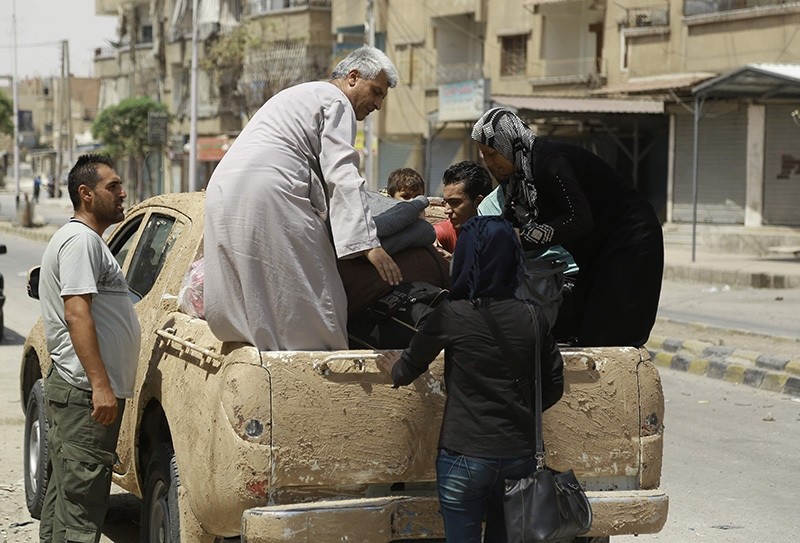 Syrian civilians prepare to flee the northeastern city of Hasakeh during ongoing fighting between YPG and Syrian regime forces on August 22, 2016. (AFP Photo)
by French Press Agency - AFP Aug 23, 2016 12:00 am

Regime forces and PKK-linked PYD's armed wing YPG's militants agreed on Tuesday to a truce in the northeastern Syrian city of Hasakeh after a week of clashes, a PYD official and Syrian state media said.

A statement distributed to journalists by an YPG official said the agreement included "a ceasefire and the withdrawal of all armed forces from the city."

It said the PYD and regime would also exchange any detainees or wounded, and reopen roads blocked off during fighting.

The official told AFP that the People's Protection Units (YPG), the Syrian offshoot of PKK terror organization, and regime forces would withdraw from Hasakeh, while the police forces of both the PYD and the government would remain.

He added that the deal was brokered "under the auspices of Russian military officials."

A local journalist working with AFP said the city was quiet on Tuesday afternoon, with several stores reopening in the city center.

On Monday, Kurdish, regime, and Russian officials met in the coastal Khmeimim air base to hash out an agreement to put an end to the outbreak of violence in Hasakeh.

Clashes erupted on Wednesday between the PYD's police force known as the Asayish and the pro-government National Defense Forces militia (NDF).

Fighting escalated Thursday when regime warplanes bombarded YPG-held positions in the city for the first time.

That prompted Washington to warn against strikes that might endanger its military advisers with the Kurds on the ground.

Hasakeh, capital of the northeastern province of the same name, was already mostly controlled by Kurdish forces although the majority of its residents are Arabs.

Kurdish fighters now control 90 percent of the city after seizing the central prison, the Syrian Observatory for Human Rights said on Monday.

PYD has run autonomous institutions across swathes of the country's north -- with independent schools and police forces -- since regime forces withdrew from the area in 2012.