Turkey ready to provide support of all kinds for the Jarablus operation, FM Çavuşoğlu says 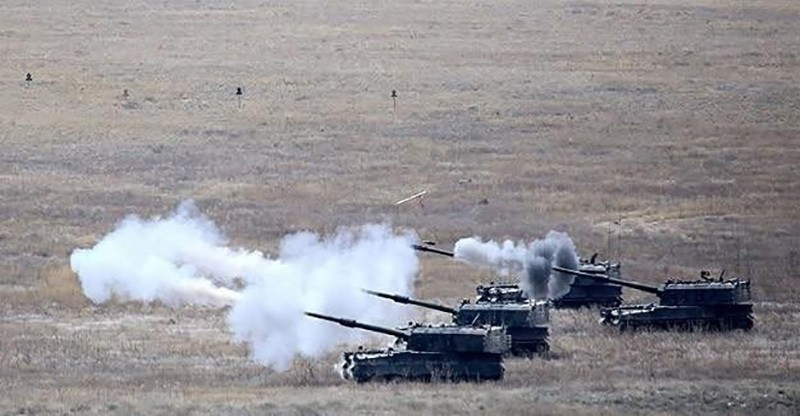 Turkey is ready to provide support of all kinds for the Jarablus operation, which is expected to be launched soon by the Free Syrian Army to liberate the town from Daesh, Foreign Minister Mevlüt Çavuşoğlu said Tuesday.

Speaking in a joint press conference with his Hungarian counterpart Peter Szijjarto in Ankara, Çavuşoğlu said that Turkey does not want Daesh to exist in Iraq and Syria, and Turkey will provide all contributions to cleanse the terrorist organization from neighboring countries.

"We currently provide all kinds of logistical support for coalition countries and actively participate in the fight against Daesh. We have killed more than 650 Daesh terrorists in [northern Iraq's] Bashiqa camp alone with artillery fire" Çavuşoğlu added.

Minister Çavuşoğlu noted that a tripartite meeting between U.S. Vice President Joe Biden, who will visit Ankara on Wednesday, and Kurdistan Regional Government President Massoud Barzani, who visits Ankara this evening, will not take place.

Envoy to Israel to be appointed soon

Turkish Foreign Minister Çavuşoğlu continued by stating that Turkey's Tel Aviv ambassador is soon to be announced in the upcoming days as Turkey has recently normalized its relations with Israel as the Parliament approved an agreement concerning restoring relations on Saturday.

With regards to the Turkish diplomats who have been called back to the central office in Ankara under FETÖ investigations, Çavuşoğlu stated that 332 foreign ministry personnel have been either dismissed from duty or remain at the central office until investigations are finalized. He added that 31 personnel who were recalled to Turkey did not come back, and Turkey will continue initiatives for their extradition, while 89 personnel have been discharged from the ministry after the coup attempt.

He also stressed that those 34 former foreign ministry personnel who were operating in the Prime Ministry have either been dismissed or arrested.

"Whoever attacks Turkey, attacks the security of EU"

The Hungarian foreign minister has been the third minister from the European Union (EU) to arrive in Ankara following the failed coup attempt by the Gülenists. Touching upon the coup attempt, Hungarian Minister Szijjártó underlined that "whoever attacks Turkey, attacks the security of EU."

Continuing on with his remarks by defining the coup attempt on July 15th as a terrorist attack, Szijjártó stated that there should not be any criticisms made to the Turkish government on their reactions following the coup attempt as he noted that he was disappointed by the criticisms made to Turkey. While the Hungarian minister further urged the EU states not to consider Turkey as a friend due to migration deal, he also underlined that it is harmful to criticize the reactions of the Turkish government. Responding to Daily Sabah's question on Hungary's combat against Gülenists, Szijjártó informed that the Hungarian government began its investigations on those who are affiliated with the terror-cult as he assured that necessary steps would be taken once investigations are finalized.