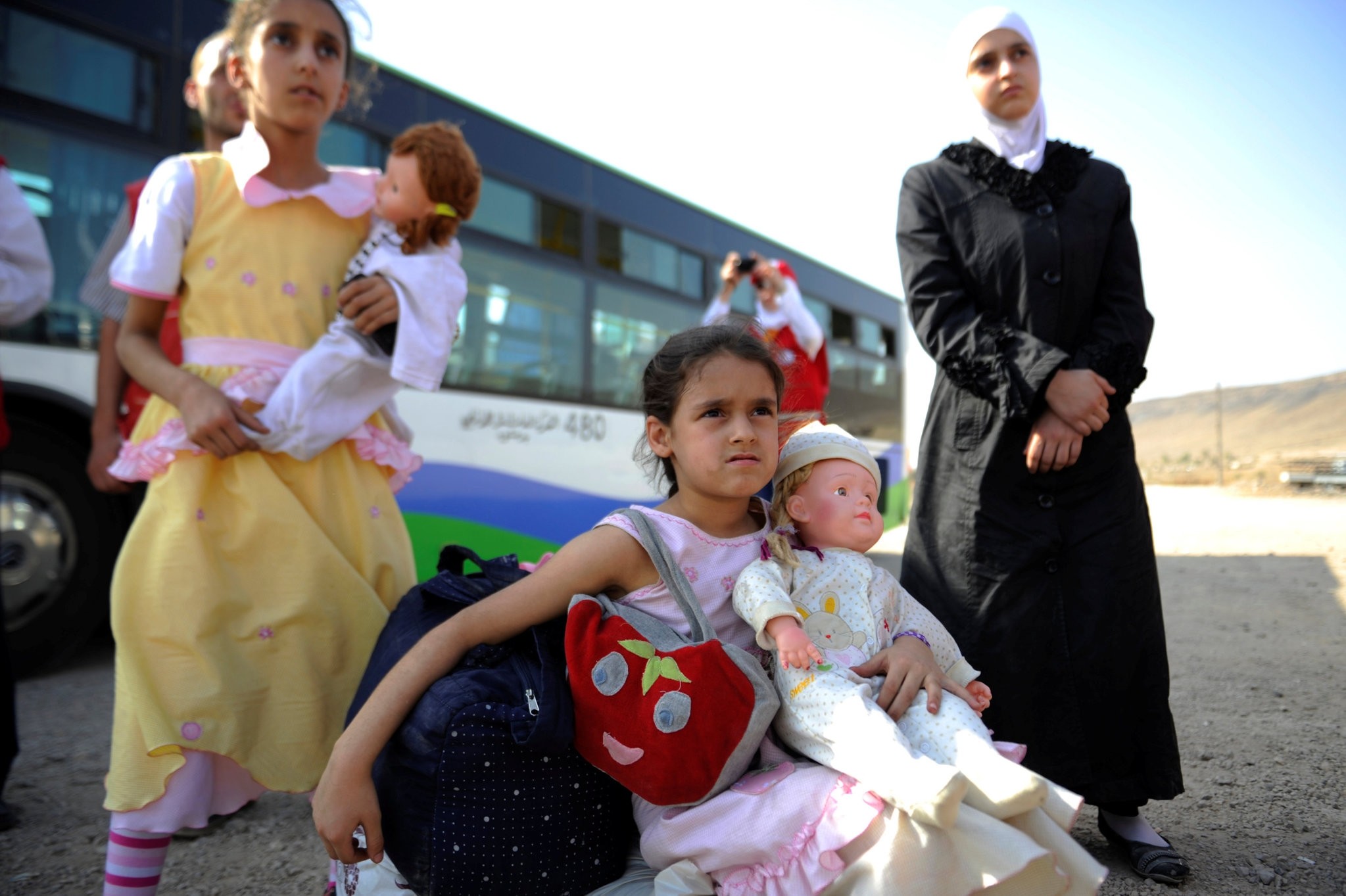 Girls that were evacuated from the besieged Damascus suburb of Daraya arrive to a camp inside Herjalleh suburb of Damascus, August 27, 2016. (REUTERS Photo)
by French Press Agency - AFP Aug 28, 2016 12:00 am

Yazan, a four-year-old who has never known anything but deprivation, has finally discovered the joy of ice cream after being evacuated from the besieged town of Daraya near the capital of war-torn Syria.

His town, one of the first to rise up against the regime of Bashar al-Assad in Syria's brutal conflict, had endured a strict army-imposed siege since late 2012.

This week, under a deal between the government and rebel forces who controlled it, Daraya's thousands of civilians and rebel fighters were all evacuated from the town, devastated by constant bombardment.

Yazan's family and many of the civilians were transferred to Hrajela, a village under government control located around 20 kilometres (12 miles) southeast of Daraya.

"Every time Yazan sees sweets, he goes crazy," his mother Amina Kamel told AFP of the youngest of her five children, among the families gathered on Saturday at a reception centre set up by the authorities.

"He's never tasted sweets before. He was over the moon when he saw biscuits," said Kamel, a pale-faced woman, aged 38, wearing an old, black coat.

"Yazan asked me if ice cream was some kind of cake."

In the two-day evacuation which started on Friday, around 4,000 civilians were to be directed to reception centres and at least 700 rebels escorted to the rebel-held city of Idlib in northwest Syria, the state news agency SANA said.

The four years of life under siege was just as hard on the adults.

"All anyone of us had to eat was a portion of soup at sunset and we'd then have to fast until sunset the next day," said Yazan's mother.

"We had no gas or electricity... My heart would break and I'd cry at the sight of my son starving and I had nothing to give him."

Kamel said her family spent most of their time in shelters to avoid the bombs which often rained down on Daraya. Like most other residents, she did not dare send the children to school.

Another mother, Houda, said her children were in awe of vegetables which used to be in plentiful supply in the agricultural province of Damascus before the war.

"My children, who are three and five, were very surprised to see tomatoes. It was the first time for them," said the 30-year-old woman. "All we had to survive on was grass."

The surrender of Daraya, where Syrian authorities said soldiers deployed on Saturday, followed growing malnutrition and illness among its residents.

For Houda, leaving her hometown, despite all the suffering of the past four years, has been a heart-wrenching experience.

She said she brought along some stones "as a souvenir of the smell of the town", and hopes to return one day.

At the entrance to the reception centre, made up of 30 prefabricated units, children played under a blazing sun as Red Crescent volunteers distributed mattresses, blankets and food.

Apart from starvation, the evacuees said, fear had been the staple diet of everyday life in Daraya.

Adnan Naccache, 47, told of how he and his family spent each night for more than four months in a hole they had dug in a patch of open ground that was mostly spared bombardment.

"We would squeeze against each other, eight of us, and not dare to fall asleep for fear of the bombs," he said sternly.

"Life was hell. We were at the end of our tether. We even reached the point where we'd rather die than have to do without any food or medicine anymore."