Aleppo under heavy bombardment from Assad regime and Russian jets 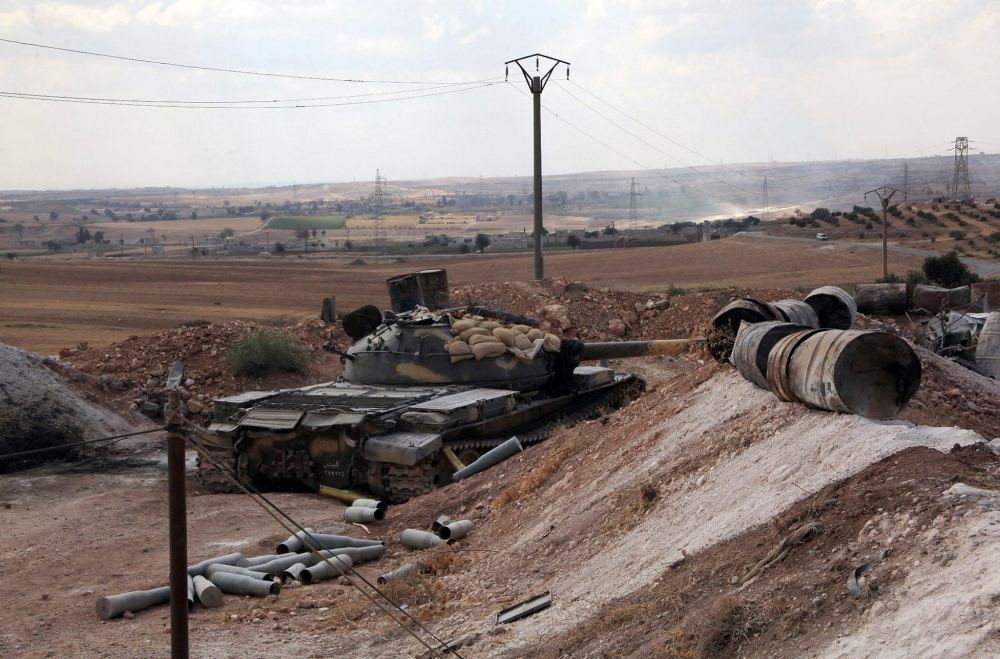 Assadu2019s army tank was seen on Sept. 4 at a location on the southern outskirts of the Syrian city of Aleppo after Syrian regime forces retook control of three military academies from the opposition.
by Daily Sabah with Wires Sep 07, 2016 12:00 am

After renewing the siege on opposition-held Aleppo, Assad's forces have made progress inside Aleppo to capture the strategic Ramousa district with Russian jets pounding the southern countryside

Assad regime forces backed by Russian airstrikes have made progress in opposition-held Aleppo as they stormed the strategic Ramousa District in southern Aleppo in order to capture the entire district with Russian jets conducting airstrikes. According to the local media, the Syrian regime and their allies reportedly captured the Ramousa Oven and al-Dabaghat Plant inside the district after a fierce battle with opposition groups on Tuesday morning.

The Ramousa offensive by Assad forces aims to strengthen the buffer zone around their main supply route that feeds into Aleppo from the southern countryside of the province.

Apart from Assad regime's assault in southern Aleppo, the Syrian regime and its allies advanced towards the key town of Khan Touman. A violent exchange was reported in the Khan Touman axis on Tuesday morning as the opposition groups reinforced the area in anticipation for a possible assault.

Assad regime forces and allied militias recaptured areas in southwestern Aleppo on Sunday that opposition fighters had seized last month and laid siege to the city's opposition-held eastern sector for a second time since July after retaking control of three military academies from the opposition on Sunday. The battle for Syria's second-biggest city Aleppo is of great significance to all sides due to its enormous strategic and geographic importance and will likely determine the country's fate.

After the Artillery Academy was captured by the Assad regime in southern Aleppo on Sunday, the Assad forces expanded their control in the area of military academies and targeted hilltops located near the strategic military installation, which paved the way for the surrounding of the strategic Ramousa district and the southern sector of the 1070 al-Hamdaniyah Housing Project. The latest offensive by the Assad regime has led to opposition supply lines being cut in the city.

"They fired at civilians and anything that moved. This led to slower traffic, but after their gains yesterday traffic is completely paralyzed," said Mohammed Aref al-Sharfi, a member of the opposition-run Aleppo Province's local council.

Prices inside opposition-held parts of the city have gone up ten-fold, with no new supplies brought in for 12 days because of Russian air strikes and Syrian army bombardments, said Brita Hagi Hassan, president of the city council for eastern Aleppo.

Escalating Russian bombing of their supply lines from Idlib, the source of most opposition reinforcements, had exposed rebel positions in Ramousa, where they are still entrenched, two opposition fighters there said.

An operation in northern Syria backed by Turkey may also have diverted fighters who would otherwise have been defending Aleppo, some rebels said.

Syrian state television throughout Monday broadcasted grisly footage showing the mangled, dust-smeared remains of rebel fighters around southwest Aleppo, and of the rubble-strewn districts captured by the army. "The Assad regime knows the language of force and with its jets uses scorched-earth bombing so its troops then advance and take territory. But can they hold on to it?" said Abu Abdullah al-Shami, a rebel from the Failaq al-Sham group.
RELATED TOPICS