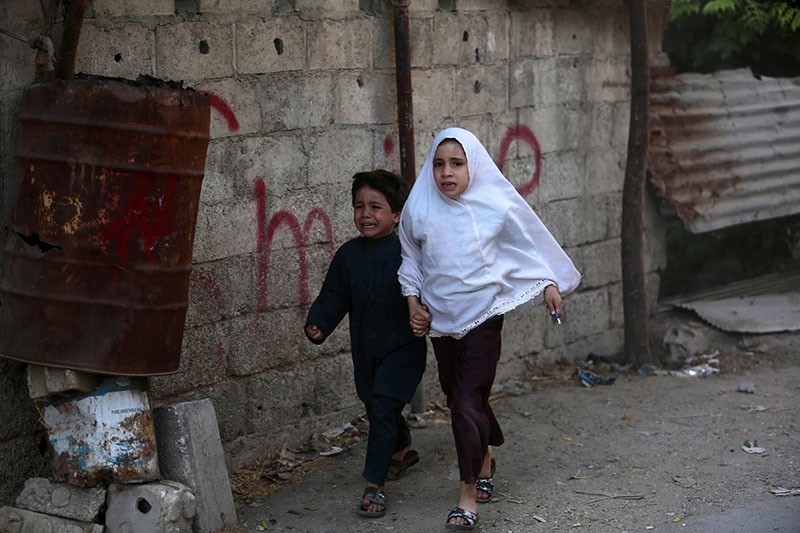 Syrian children run for cover following a reported airstrike on Kafr Batna, in the rebel-held Eastern Ghouta area, on the outskirts of the capital Damascus, on September 30, 2016. (AFP Photo)
by Oct 01, 2016 12:00 am

At least two barrel bombs hit the largest hospital in the opposition-held side of Syria's Aleppo city on Saturday, the medical organisation that supports it said.

The facility, known as M10, had already been hit by heavy bombardment on Wednesday along with the second-largest hospital in the area in what UN chief Ban Ki-moon denounced as "war crimes."

"Two barrel bombs hit the M10 hospital and there were reports of a cluster bomb as well," Adham Sahloul of the Syrian American Medical Society (SAMS) said of Saturday's attack.

Both facilities were put out of service by Wednesday's bombardment, leaving only six operational hospitals in the eastern parts of the city, according to SAMS.

"One person was killed and the field hospital is out of service," said Observatory head Rami Abdel Rahman.

He was not able to immediately confirm if the victim was a patient at the facility or a member of staff.

The recent bombardment of Aleppo has been some of the worst in Syria's five-year civil war, leaving more than 220 people dead and turning residential buildings into heaps of rubble.

The World Health Organization has called Syria the most dangerous place in the world for health workers.