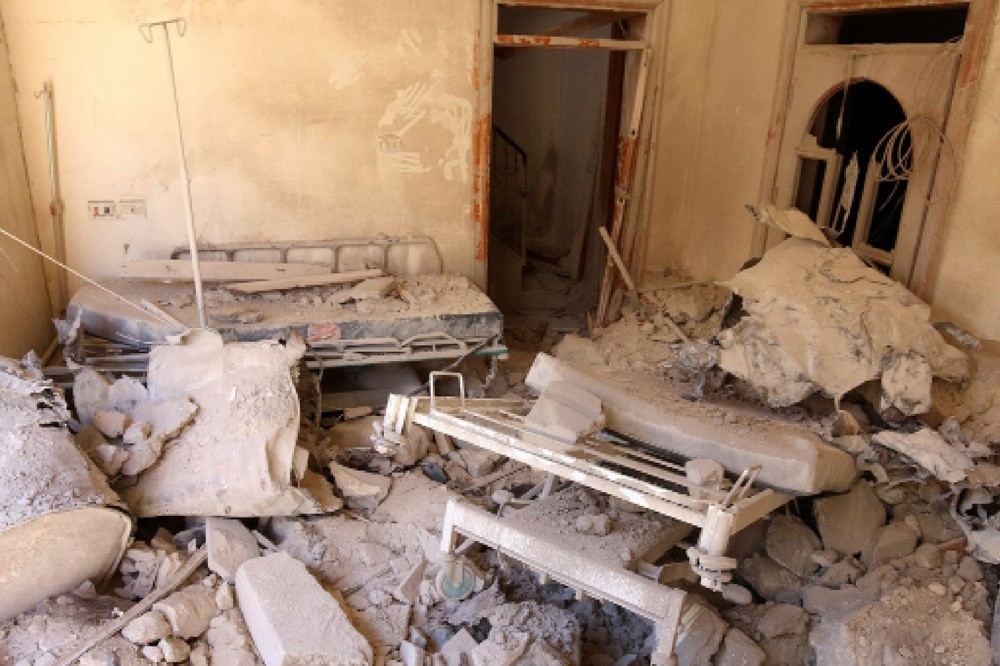 A damaged field hospital room is seen after airstrikes in a opposition-held area in Aleppo, Syria Oct. 1.
by Compiled from Wire Services Oct 03, 2016 12:00 am

Russia and the U.S. steps up word of words, as Aleppo's largest hospital was hit in a renewed ferocious bombardment by Russia-backed Assad forces

After a week-long cease-fire broke down on Sept. 19, the relentless Russia-backed air campaign in east Aleppo has damaged the largest hospital in the city once again. As the humanitarian situation in east Aleppo worsens, the war of words between the United States and Russia has intensified. Russia warned the United States Saturday against carrying out any attacks on Syrian government forces, saying it would have repercussions across the Middle East as government forces captured a hill on the edge of the northern city of Aleppo under the cover of airstrikes. Russian news agencies quoted Foreign Ministry spokeswoman Maria Zakharova as saying that a U.S. intervention against the Syrian army "will lead to terrible, tectonic consequences not only on the territory of this country but also in the region on the whole."

She said regime change in Syria would create a vacuum that would be "quickly filled" by "terrorists of all stripes."

U.S.-Russian tensions over Syria have escalated since the breakdown of a cease-fire last month, with each side blaming the other for its failure. Assad forces backed by Russian warplanes have launched a major onslaught on opposition-held parts of Aleppo.

In leaked audio published by the New York Times, U.S. Secretary of State John Kerry expressed frustration that his diplomatic efforts to end Syria's civil war had not been backed up by U.S. military force.

"I've argued for the use of force... but things evolved into a different process," he said to a group of Syrian civilians last week in New York.

Moscow said Thursday it would continue its campaign, despite Washington's threat and international concern about Aleppo.

Meanwhile, the largest hospital in opposition-held east Aleppo was bombed for the second time in days as Syrian government forces pressed a Russian-backed offensive to retake the entire city. "Two barrel bombs hit the M10 hospital and there were reports of a cluster bomb as well," said Adham Sahloul of the Syrian American Medical Society (SAMS). Sahloul said a small group of patients and doctors "were inside the hospital for basic triage, bandaging, and cleaning services for emergency cases" when the bombardment began.

Doctors Without Borders (MSF) decried the "bloodbath," saying the city's eastern rebel-held portion had become "a giant kill box." It said from Sept. 21 to 26, hospitals still functioning in Aleppo reportedly receiving more than 822 wounded, including at least 221 children, and more than 278 dead bodies including 96 children, according to the Directorate of Health in east Aleppo.

"Bombs are raining from ["Assad forces'] planes and the whole of east Aleppo has become a giant kill box," MSF director of operations Xisco Villalonga said in a statement on Friday. "The Syrian [regime] must stop the indiscriminate bombing, and Russia as an indispensable political and military ally of [Assad forces] has the responsibility to exert the pressure to stop this," he added.

The U.N's Under-Secretary-General for Humanitarian Affairs, Stephen O'Brien, said he was "deeply alarmed by the ferocious pummeling of eastern Aleppo" and reiterated U.N. calls for a pause in the fighting, medical evacuations and access for aid. "The health system is on the verge of total collapse with patients being turned away and no medicines available to treat even the most common ailments." "With clean water and food in very short supply, the number of people requiring urgent medical evacuations is likely to rise dramatically in the coming days," he said.

According to figures released by British-based Syrian Observatory for Human Rights, 3,804 civilians were killed during Russia-backed airstrikes adding that at least 20,000 people have been wounded. "We do not consider as reliable the information... coming from this organization, which is based in the United Kingdom," Kremlin spokesman Dmitry Peskov told reporters.
RELATED TOPICS