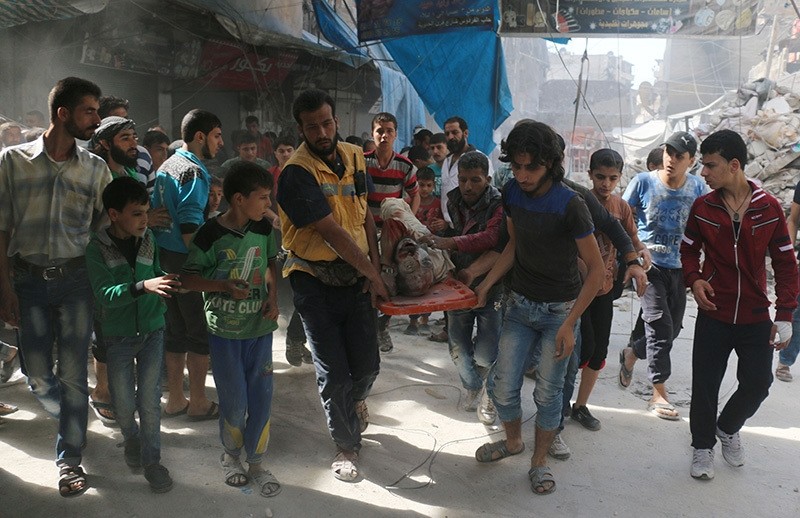 Syrians carry the body of a man following air strikes on the rebel-held Fardous neighbourhood of the northern embattled Syrian city of Aleppo on October 12, 2016
by Daily Sabah with AFP Oct 12, 2016 12:00 am

Activists say the death toll in rebel-held Aleppo in Syria continues to rise with at least 27 dead on Tuesday as the Assad forces push to weed out rebels. Russia, meanwhile, faces what Kremlin officials call ‘Russophobia’ after British FM Johnson called public protests at its London embassy over airstrikes in Aleppo

Casualties pile up in Syria's Aleppo controlled by rebels as the forces loyal to the Assad regime push to recapture it with the aid of Russian airstrikes. Russia's assistance meanwhile continues to draw the ire of Europe with the latest salvo from British Foreign Minister Boris Johnson who called for "picketing" at the Russian embassy in London.

At least 15 people were killed in fresh air strikes and artillery fire on rebel-held areas of Syria's Aleppo on Wednesday, a monitor said.

The Syrian Observatory for Human Rights said the death toll was expected to rise due to the number of wounded that are in serious condition.

The Britain-based monitor said among the areas hit in the bombardment was a market in the neighborhood of Fardos.

The deaths come a day after Russia stepped up its air raids on east Aleppo in support of an army operation to recapture the rebel-held sector of the city.

The Tuesday raids killed at least 27 people, among them four children, in several districts, including Fardos, according to the Observatory.

Four people were also killed and 14 wounded during rebel fire in government-held west Aleppo on Tuesday.

Among those who survived the Tuesday strikes in the district of Fardos was 13-year-old Jameel Mustafa Habbush, who was dug out of the rubble in a four-hour operation by the White Helmets rescue workers.

An AFP photographer at the scene said rescuers heard Habbush shouting from under the rubble and began digging towards him.

As they worked to free him, they administered oxygen, clamping a mask to his face as he emerged from the debris.

His father and younger brother were reportedly killed in the attack and his mother was taken to hospital with serious injuries.

Once Syria's economic powerhouse, Aleppo has been ravaged by the conflict that began with anti-government protests in March 2011.

In late September, the army announced an operation to recapture the rebel-held east Aleppo after the collapse of a short-lived truce.

Since then, more than 300 people have been killed in bombardments of rebel-held areas, according to the Observatory.

British foreign minister Boris Johnson on Tuesday called for anti-war campaigners to protest outside the Russian embassy in London, during a parliamentary debate on the bombing of Aleppo in Syria.

"I'd certainly like to see demonstrations outside the Russian embassy," Johnson told MPs in the parliament.

Johnson, the former mayor of London known for his many public gaffes, said the "wells of outrage are growing exhausted" and anti-war groups were not expressing sufficient outrage at the conflict in Aleppo.

"Where is the Stop the War Coalition at the moment? Where are they?" he said.

The Stop the War group was co-founded by current opposition Labour Party leader Jeremy Corbyn to protest against the wars in Afghanistan and Iraq.

It brought millions of Britons into the streets to protest against the build-up to the invasion of Iraq in 2003.

Johnson was responding to a question from Labour member of parliament Ann Clwyd, who called for protests by millions of people outside Russian embassies worldwide.

"I would therefore call once again on everyone who cares about the plight of Syrian civilians to picket the Russian embassy in London and in capitals around the world from today," she said.

"Two million, three million, four million people. It can be done. It has been done in the past."

"The international community has an avowed responsibility to protect and that protection must be exerted," the member of parliament from Prime Minister Theresa May's governing Conservative Party said.

"If that means confronting Russian airpower defensively, on behalf of the innocent people on the ground who we are trying to protect, then we should do that."

Mitchell compared Russia's actions to those of Nazi forces during the Spanish Civil War in the 1930s.

Russia has been waging a punishing aerial bombing campaign in Syria for more than a year in support of President Bashar al-Assad's forces, part of a multi-front war that has claimed some 300,000 lives and seen Moscow further estranged from the West.

Russian President Vladimir Putin on Tuesday cancelled a visit to France in a furious row over Moscow's role in the Syrian conflict.

The announcement from the Kremlin came a day after French President Francois Hollande said Syrian forces had committed a "war crime" in the battered city of Aleppo with the support of Russian air strikes.

Moscow yesterday hit out at Johnson for accusing Russia of committing war crimes in Syria, dismissing his comments as "Russophobic hysteria."

Russian defense ministry spokesman Igor Konashenkov said in a statement that Johnson's "accusing Russia of all mortal sins" was just a "storm in a teacup."

"The Russophobic hysteria that is regularly fueled by certain members of the British establishment has not been taken seriously for a long time," he said.

Konashenkov said the Russian air force was not responsible for the bombing of a U.N. convoy in the Aleppo region last month and accused Britain of withholding the evidence it says it has against Russia.

"The alleged 'evidence' you say you have won't be worth a penny if it is made available to everyone," he said.