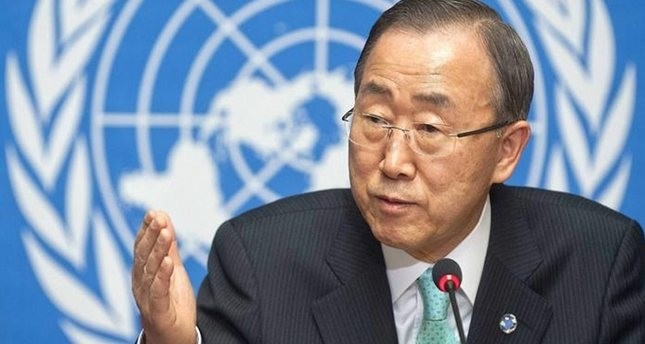 Ban Ki-moon
by Daily Sabah with Reuters Oct 21, 2016 12:00 am
United Nations Secretary-General Ban Ki-moon pushed on Thursday for the 193-member General Assembly to hold a rare emergency special session on Syria since a deadlocked Security Council has failed to take action to end the nearly six-year war.

Under a 1950 resolution, an emergency special session can be called for the General Assembly to consider a matter "with a view to making appropriate recommendations to members for collective measures" if the Security Council fails to act.

"I call on all of you to cooperate and fulfill your collective responsibility to protect," Ban said. "I regret that the Security Council has failed to discharge its responsibilities to uphold peace and security for Syria."

Russia, a Syrian ally that has been providing military backing to the Assad regime for the past year, has vetoed five Security Council resolutions on Syria since 2011. China joined Moscow in vetoing the first four resolutions.

Ban and U.N. Syria envoy Staffan de Mistura informally briefed the General Assembly on Thursday at the request of Canada and more than a third of U.N. states. In its request letter, Canada said one aim of the meeting was to see if there was enough support for an emergency special session.

Such a session can be called by an assembly majority or nine members of the 15-member Security Council. Only 10 such sessions have been convened, and the last time the General Assembly met in such a session was in 2009 on Israeli actions in occupied Palestinian territories.

An emergency special session of the General Assembly could adopt a resolution on Syria recommending action.

Human Rights Watch executive director Ken Roth said that at a mininum a General Assembly resolution should condemn the targeting of civilians and insist on the lifting of sieges.

"We would like to see one step further which is that it create a prosecutor," he told Reuters. "If you had a prosecutor they could begin to collect the evidence and make ready to go cases."

International outrage has grown since Syrian regime forces, supported by Iranian-backed Shiite militias and Russian air strikes, announced a major offensive to capture the rebel-held part of Aleppo city in late September that has killed hundreds.

Russia told the United Nations on Thursday it would stop bombing Aleppo for 11 hours a day for four days.

"It is not, and must never become, praiseworthy to refrain from committing atrocities. One cannot get credit for an eight- or 11-hour break in months of merciless bombing," U.S. Ambassador Samantha Power said on Thursday.

Russian Ambassador Vitaly Churkin was critical of U.N. officials and states for failing to focus on the fight against terrorism in Syria, where Daesh militants have taken advantage of the chaos to seize territory.
Last Update: Oct 21, 2016 5:24 pm
RELATED TOPICS