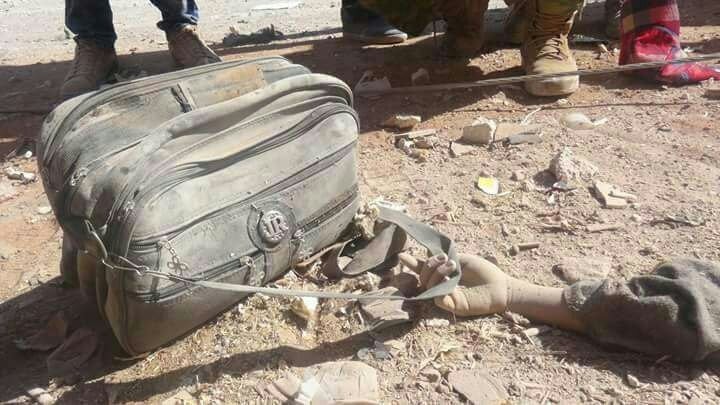 (Amateur photo from the bombardment of school in Idlib, Syria)
by Compiled from Wire Services Oct 26, 2016 12:00 am

UNICEF Director Alan Lane said that six teachers also died in the attacks, while the Syrian Observatory for Human Rights said that 35 people in total had died.

"This is a tragedy. It is an outrage. And if deliberate, it is a war crime," Lane said in a statement.

"This latest atrocity may be the deadliest attack on a school sincethe war began more than five years ago."

"When will the world's revulsion at such barbarity be matched by insistence that this must stop?" added the UNICEF director.

"The dead children are schoolchildren and the planes are believed to be Russian," Rami Abdel-Rahman, the organization's head said.

Activists posted pictures of bodies of small children and schoolbags covered with blood allegedly as a result of the bombing.

In recent months, Idlib, a hub for rebels, has been the target of air bombardment.

"One rocket hit the entrance of the school as students were leaving to go home, after the school administration decided to end classes for the day because of the raids," the activist said, speaking on condition of anonymity.

Other activists from the province circulated a photograph on social media of a child's arm, seared off above the elbow, still clutching the strap of a dusty black rucksack.