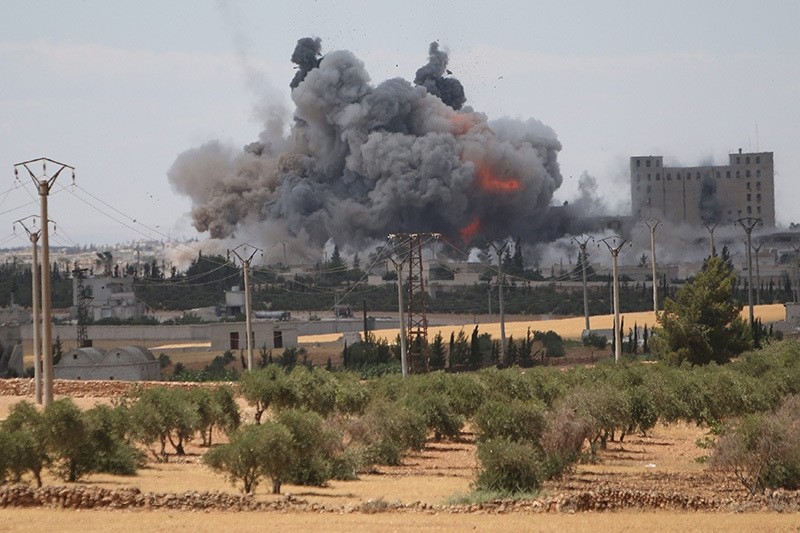 Smoke and flame rise after what fighters of the Syria Democratic Forces (SDF) said were U.S.-led air strikes on the mills of Manbij where Daesh militants are positioned, in Aleppo Governorate, Syria June 16, 2016. (Reuters Photo)
by Daily Sabah with AP Oct 26, 2016 12:00 am

A leading international rights group says that homemade land mines planted by the Daesh terrorist group have killed and wounded hundreds of civilians, including dozens of children, in a town recently freed of the militants in northern Syria.

Human Rights Watch says in a report issued Wednesday that it collected the names of 69 civilians killed — including 19 children — by improvised mines in schools, homes and on roads in Manbij during a five-day investigation this month.

The victims were killed during and after the fighting for control of the town.

Ole Solvang, deputy emergencies director at the New York-based group, says Daesh "mined virtually everything including, quite literally, the kitchen sink before they left."

Turkey has voiced reservations in YPG moving into Manbij, which has a predominantly Arab population. The country also considers YPG controlling a continuous area south of its border a national security threat, and repeatedly asked SDF's main supporter U.S. for YPG to retreat east of the Euphrates River.

On Aug. 24, Turkey launched Euphrates Shield operation to clear the towns of Jarablus, al Rai and al Bab from Daesh, while preventing YPG to extend its control over these towns.

Since the operation began, Turkish experts and Free Syrian Army (FSA) forces supported by the Turkish military carried out detailed scans after Daesh terrorists were ousted from civilian settlements, only to allow civilians' return after the towns were fully secured.
Last Update: Oct 26, 2016 1:01 pm
RELATED TOPICS