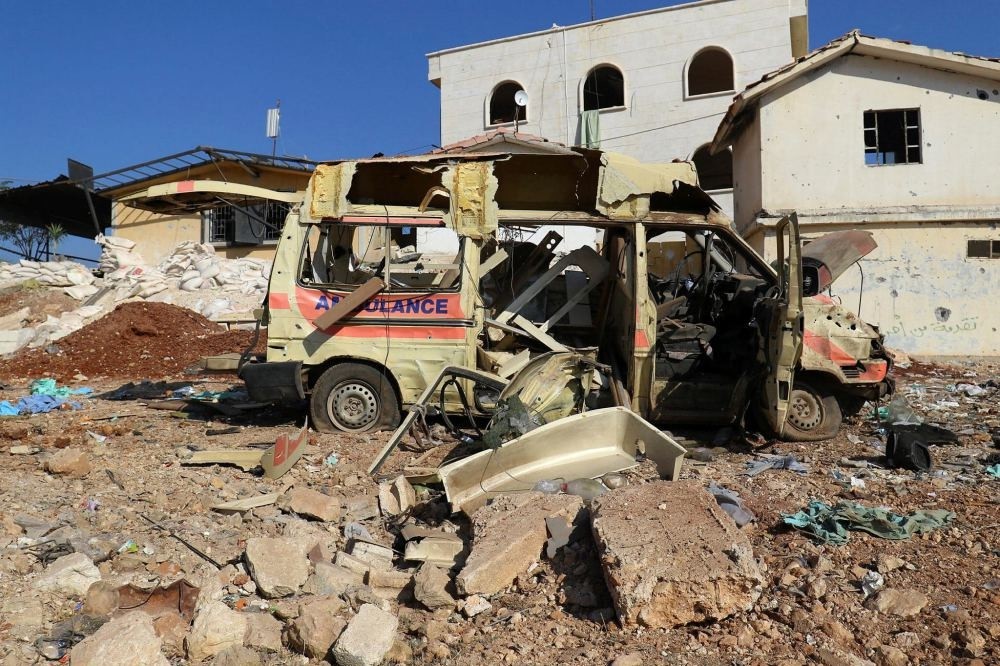 A destroyed ambulance is pictured after an airstrike on the opposition-held town of Atareb, in the countryside west of Aleppo, Syria Nov. 15.
by Compiled from Wire Services Nov 16, 2016 12:00 am

Russia announced a major air offensive in Syria yesterday as Syrian opposition activists reported the first airstrikes in three weeks in the besieged, opposition-held part of the northern city of Aleppo.

Russian Defense Minister Sergei Shoigu said in a meeting with Putin on Tuesday that the operation involves aircraft carrier Admiral Kuznetsov, which made a much-publicized trip to Syria's shores last month. He said Russian warplanes will target ammunition depots, training camps and armaments factories in the opposition-held province of Idlib and the central province of Homs. He did not immediately mention Aleppo.

"For the first time in our naval history, the aircraft carrier Admiral Kuznetsov started taking part in combat," Shoigu said at a meeting with President Vladimir Putin in the Black Sea city of Sochi, according to televised footage. "Today from this carrier, our Sukhoi-33 [bombers] began their operations", he said.

The activists reported strikes in all three places. The Britain-based Syrian Observatory for Human Rights said missiles fired from Russian warships in the Mediterranean have struck areas in Aleppo and Idlib provinces. The Observatory said airstrikes also struck three neighborhoods in Aleppo city, but had no immediate word on casualties.

Russia has been carrying out a bombing campaign in Syria for the past year in support of its ally Bashar al-Assad and deployed a naval contingent to back up its operation.

The Admiral Kuznetsov, Russia's sole aircraft carrier, arrived in the eastern Mediterranean off the Syrian coast as part of a flotilla of ships sent to reinforce Russia's military in the area. The biggest naval deployment of recent years saw the flotilla sail from Russia's Arctic waters down through the North Sea and along the Channel.

This prompted NATO chief Jens Stoltenberg to warn the ships could be used to take part in air strikes in Syria and "increase human and civilian suffering."

During initial flights from Admiral Kuznetsov aircraft carrier, a Russian MiG crashed into the sea while attempting to land, the defense ministry said Monday. The pilot ejected and was rescued unhurt, it said.

Shoigu said the "major operation" began at 0730 GMT Tuesday aiming to inflict heavy damage on "the Islamic State group and the Al-Nusra Front's positions in Idlib and Homs provinces." Another ship in the flotilla, the frigate Admiral Grigorovich also fired Kalibr cruise missiles at Syrian targets, the minister said. The operations targeted stores of ammunition and factories producing chemical warfare agents. "They will continue," Shoigu said.

The naval fleet is protected by S-400 and S-300 air defense systems that "cover the sea area practically to Cyprus" as well as by Bastion missile complexes on shore, the defense chief said. "Today we are able to hit both sea and land targets across almost 350 kilometers (218 miles) of sea and almost 450 kilometers of land," Shoigu said. In mid-October, Russia said it would halt weeks of deadly airstrikes to allow opposition groups to leave eastern Aleppo. The opposition fighters refused to take up the offer and the United Nations failed to negotiate the delivery of aid into the besieged area. The Assad siege has left an estimated 275,000 people trapped, with no aid allowed in since July, amid a punishing bombing campaign.
RELATED TOPICS