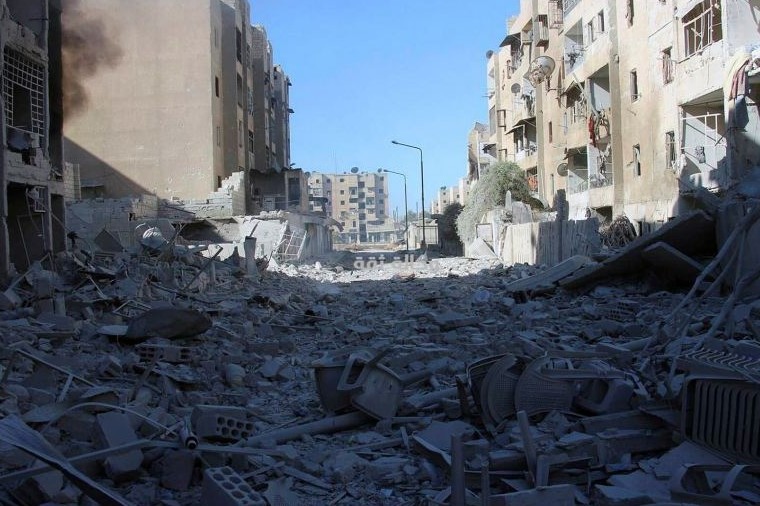 Damaged buildings after airstrikes hit the al-Shaar neighborhood of Aleppo, Syria, Nov. 18.
by Compiled from Wire Services Nov 19, 2016 12:00 am

Intensive bombings pummeled Syria's opposition-held city of Aleppo. More than 100 people have been killed since Russia launched its largest assault on the war-torn country

Intensive bombings pummeled Syria's rebel-held eastern neighborhoods of the city of Aleppo on Friday, residents and rescuers said, hitting an area housing several hospitals and sending the chief of a pediatrics clinic in a frantic search for a place to move his young patients.

The attacks mark the fourth day of renewed assault by Syrian government warplanes on eastern Aleppo districts, an opposition-held enclave of 275,000 people. The onslaught began with a Russian announcement of its own offensive on the northern opposition-controlled Idlib province and the central Homs province.

Tuesday's bombing on eastern Aleppo appeared to mark the end of a pause inside the city declared by Russia on Oct. 18. Aleppo is the focal point of the six-year war in Syria. Assad has said he is determined to retake the country's largest city and former commercial capital.

U.S. Secretary of State John Kerry said Thursday he discussed Ukraine and "all aspects" of Aleppo including renewed bombing in the Syrian city this week in a meeting with Russia's Foreign Minister Sergei Lavrov. Speaking to reporters after their one-on-one talk during the Asia Pacific Economic Cooperation summit in Peru, Lavrov denied that Russia's military was carrying out airstrikes in opposition-held Aleppo this week.

"Our air force and the Syrian air force only work in the provinces of Idlib and Homs to prevent the [Daesh] who might be leaving Mosul from getting to Syria," Lavrov said, referring to Daesh militants in Iraq.

In mid-October, Russia said it would halt weeks of deadly airstrikes to allow opposition groups to leave eastern Aleppo. The opposition fighters refused to take up the offer and the United Nations failed to negotiate the delivery of aid into the besieged area. The Assad siege has left an estimated 275,000 people trapped, with no aid allowed in since July, amid a punishing bombing campaign.

Western countries and human rights activists have accused the air forces of Assad and Moscow of repeatedly targeting hospitals, bread lines and other civilian infrastructure in territory controlled by the opposition. As the humanitarian situation worsens in Aleppo, the United Nations stated last week that food rations has run out in east Aleppo, as the quarter of a million people besieged in the Syrian city entered what is expected to be a cruel winter.

Syria has been locked in a vicious civil war since early 2011, when the regime cracked down on pro-democracy protests erupting as part of the "Arab Spring" uprisings with unexpected ferocity. Since then, more than a quarter of a million people have been killed and more than 10 million displaced across the war-torn country, according to U.N. figures.
Last Update: Nov 19, 2016 1:04 am
RELATED TOPICS