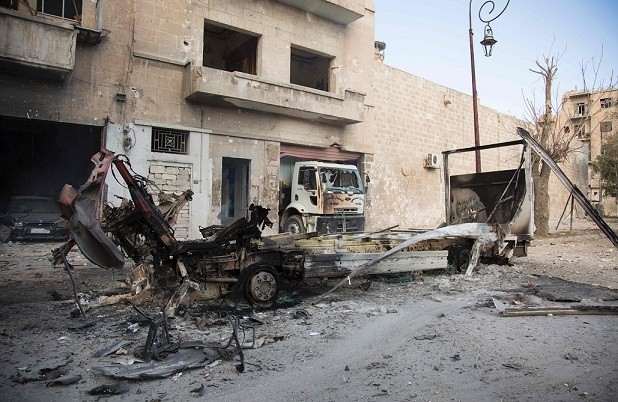 The wreackage of vehicles are seen outside a civil defence centre in Aleppou2019s moderate-held neighbourhood of Bab al-Nayrab on Nov. 19, 2016, following recent regime air strikes. (AFP Photo)
by Anadolu Agency Nov 19, 2016 12:00 am

At least 40 people were killed and scores injured Saturday in a new wave of regime and Russian airstrikes on the war-battered Aleppo city in northeastern Syria, according to a moderate civil defense official.

"Forty civilians were killed and 180 others injured in the attacks," he told Anadolu Agency.

According to al-Ansari, civil defense teams were struggling to reach the bombed areas to search for survivors under the debris.

On Friday, around 40 people were killed in Russian bombardment of moderate-held areas in Aleppo.

Around 300,000 people live under a crippling siege in eastern Aleppo since September amid relentless airstrikes by regime forces and Russian allies.

On Friday, all hospitals in eastern Aleppo were forced to shut down as a result of the ongoing attacks by regime and Russian forces.

Syria has been locked in a devastating civil war since early 2011.