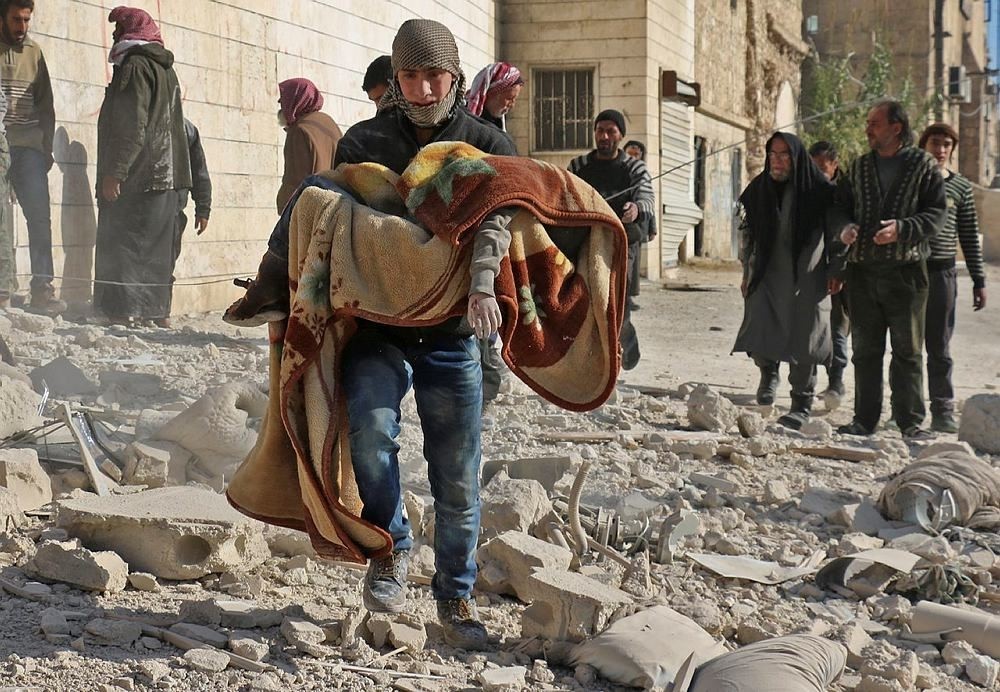 A man carries the covered body of a boy following a reported barrel bomb attack on the Bab al-Nairab neighbourhood of the northern Syrian city of Aleppo on November 24, 2016. (AFP Photo)
by Compiled from Wire Services Nov 25, 2016 12:00 am

At least 32 civilians, including five children, were killed Thursday in Bashar Assad's air strikes and artillery bombardment on opposition-held areas in eastern Aleppo, a monitor said citing a new toll.

The Syrian Observatory for Human Rights said Thursday's toll, up from an earlier figure of 16 killed, was one of the heaviest since Assad forces launched an offensive on eastern Aleppo on Nov. 15. "There was an escalation in the evening, with successive bombardments," Observatory head Rami Abdel Rahman told AFP, adding that many people were trapped under rubble.

"There are many wounded people, and bodies, still trapped under the rubble," he said, adding that several neighborhoods had been hit across opposition-controlled neighborhoods.

The humanitarian situation inside opposition-held eastern Aleppo "is worsening by the day," a Red Cross official told DPA news agency on Friday. Food stocks are running low, causing the prices of basic food items such as bread, flour, lentils and milk to skyrocket, said Ingy Sedky, spokeswoman of the International Committee of the Red Cross (ICRC) in Damascus.

Sedky added that fuel is running critically low in most neighborhoods in the city, and many people are completely deprived of electricity and heating in the current winter season.

"Bakeries, hospitals and homes are reliant on generators and in some cases communal generators have been shut down, leaving civilians in multiple neighborhoods without access to any form of electricity," Sedky said.

The Assad siege has left an estimated 275,000 people trapped, with no aid allowed in since July, amid a punishing bombing campaign.

Western countries and human rights activists have accused the air forces of Assad and Moscow of repeatedly targeting hospitals, bread lines and other civilian infrastructure in territory controlled by the opposition. As the humanitarian situation worsens in Aleppo, the United Nations said last week food rations have run out in eastern Aleppo, as the quarter of a million people besieged in the Syrian city entered what is expected to be a cruel winter.