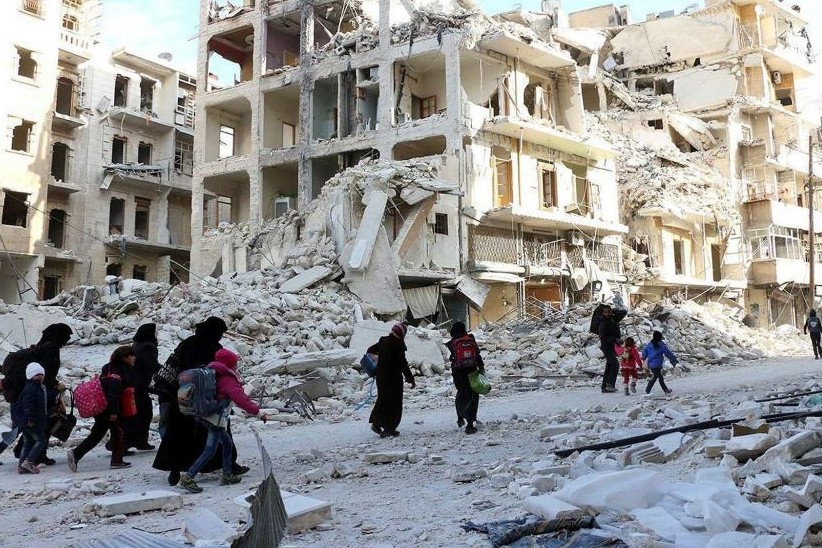 Displaced Syrian families evacuate the neighborhoods where the fighting occured in eastern Aleppo, Syria, Nov. 29.
by Compiled from Wire Services Dec 01, 2016 12:00 am
A barrage of artillery fire struck a housing area for displaced residents in opposition-held eastern Aleppo Wednesday, killing at least 51 civilians, activists said. Since mid-November, more than 739 civilians have been killed -- and hundreds more injured -- in regime attacks on eastern Aleppo, according to figures released by local civil defense officials.

Syrian regime forces have recently stepped up attacks on opposition-held parts of eastern Aleppo in an effort to retake the city and advance on Idlib, one of the Syrian opposition's last strongholds.

The fierce bombardments have forced hospitals and other medical facilities in the war-battered city to cease operations while most academic activities have been completely halted.

The Britain-based Syrian Observatory for Human Rights, which maintains a network of contacts in the war-torn country, said it was the second time the Jub al-Quba neighborhood in eastern Aleppo was struck in as many days. Thousands of east Aleppo residents have moved to Jub al-Quba and other such neighborhoods fleeing a regime advance on the opposition-held east.

The Syrian Civil Defense search-and-rescue group operating in eastern Aleppo put the toll at 45 killed. Images published by the Civil Defense showed bodies strewn on a debris-filled road in an attack they It blamed on Bashar al-Assad forces.

Syrian state media said two children were among the eight killed in shelling on the city's western neighborhoods, which it blamed on the opposition.

Tens of thousands of people have been displaced in Aleppo as pro-Assad forces press on with their campaign to reclaim the divided city.

The Observatory said more than 50,000 out of an estimated quarter-million inhabitants have been displaced by attacks on opposition-held eastern Aleppo over the past four days. The International Committee of the Red Cross says around 20,000 people have fled.

The Lebanese Al-Manar TV channel reported from the Aleppo countryside that Assad forces were advancing in the southern portion of the city's opposition enclave. The pro-Assad forces have seized much of the northern half of the enclave in a swift advance that began Saturday.

The U.N. condemned the "descent into hell" being endured by civilians in Aleppo. The U.N. Security Council held an emergency meeting yesterday in New York on the humanitarian crisis in Aleppo, where the Assad forces has captured a third of opposition-controlled east in recent days.
Last Update: Dec 01, 2016 2:06 am
RELATED TOPICS