No-fly zone a must in Syria to allow humanitarian aid, says doctor from Aleppo 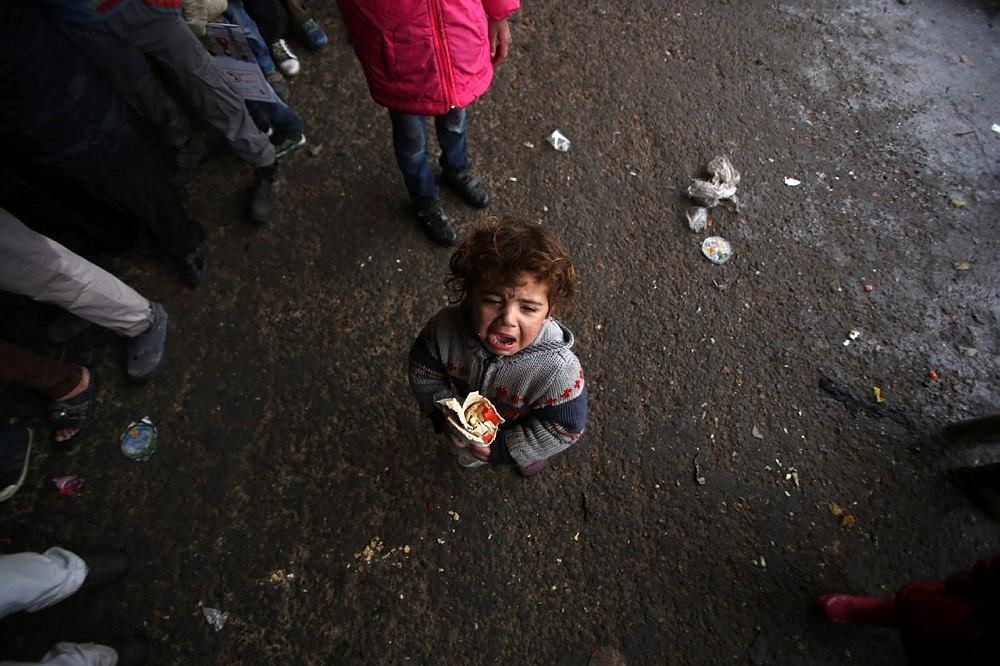 A Syrian child, who fled with his family from rebel-held areas in the city of Aleppo, reacts as he holds a sandwich on December 1, 2016, at a shelter in the neighbourhood of Jibrin, east of Aleppo. (AFP Photo)
by Anadolu Agency Dec 05, 2016 12:00 am
A medical doctor on Friday urged the international community to set up a no-fly zone in northern Syria to allow for humanitarian aid and treating victims in the war-torn country that now has few hospitals.

"We are pushing for a no-fly zone as the majority of the victims are because of the airstrikes - almost two-thirds," Syrian American Medical Society (SAMS) Vice President Dr. Basel Termanini said during a discussion at New York University's (NYU) Washington, D.C. campus.

"Those no-fly zones are very simple [to set up] and the international community should be pushing hard for that." Ankara has long proposed to establish safe zones in Syria since 2012, including a no-fly zone where displaced Syrians could be hosted, but could not find the necessary international support.

The Aleppo-born doctor said it is the first time in the 21st century that starvation has been used as a weapon of war and is especially being used in Aleppo.

An official from SAMS who wanted to remain anonymous told Anadolu Agency the organization is currently using small clinics and mobile clinics to treat the wounded.

"They have a smaller capacity and [medical staff] just try to set up [clinics] in basements [of the bombed buildings]," the official said. According to several reports from Syria, hospitals are no longer operating in Aleppo and very few are in other parts of northern Syria.

Termanini said although the situation in Syria appears to be complex, it had a very simple reason he described as a fight between a dictator and ordinary citizens who want democracy and freedom. He said he expects Daesh not to stay in Syria as the brutal culture of the militant group was not the culture of the ancient nation where people from different religions lived in peace for thousands of years until the Assad family took rule and misused power.

Having visited Syrian refugee camps in different countries, Termanini said Turkey was doing a great job providing good facilities, technologies and even work permits to residents. He compared conditions in Turkey with those in Lebanon where refugees pay for their own tents inside camps and are forced to leave the area once they turn 18 years old.

Professor Selçuk Şirin from the NYU's Applied Psychology Department, whose work focuses on the psychology of refugee children, said low school enrollment rates of refugees made them targets for recruitment into terror groups like al-Qaeda or Daesh that operate around refugee camps.

With the pilot program set to launch in Turkey's southeastern city of Şanlıurfa next week, his team wants to support children by providing game-based education opportunities. The panel organized jointly by the NYU and the Turkish Heritage Organization was accompanied by an exhibit that featured photographs by 16-year-old Turkish-American activist Sinem Oğuz.
RELATED TOPICS