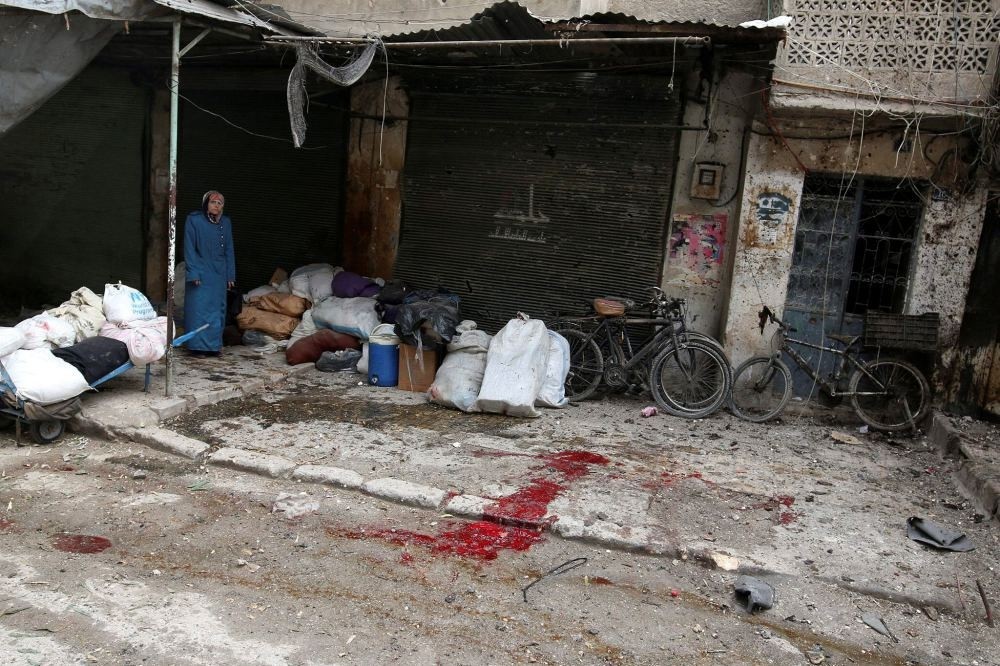 A woman stands near the blood-stained ground after strikes on opposition-held besieged al-Zebdieh district, in Aleppo, Syria, Dec. 5.
by Compiled from Wire Services Dec 08, 2016 12:00 am

Syrian opposition factions have proposed a five-day cease-fire for the evacuation of the sick and other civilians from the eastern part of the city of Aleppo. The opposition proposal comes as the Syrian regime and allied forces have gained control of three-quarters of the enclave that the opposition had controlled since 2012.

In the face of a blistering assault by forces loyal to Bashar Assad, the opposition was reported to have retreated yesterday from all of Aleppo's Old City, a UNESCO World Heritage Site famed for its medieval buildings and souk and the latest in a string of territorial losses. After three weeks of heavy fighting, Assad's forces appeared closer than ever to retaking all of Aleppo and winning their most important victory yet in the civil war that began in 2011.

After seizing areas east of the Old City on Tuesday, including the large and strategic Shaar neighborhood - the pro-Assad forces were in control of 75 percent of the territory previously held by the opposition in east Aleppo, the Observatory said.

The offensive showed no signs of slowing and overnight the army carried out heavy shelling of the al-Zabdiya neighborhood and other territory still under opposition control in the southeast of the city, the monitor said.

The assault has prompted a mass exodus of east Aleppo residents and the Observatory said yesterday that at least 80,000 had now fled their homes.

Opposition fighters have rejected calls to withdraw from the city, which had been divided between government and opposition forces since 2012, but issued a joint statement calling for an "immediate five-day humanitarian cease-fire." The proposal calls for the immediate evacuation of 500 seriously wounded Aleppo residents and for allowing civilians wishing to leave to head to the northern rural parts of Aleppo province. Capt. Abdel-Salam Abdel-Razek of the rebel Nour el-Din el-Zinki faction says the future of the city of Aleppo is to be negotiated during this humanitarian pause, which the opposition groups want the United Nations to monitor.

With the latest gains, the endgame for Aleppo, which has been carved up between Assad's forces and the opposition over the past four years, appears to be drawing even closer. If Aleppo — the country's former commercial hub — is captured by Assad's troops, it would be a turning point in the conflict, putting the four largest cities in Syria and the coastal region back under Assad's control.

The Assad regime and its ally Russia had previously rejected a cease-fire for the war-torn city, keeping up the military offensive that has forced opposition retreats and the massive displacement of Aleppo civilians. The U.S. Secretary of State John Kerry and Russian Foreign Minister Sergey Lavrov met yesterday for talks on Syria in Germany. Aleppo is the focal point of the six-year war in Syria. Assad said earlier he was determined to retake the country's largest city and former commercial capital as his forces have maintained a siege on the opposition-held eastern quarters since September. The U.N. estimates 275,000 people are trapped inside with dwindling supplies of food and medicine.
RELATED TOPICS