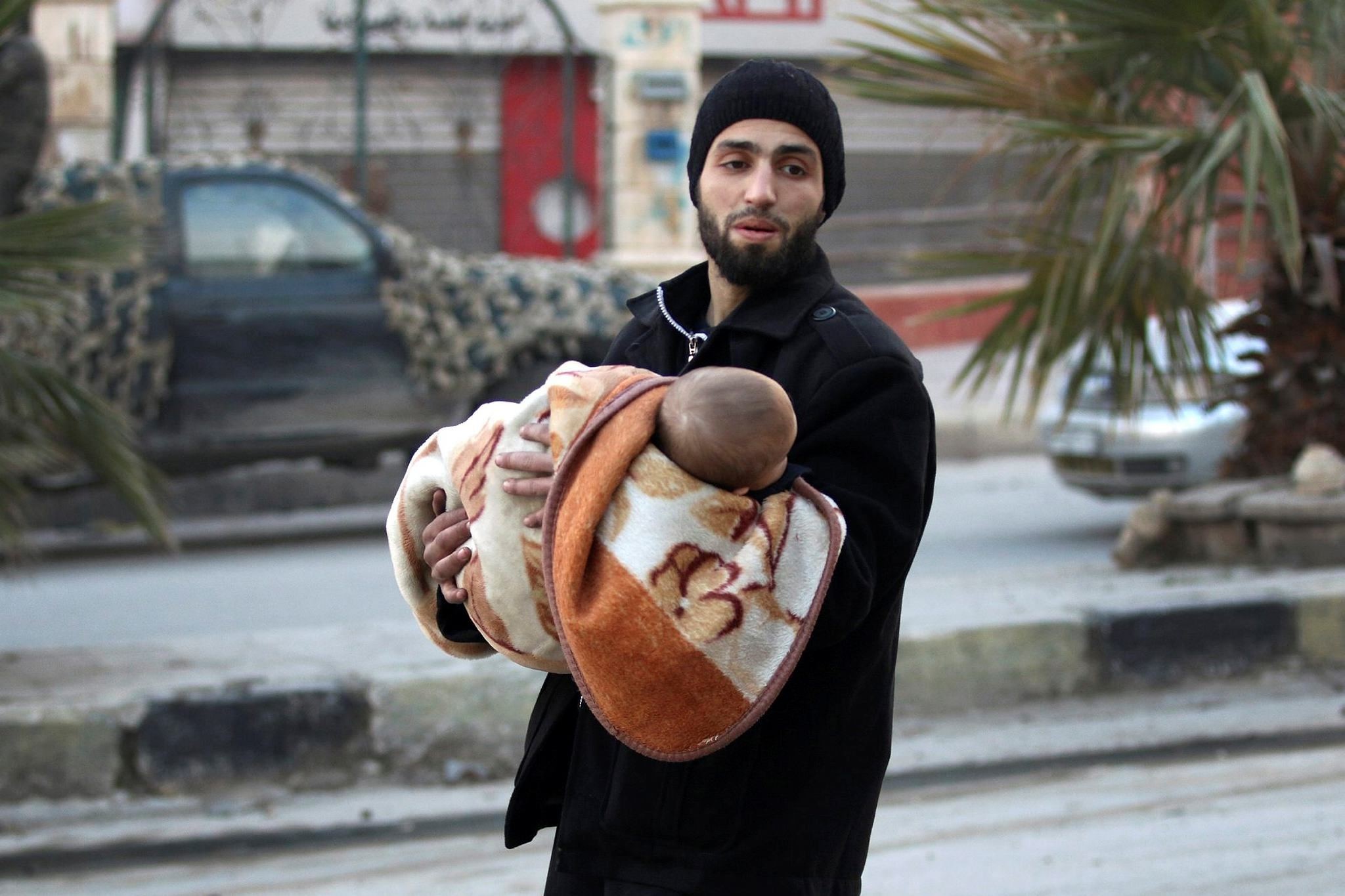 A man carries a child as he flees deeper into the remaining opposition-held areas of Aleppo, Syria, Dec. 12.
by Compiled from Wire Services Dec 14, 2016 12:00 am

As the crucial battle for Aleppo nears its end, Bashar Assad's forces and allied Shiite militia executed dozens of civilians in Aleppo including women and children, the U.N. reported, revealing a human tragedy

Amid reports of atrocities against civilians in east Aleppo, Bashar al-Assad forces and an allied Shiite militia have killed civilians in eastern Aleppo, including 82 people in four different neighborhoods in the last few days, the U.N. reported.

Rupert Colville, spokesman for the U.N. human rights office, voiced deep fears of retribution against thousands of civilians still believed to be holed up in a "hellish corner" of less than a square kilometer of opposition-held areas.

"In all as of [Monday] evening we have received reports of pro-government forces killing least 82 civilians, including 11 women and 13 children, in four different neighborhoods," Colville told a news briefing, adding that there could be "many more." "The reports we had are of people being shot in the street trying to flee and shot in their homes." Jens Laerke, a U.N. humanitarian spokesman, said that it looked like "a complete meltdown of humanity in Aleppo."

The fall of Aleppo would deal the opposition their worst defeat since the beginning of Syria's conflict in 2011, and leave pro-Assad forces in control of the country's five major cities.

With the latest gains, the endgame for Aleppo, which has been carved up between Assad's forces and the opposition for the past four years, appears to be drawing even closer. If Aleppo - the country's former commercial hub - is captured by Assad troops, it would be a turning point in the conflict, putting the four largest cities in Syria and the coastal region back under Assad control.

The U.N. human rights chief says the "crushing of Aleppo" doesn't amount to the end of Syria's war and insists it could become more dangerous "if the international community continues to collectively wring its hands." Zeid Ra'ad al-Hussein yesterday decried the bloodshed in Aleppo, including "the wanton slaughter of men, women and children," and warned of a possible repeat in places like Douma, Raqqa and Idlib that are controlled by opposition fighters or the radical Daesh group.

In yesterday's statement, Zeid said international law requires that all people detained must be treated humanely. But he also called for "urgent measures" to help protect those who flee, "given the terrible record of arbitrary detention and torture in Syria even prior to the start of this conflict" nearly six years ago. He said U.N. officials were documenting rights violations against the Syrian people "with the firm conviction that one day those who are responsible will be held to account."

Rami Abdurrahman of the Britain-based Syrian Observatory for Human Rights said hundreds of bodies are still under the rubble. The International Committee of the Red Cross urged all fighting to stop in Aleppo to spare civilian lives. It said that thousands of people in eastern Aleppo with no part in the violence "have literally nowhere safe to run." "In order for this to happen, we appeal to the parties to put humanity ahead of military objectives," said ICRC's head of delegation in Syria, Marianne Gasser, who is currently in Aleppo.

Aleppo is the focal point of the six-year war in Syria. Assad said earlier he was determined to retake the country's largest city and former commercial capital as his forces have maintained a siege on the opposition-held eastern quarters since September.
Last Update: Dec 15, 2016 12:56 pm
RELATED TOPICS