Syrian children: We’ll grow up and free Aleppo as soon as we become young men 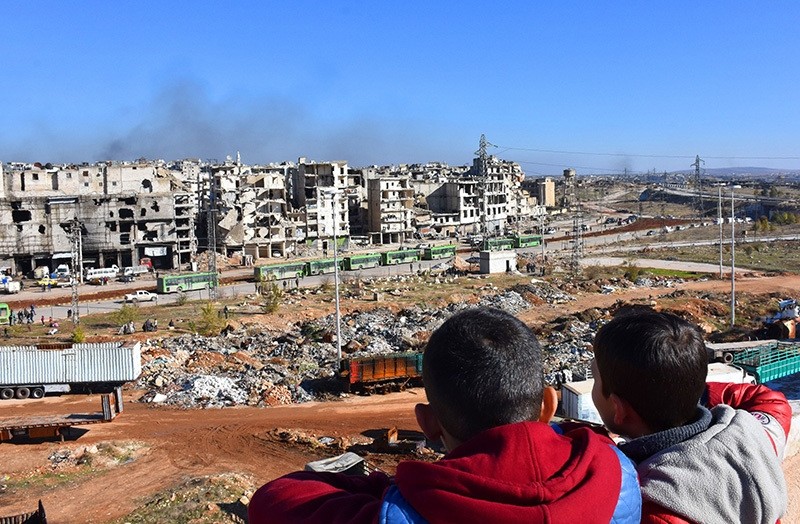 Syrian children watch on as buses depart during an evacuation operation of moderate opposition members and their families from eastern Aleppo on December 15, 2016. (AFP Photo)
by Daily Sabah Dec 16, 2016 12:00 am

Syrian children have released a video on Twitter on Friday amid the chaotic atmosphere during the continuing evacuation operation, which has drawn much attention on the social media platform.

In the footage, Syrian boys tell the camera "We're now leaving Aleppo, but we'll come again when we grow up and we'll free Aleppo. All my brothers and I together will return and save Aleppo." The words have prompted emotional tweets in reply.

The evacuation operation, which aims to move injured civilians and moderate opposition members from eastern Aleppo which is under the attack of pro-regime Iran-backed forces, started on Thursday.

But, as the footage shows, the Syrian children, who have suffered traumatic experiences since the beginning of the deadly Syrian civil war, are still unable to feel comfortable, despite the rescue operation.

Syrian children have witnessed the deaths of thousands, often including their parents or relatives, bomb shelling and sounds of explosions or fire.

Meanwhile, the operation of the evacuation of civilians and moderate opposition has been suspended, regime officials said on Friday. The news came minutes after Reuters said explosion sounds were heard at the location from where evacuation buses were departing.

The operation had previously been sabotaged by the Iran-backed militias, killing four civilians and wounding several people on Thursday when the first evacuation convoy departed from Aleppo.