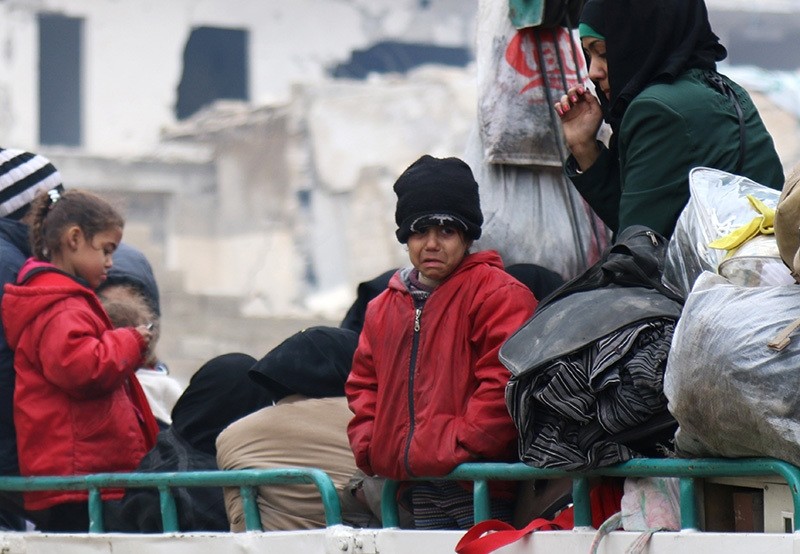 Syrian opposition officials announced Saturday that new a new deal has been reached with the Assad regime to completely evacuate the opposition-held enclave in eastern Aleppo.

Earlier reports indicated evacuations from east Aleppo were suspended as negotiations were ongoing between both sides, especially regarding the villages of Foua and Kfarya, lying in the opposition-controlled region of northwestern Syria.

The new deal foresees the complete evacuation of the civilians in the eastern Aleppo.

The opposition's Britain-based Syrian Observatory for Human Rights said the evacuation of some 4,000 people, including wounded, from the villages of Foua and Kfarya was expected to start Saturday.

The Aleppo evacuation was suspended Friday after a report of shooting at a crossing point into the enclave by both sides of the conflict. Thousands were evacuated before the process was suspended. The Assad regime said the village evacuations and the one in eastern Aleppo must be done simultaneously, but the rebels say there's no connection.

Hezbollah's Military Media said the new deal includes the rebel-held towns of Madaya and Zabadani near the border with Lebanon where tens of thousands of people are trapped under siege by Assad regime forces and the Lebanese group.

Russian defense ministry also said on Saturday that the evacuation of opposition fighters from Aleppo has opened new possibilities for ceasefires elsewhere in Syria.

Assad regime, backed by Russian airstrikes in the air and thousands of Iran-backed militias, have recently made significant advances against the opposition-held eastern Aleppo.

President Recep Tayyip Erdoğan and his Russian counterpart Vladimir Putin had brokered an evacuation deal on Tuesday to evacuate civilians from the besieged enclave. However, the cease-fire and evacuation deal have so far been breached multiple times by pro-Assad, Iran-backed militia groups.

Kazakh President Nursultan Nazarbayev also discussed in a phone call with his Turkish and Russian counterparts the possibility of hosting Syria talks in Astana.

During the conversation, Nazarbayev discussed with Erdoğan and Putin the regional and international developments, according to a statement issued from president's press office late Saturday.

The statement said Erdoğan and Putin expressed their "willingness" to hold a meeting between the Syrian regime and opposition in Astana.

It added Nazarbayev expressed his "readiness" to provide a platform for talks in Astana.