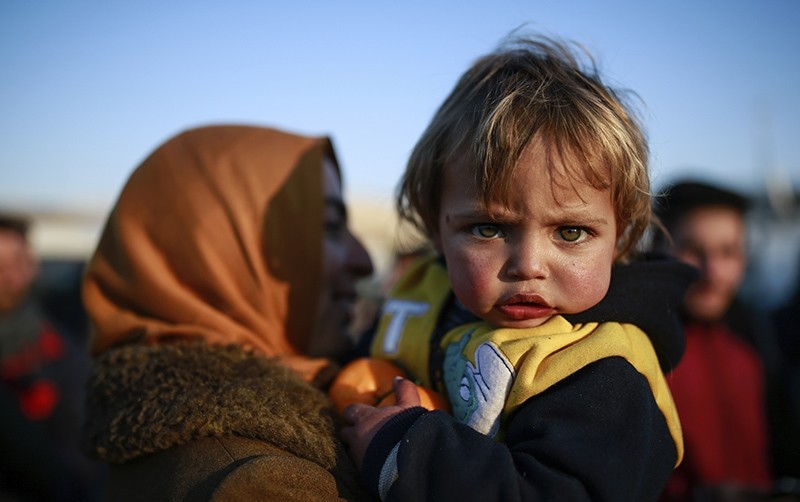 Ritach Halif, 2, is carried by her mother, after the family which came from Idlib, Syria, crossed into Turkey at the Cilvegozu border gate (AP Photo)
by reuters Dec 19, 2016 12:00 am

The Syrian Observatory for Human Rights, a Britain-based war monitor, said on Monday 10 buses had left the besieged Shiite Muslim villages of al-Foua and Kefraya near Idlib carrying evacuees through opposition-held territory towards Aleppo.

The evacuation of wounded and other civilians from the villages is a condition for the evacuation of people in the besieged opposition zone of Aleppo, Assad regime media reported on Sunday.

The evacuation of civilians and opposition fighters from Aleppo also resumed on Monday.

Dozens of buses carrying thousands of people from Aleppo's tiny opposition zone reached opposition-held areas of countryside to the west of the city, according to a United Nations official and the Syrian Observatory for Human Rights, a monitoring group.

The evacuation of civilians, including wounded people, from the two villages which have been besieged by opposition groups for years, was a condition for the regime and its allies to allow thousands of fighters and civilians trapped in Aleppo to depart.

Syrian regime TV and pro-Assad stations showed the first four buses arriving in Aleppo from the besieged villages, accompanied by pick-up trucks and with people sitting on their roofs.

Later on Monday, the Security Council will vote in New York on a resolution to allow U.N. staff to monitor the evacuations. The draft resolution was the result of a compromise between Russia and France, and the United States said it was expected to pass unanimously.

On Sunday, some of the buses sent to al-Foua and Kefraya to carry evacuees out were attacked and torched by armed men in opposition-controlled areas.

That incident threatened to derail the evacuations, the result of intense negotiations between Russia - the main supporter of Assad regime - and Turkey, which backs some large opposition groups.

At stake is the fate of thousands of people still stuck in the last opposition bastion in Aleppo after a series of sudden advances by the regime forces and allied Iran-backed militias under an intense bombardment that pulverised large sections of the city.

They have been waiting for the chance to leave Aleppo since the ceasefire and evacuation deal was agreed late last Tuesday, but have struggled to do so during days of hold-ups. The weather in Aleppo has been wet and very cold and there is little shelter and few services in the tiny opposition zone.