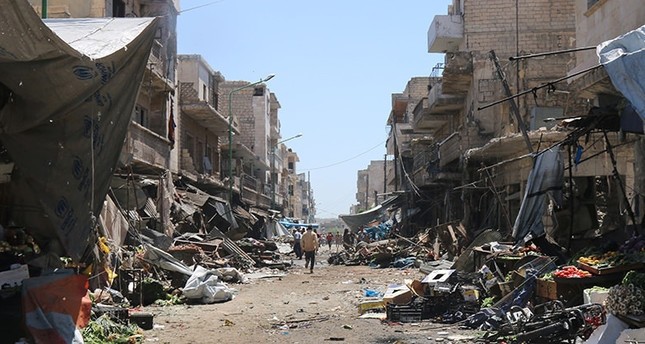 Syrians look at the damage following an air strike on a vegetable market in Maaret al-Numan, in Syria's northern province of Idlib, on April 19, 2016 (AFP Photo)
by Compiled from Wire Services Jan 02, 2017 12:00 am

About 10 Syrian opposition groups announced Monday they were suspending talks about planned peace negotiations this month in the Kazakh capital Astana, due to "violations" by Damascus of a four-day old truce.

"As these violations are continuing, the factions announce... the freezing of all discussion linked to the Astana negotiations," they said in a joint statement, referring to talks planned for late January organised by Russia, which supports the Syrian regime, and Turkey which backs the opposition.

The Syrian regime and its allies have violated a ceasefire 77 times since it went into effect late last week, the Syrian Network for Human Rights (SNHR), a London-based NGO, declared in a report issued Monday.

"The Syrian regime committed 72 [ceasefire] violations while Russia was responsible for five breaches committed when it shelled central Hama and northern Aleppo," the report asserts.

According to the SNHR, its report is based on personal interviews with survivors of recent attacks, the relatives of victims and eyewitnesses.

The NGO also called on Russia -- as a guarantor of the ceasefire agreement -- to pressure its allies in Damascus and Tehran to abide by the terms of the deal.

Last Friday night, the ceasefire took effect across Syria, which since 2011 has been locked in a devastating civil war.