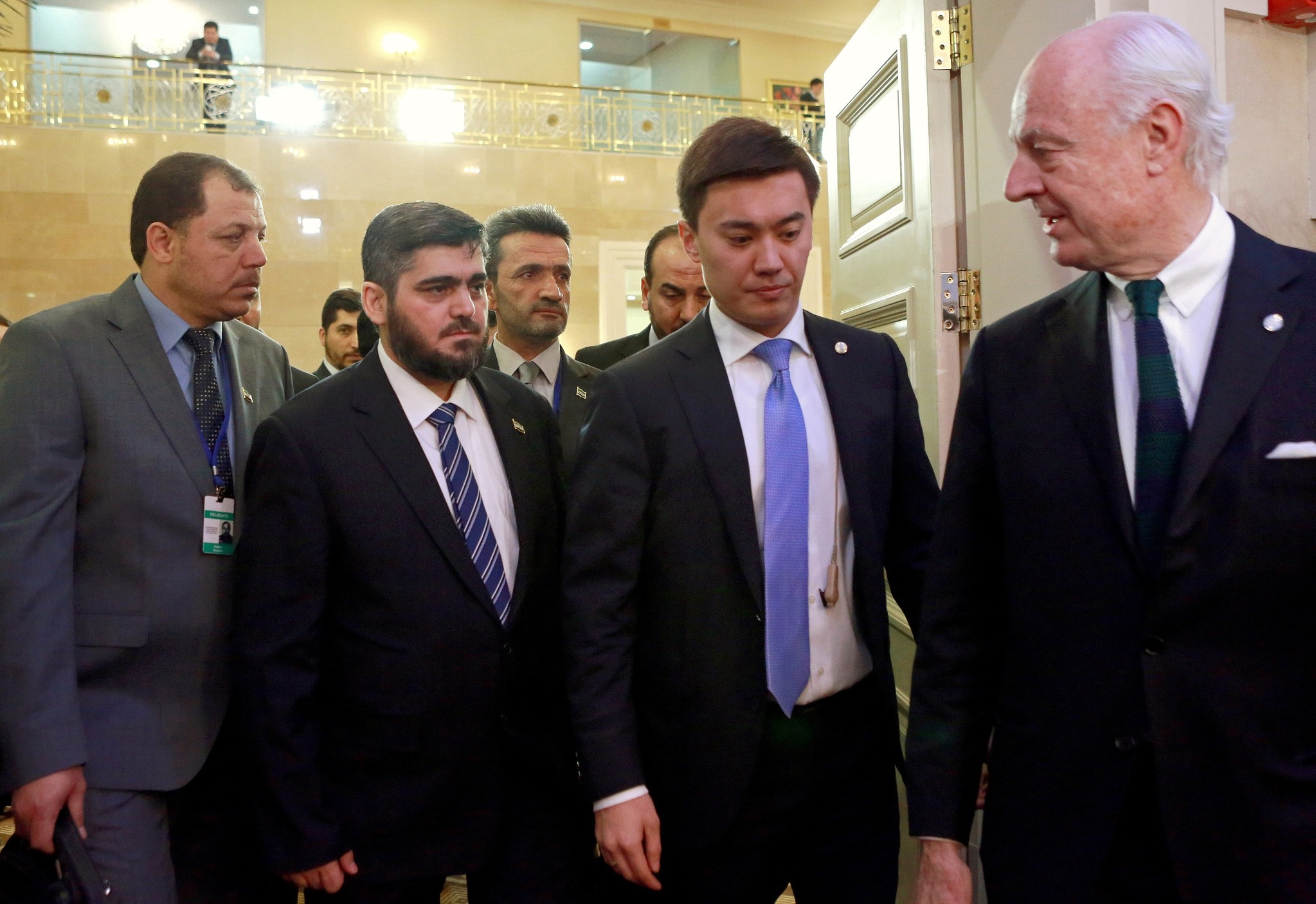 The talks had been billed as the first time armed opposition groups would negotiate directly with Bashar al-Assad's regime since the conflict erupted in 2011.

"If the negotiations succeed, then we are with the negotiations," opposition spokesman Osama Abu Zeid said. "If they don't succeed, unfortunately we'll have no choice but to continue fighting."

The opposition members' announcement came as Russia's defense ministry said its warplanes had bombed the Islamic State group in the area around Deir Ezzor in eastern Syria, where regime forces have been fighting the jihadists.

Opposition spokesman Yehya al-Aridi said the opposition backed out of the first round of direct talks in Astana because of the regime's continued bombardment and attacks on a flashpoint area near Damascus.

A session of indirect negotiations began after 1200 GMT following a short break in the talks.

A Turkish official told journalists that "it is necessary to focus on reinforcing the ceasefire" agreed last month, hoping that "confidence building steps that could be obtained from Astana talks will contribute to the political process in Geneva."

Negotiations in the Kazakh capital Astana coincide with a rapprochement between regime ally Russia and opposition backer Turkey, who together brokered the current truce in December after months of US disengagement in the conflict.

Several rounds of failed talks in Geneva saw political opposition figures take the lead in negotiating with the regime.

But in Astana, the 14-member opposition delegation is composed solely of opposition members leading the armed uprising, with members of the political opposition serving as advisors.

The initiative has been widely welcomed, but the two sides arrived in Astana with apparently divergent ideas on their aim.

Chief opposition negotiator Mohammad Alloush said in his opening statement that the opposition was focused on bolstering the nationwide truce, while Assad has insisted opposition members lay down their arms in exchange for an amnesty deal.

"We came here to reinforce the ceasefire as the first phase of this process," Alloush said in comments broadcast online. "We will not proceed to the next phases until this actually happens on the ground."

Damascus has also called for a "comprehensive" political solution to a conflict that has killed more than 310,000 and displaced more than half of Syria's population.

The head of the regime delegation, Syria's UN ambassador Bashar al-Jaafari, said in his opening comments carried by the country's SANA state news agency that he hoped the talks "will reinforce the cessation of hostilities".

He added the regime was keen to separate the opposition members from Daesh and former Al-Qaeda affiliate Fateh al-Sham Front.

Delegation spokesman Abu Zeid said the opposition members were concerned with "more than just a ceasefire".

"The issue is putting monitoring, investigation and accountability mechanisms in place," he told AFP. "We want these mechanisms so that this doesn't play out over and over."

Previous pushes for a long-term ceasefire have faltered, with both sides trading accusations over violations.

Syrian state media said the regime had met the Iranian delegation as well as UN Syria envoy Staffan de Mistura ahead of Monday's talks, to discuss their positions.

In his opening statement published by the UN, de Mistura said it encouraged the talks' organisers "to create a mechanism to implement the consolidation and de-confliction ceasefire measures, and to see what else can be done to build confidence."

"This is not a replacement for the Geneva process," opposition negotiator Fares Buyush told AFP, referring to the UN-hosted political negotiations set to resume in the Swiss city next month.

Although Russia and Turkey back opposing sides, they have worked hand-in-hand in recent weeks to try to secure an end to the brutal war and forged a partnership likely to be tested in Astana.

US President Donald Trump's administration was invited to participate in the talks but did not send a delegation.

Washington is instead represented by its ambassador to Kazakhstan, the State Department said, while a European diplomatic source said France and Britain are represented at the ambassador level.

Experts say a breakthrough could see some of the armed opposition join next month's Geneva talks.

"Nearly six years of war demonstrates there is no shortcut to ending it," a Western diplomat told AFP.