Tripartite mechanism by Turkey, Russia and Iran to watch over Syria ceasefire 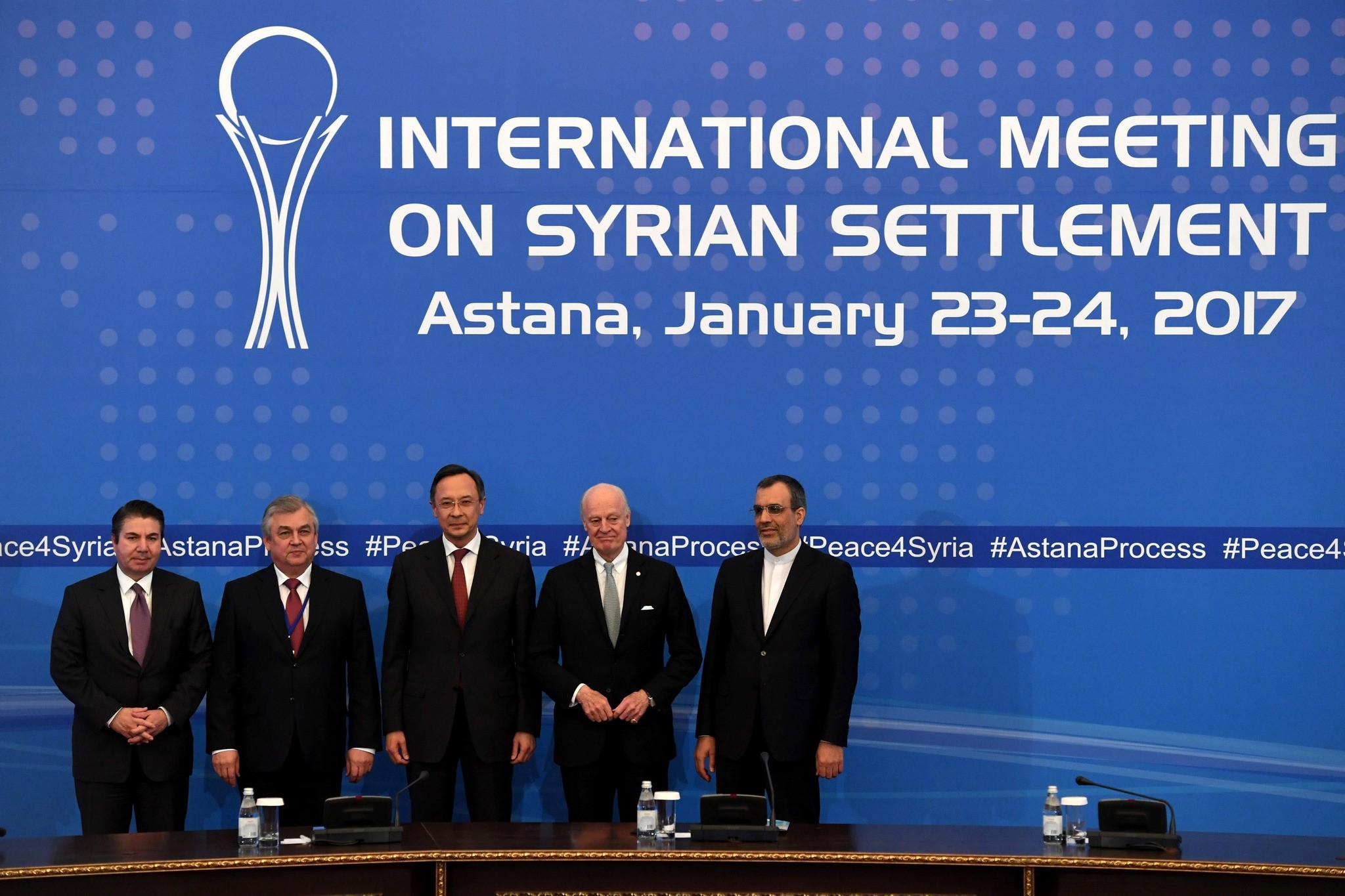 At the Astana peace talks on Tuesday, Turkey, Russia and Iran agreed on a joint mechanism to monitor cease-fire violations in an attempt to stop the bloodshed in Syria.

The three countries gathered in the Kazakh capital on Monday to attend peace talks between the Syrian opposition and the Bashar Assad regime, and pledged to monitor cease-fire breaches across Syria in a coordinated effort on Tuesday. The countries involved in the mechanism will use their influence on violating parties to stop the attacks, added a source speaking to Anadolu Agency.

A closing statement was read out at the end of the talks on Tuesday. According to the statement, the sides agreed that "there is no military solution to the Syrian conflict and it can only be solved through a political process based on the implementation of the U.N. Security Council resolution 2254 in its entirety."

In addition, the statement affirmed that guarantor countries will exert efforts to "consolidate the cease-fire established pursuant to the arrangements signed on Dec. 29, 2016 and supported by the U.N. Security Council resolution 2336." The sides also agreed on the necessity to step up efforts to jumpstart the negotiation process.

Peace talks aimed at ending the Syrian conflict Tuesday entered their second and final day in Kazakhstan's capital Astana. The talks, which focus on extending the cease-fire that came into effect on Dec. 30, 2016, have been brokered by Turkey, which backs the opposition, and Russia and Iran, which support the Assad regime.

Turkey's Deputy Prime Minister Numan Kurtulmuş commented on the Astana talks, saying that Ankara is hopeful about the outcome. "I hope that these talks will continue and in the end, there will be peace in Syria as soon as possible," he asserted. Kurtulmuş said that Turkey is in favor of a peace that is accepted by the whole of Syria.

Ankara is seeking to be at the table regarding Syria's future and asserts its authority on the ground in northern Syria. In addition, Turkish authorities are opening new channels of dialogue with the Kremlin, Tehran and Washington to bring peace to Syria.

Meanwhile, Foreign Minister Mevlüt Çavuşoğlu spoke over the phone on Tuesday with his Russian counterpart about the peace talks, according to a written statement by the Russian Foreign Ministry.

Sergey Lavrov and his Turkish counterpart Mevlüt Çavuşoğlu "stressed the importance of establishing direct contacts between the Syrian government and representatives of the armed opposition to strengthen the cease-fire," said the statement. The ministers agreed to continue to work with the parties in the Astana talks to facilitate a "successful" conclusion, it added. The ministers also agreed on getting "ready" for the resumption of Syria talks in Geneva, Switzerland.

The representatives of the Syrian regime, armed opposition groups, Russia, Turkey, Iran, the U.N. special envoy to Syria, Staffan de Mistura, as well as U.S. Ambassador to Kazakhstan George Krol gathered at the Rixos Hotel at around 10:30 a.m. local time on Tuesday.

"We expect implementations, not only promises," Osama Abu Zaid, a member of the opposition delegation, told reporters on Tuesday. "Turkey, Russia and Kazakhstan are doing what is necessary to make the meeting successful. Concrete steps are needed to be taken to achieve success," Abu Zaid said.

He added the violation of the cease-fire by the regime constituted the "biggest" obstacle. Abu Zaid said there were discussions on a final declaration, adding: "We did not see the draft version. It was not transmitted to us. That is why we cannot speak on this."

Abu Zaid remained evasive when asked if talks could be extended, adding that the decision lays with the guarantor countries.