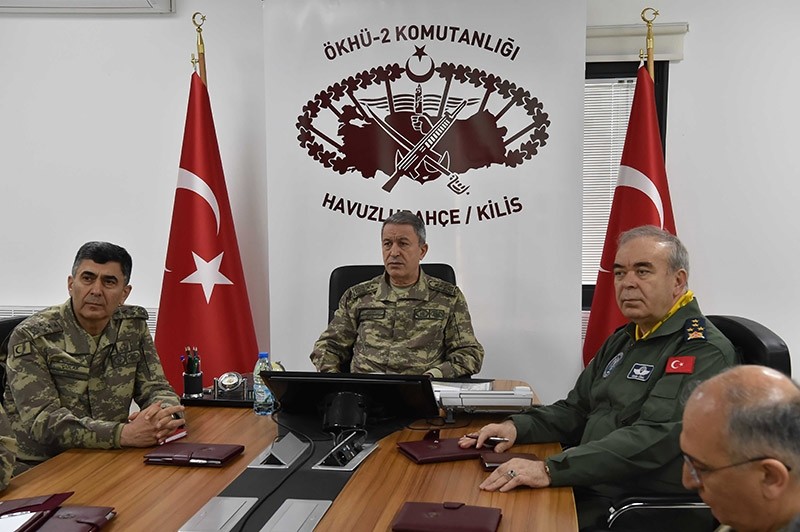 Turkish Chief of Staff General Hulusi Akar (center) is seen in a meeting in Kilis, southeastern Turkey, during his visit to troops stationed at the Syrian border. Feb. 5, 2017.
by Daily Sabah Feb 05, 2017 12:00 am

Turkish Military Chief of Staff General Hulusi Akar has visited on Sunday army troops stationed in the southeastern provinces of Kilis and Gaziantep, bordering war-torn Syria, the military announced in a statement on Sunday.

The statement said that General Akar, accompanied by chiefs of air staff and the army commanders, visited and inspected Turkish troops garrisoned in Kilis and Gaziantep provinces.

General Akar also visited the operation command centers from where the ongoing Operation Euphrates Shield and anti-terror operations are led and coordinated.

The release also noted that Akar's visit in the region is continuing.

On Aug. 24, 2016, Turkey declared that is was exercising its rights of self-defense codified under the U.N. Charter Article 51, and launched Operation Euphrates Shield.

A National Security Council press release on Nov. 30, 2016, stated that the operation's objectives were to maintain border security and confront Daesh terrorism, as well as emphasizing that the PKK terrorist organization, as well as its affiliates the Democratic Union Party (PYD) and People's Protection Units (YPG), will not be allowed to establish a corridor of terror on Turkey's doorstep.