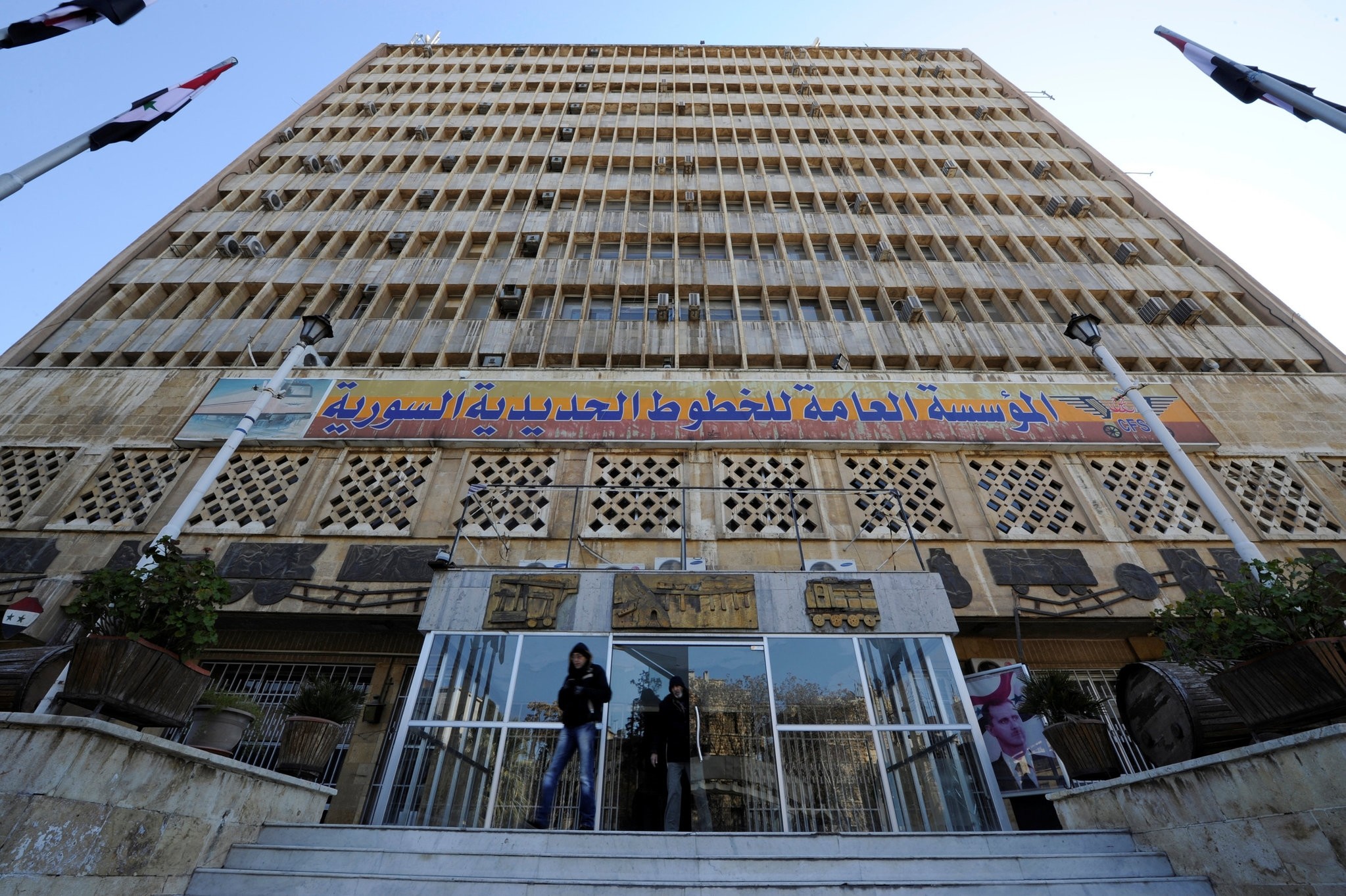 A general view shows the building housing the Syrian railways offices in Aleppo, Syria February 1, 2017. Picture taken February 1, 2017. REUTERS
by Feb 10, 2017 12:00 am
In the ruins of the Sabbagh textile factory in Aleppo's Belleramoun Industrial Zone, one wall smashed open by shellfire, a Belgian-made weaving machine stands idle while a family carefully strips the office of wood panelling for fuel.

The scene attests to the devastation visited on the economic infrastructure of Aleppo, Syria's most important industrial hub before the war, and the challenges facing any long-term plan to revive the city.

The regime is gradually restoring some basic infrastructure in Aleppo: a train service has started operating inside the city, the airport is scheduled to open soon and bulldozers are clearing streets of barricades and other debris.

But the immense scale of destruction across swathes of the city, and the ongoing war nearby, means any wider redevelopment of Aleppo or its industrial base is unthinkable for now.

"Our situation is very similar to Berlin in 1946 or Tokyo in 1946. So you have a destroyed city," said Feras al-Shehabi, chairman of the Aleppo Chamber of Industry, adding he believed strongly in the city's future.

Unlike those cities, which benefited from massive, post-war Western aid, Aleppo is in a country still at war, economically shackled by international sanctions, without financial resources and deprived of expertise by years of emigration.

For Bashar al-Assad, whose troops recaptured Aleppo in December, resurrecting the city is important not only for symbolic reasons but because of its status as Syria's economic heart.

Before the war it had about a third of Syria's industrial companies and workers, Central Bureau of Statistics figures from 2010 show. All of Aleppo's 65,000 factories suffered some form of damage or looting, Shehabi said.

Looking out at night across east Aleppo - where opposition held out for four years - stars shine bright above a dark city deprived of electricity, almost entirely unlit but for a few car headlights. Tens of thousands of people living in the ruins use paraffin lamps.

A drive through the area, several kilometres (miles) across, revealed entire blocks without habitable buildings, fallen road bridges and districts cut off by rubble and with vehicles piled high as barricades across all the side streets.

In the Belleramoun industrial zone, near a frontline in fighting, one factory after another stood smashed, with gaping holes in walls and ceilings, burned-out vehicles lying nearby and all machinery stripped or ruined.

Although the army has retaken Aleppo, the crackle of automatic fire and deep blasts of air strikes from insurgent territory near Belleramoun were reminders that the city is all but surrounded by rebels, accessible only by a precarious road.

A large number of checkpoints throughout the city and frequent patrols through east Aleppo by Russian troops in armored personnel carriers demonstrate the iron control over former opposition districts held by the regime and its allies.

Aleppo remains isolated from other regime areas, accessible only by a sometimes dangerous branch road through a narrow strip of army-held territory between land controlled by the opposition on one side and Daesh on the other.

In the northern stretch, where the road passes close to territory held by Daesh, a military position under a small hill contained smashed concrete buildings and charred tanks, evidence of a recent attack by the militant group.

Daesh's control of Aleppo's main water source on the Euphrates river, and its hold over Syria's natural gas fields whose product is needed to power electricity stations, has also deprived the city of reliable utilities for years. Most people use power generators and water delivered by tanker.

For all the destruction in east Aleppo and around the city fringes, however, most of western Aleppo is in good condition, the French colonial boulevards of Azizia district playing host to smart cafes and restaurants that fill each evening.

The two sides of the city, divided for more than four years, are now connected by short road or rail journeys.

On the short ride from the elegant stone hub of Baghdad Station in west Aleppo to Jibreen in the east, people stopped in the streets to cheer and wave at hundreds of passengers on a train not seen for years.

The old map in the office of Najib Fares, head of Syrian railways, showed how all main rail routes hit the frontlines almost as soon as they leave the city. But he said he plans to extend new lines inside Aleppo to its industrial zones.

Baghdad Station's main building is now a temporary office dealing with identity papers, where crowds push against the windows of its old ticket counters.

Behind the Sabbagh factory is the house its manager lived in, green graffiti over the door proclaiming it to be the property of "The Movement of the Islamic Tomorrow", one of the opposition groups that held that area.

The tail fin of a mortar shell lies on the street nearby.

Glass gauges and delicate spindles on the weaving machines are still intact, but motors and other machinery parts are missing.

In the Chamber of Industry, Aleppo businessmen - many of whom left during the conflict - hovered in the waiting room.

Large numbers of Aleppo businesses have temporarily moved to Latakia on the coast and only about 10 percent of industrialists remain in the city, Shehabi said.

Khaldoun Souccar, who owns two clothing factories which he says were sacked by rebels, said he did not plan to resume his previous business because of the cost of new machinery.

"This factory was built by my father and grandfather, but I'm thinking of stopping with this and starting again with a smaller project," he said.