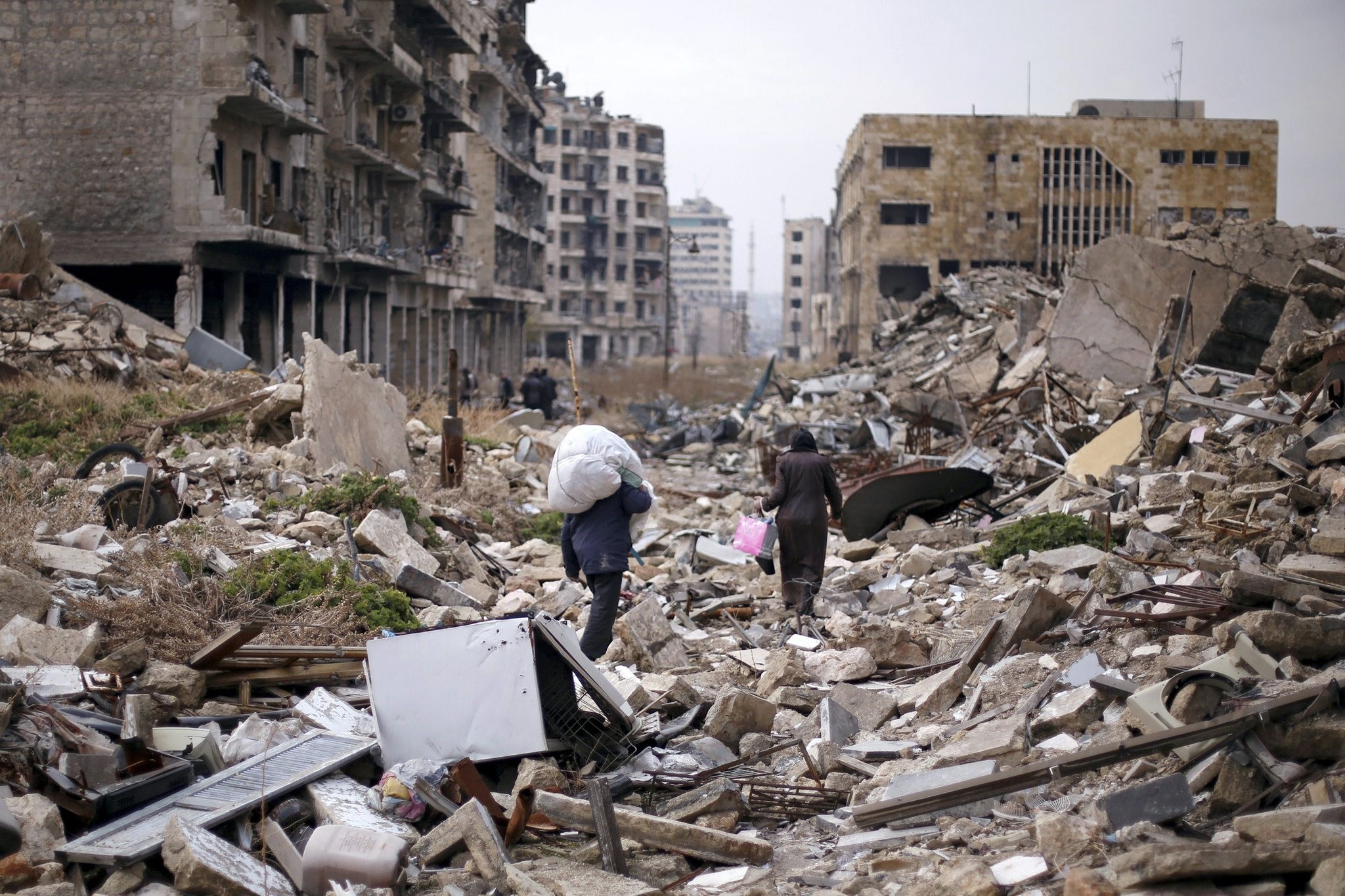 People walk amid the rubble as they carry belongings that they collected from their houses in the regime controlled area of Aleppo, Syria December 17, 2016. (Reuters Photo)
by Compiled from Wire Services Feb 19, 2017 12:00 am

The leading Syrian moderate opposition body on Sunday lambasted escalating attacks by Assad regime forces as a "bloody message" aimed at sabotaging peace talks that are due to open in Geneva next week.

The High Negotiations Committee (HNC) said recent attacks near Damascus, Homs city, and elsewhere were "obstructing the efforts aimed at a political transition in Syria".

"It is a bloody message from a criminal regime just a few days ahead of political negotiations in Geneva that demonstrates its rejection of any political solution," the HNC said in an online statement.

Armed opposition groups went even further, accusing the regime of eliminating any shot at a peaceful resolution to Syria's war.

In a statement released Sunday, the opposition said they had supported a political solution to end the bloodshed in the country, but that war had been "imposed" on them by the Syrian regime and its allies.

The opposition, mostly backed by Turkey, who attended two rounds of talks in the Kazakh capital Astana said the shelling around Damascus, Homs, and northwest Idlib "undermines the ceasefire and finishes off opportunities for a political solution," and they reserved the right to respond to these attacks.

At least 16 people were killed on Saturday when regime forces shelled a funeral near Damascus, and three civilians were killed in air strikes on the last opposition-held district of Homs city, according to the Syrian Observatory for Human Rights.

In addition, seven civilians were killed on Sunday, in airstrikes on a town in southern Syria, while an exchange of shelling in Daraa city killed a nurse and a young girl, the monitor said.

Peace talks in Geneva are set to begin on February 23, featuring a new chief opposition negotiator on behalf of the HNC, lawyer Mohammed Sabra.

Formed in December 2015, the HNC has risen to prominence as the leading umbrella group for Syrian opposition factions.

Sabra will replace Mohamed Alloush of the Army of Islam opposition group, which said it would participate in the delegation in an advisory capacity.

Meetings in Astana have focused on confidence-building measures and reinforcing a frail, seven-week truce deal also brokered by Ankara and Moscow.

By comparison, negotiations in Geneva are expected to address the key issues that divide the two sides, including the fate of Bashar al-Assad.
His role in Syria's future remains the primary sticking point, with the opposition insisting that he leave at the beginning of any transition period.