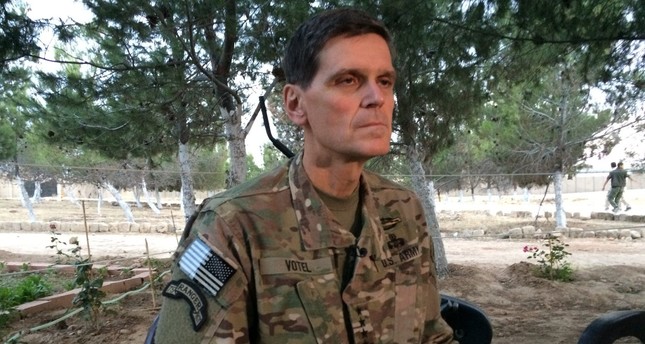 General Joseph Votel, the commander of the U.S. Central Command which coordinates anti-Daesh operations in Iraq and Syria, paid a secret visit to Syria Friday, according to a journalist and spokesman for the Syrian Democratic Forces (SDF). Pentagon refused to talk about the whereabouts of Votel but confirmed that he was in the Middle East.

Talal Sello, a spokesman for the SDF, said that General Votel met SDF commanders in northern Syria and discussed with them the developments related to the latest military campaign against Daesh. Mutlu Çiviroglu, a Syrian and Kurdish affairs analyst working for the Voice of America, said on Twitter that General Votel visited the Kobani and Raqqa front, where SDF and YPG forces are waging battle against Daesh.

"Gen. Votel is currently visiting the Middle East as a normal part of his duties to visit the forces under his command and to meet with regional military leaders. Today, he is visiting various locations in the Combined Joint Task Force - OIR area of responsibility. Due to operational security considerations, we will not be providing real-time information about his current whereabouts," Major Adrian J.T. Rankine-Galloway, a Pentagon spokesman, told Daily Sabah in a written statement.

Votel made a similar visit to Syria back in May 2016 which infuriated Turkish officials who consider the SDF as a shell organization largely controlled by terror group PKK's Syrian arm, the YPG.

The timing of the visit is particularly interesting due to the fact that the White House required a 30-day review on Pentagon's anti-Daesh fight which is expected to be completed Monday. The review would be very crucial for the ongoing Raqqa operation, for which Turkey offered the U.S. alternative plans to take control of the Daesh bastion while preventing the YPG from entering the city.

Share on Facebook Share on Twitter
Previous in Syrian Crisis Russia will use its veto to block a draft UN resolution imposing sanctions... Next in Syrian Crisis Rescue workers from Syria's White Helmets group -- the subject of...
DAILY SABAH RECOMMENDS